Who Will Win Tonight’s Debate as Dissembler in Chief? 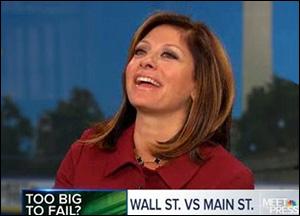 One person to watch as much as the candidates this evening is Maria Bartiromo for a pro-corporate/anti-government tone to her questions. Bartiromo has regularly sided with corporate bigwigs accused by the government of fraud and wrongdoing. She was also once the target of media scrutiny herself for getting too close to a company she covered – Citigroup – including taking trips on their corporate jet.

For a little background on the kind of questions you may see coming from Gerard Baker of the Wall Street Journal, see our February article here.

It’s possible that we could be surprised and see some gutsy questions, given the public mood and the unprecedented dissembling by some of the top candidates in both the Republican and Democratic parties.

Questions to Ben Carson on his serial massaging and dodging of facts (see here and here) should not let him off the hook with his well-honed rant against the liberal media.

Donald Trump should be grilled on his tax plan and his claim that it will not increase the deficit. The Pulitzer Prize-winning PolitiFact says the claim is “false,” writing as follows:

“Both right- and left-leaning groups found that Trump’s plan could lead to at least a $10 trillion revenue loss in a decade, without factoring in interest.

“The liberal Citizens for Tax Justice pegged the cost of Trump’s plan at $12 trillion over 10 years and pointed out that 37 percent of the tax cuts would go to the top 1 percent.

“Trump’s plan, according to the free market-oriented Tax Foundation, would cut taxes by almost $12 trillion and also lead to an 11 percent higher GDP. With this projected growth, Trump’s plan would still reduce revenues by $10.14 trillion.”

Likewise, PolitiFact judges Carson’s claim that his tax plan won’t leave a $1.1 trillion hole in government spending to be false. He should be asked to clearly explain his math.

We are certainly not suggesting that the only candidates running for Dissembler In Chief are Republican. We judge Hillary Clinton’s explanation for using a personal server for her emails while heading a highly sensitive post as Secretary of State to be insulting to Americans’ intellect. Clinton’s excuse has revolved around her statement: “What I did was allowed by the State Department, but it wasn’t the best choice.”

The State Department is not the last word on managing Federal records. The National Archives and Records Administration has this to say on the subject:

The public’s ability, and that of an inquiring press in a democracy, to effectively and efficiently obtain responses to Freedom of Information Act requests hinges on government leaders respecting the rules for archiving government documents, not making personal decisions on what should be shredded from a personal server detached from government oversight.