The Republican Debate: Almost Every ‘Fact’ About Wall Street Was False 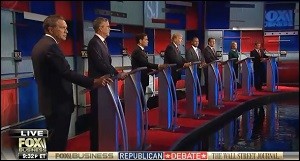 “Did you see the attack ad about me during the GOP debate tonight? A right-wing group launched a full-scale assault on the Consumer Financial Protection Bureau – the watchdog we set up after the 2008 financial crisis to fight back when big banks try to cheat people on credit cards, mortgages, and other financial products…If the Republicans want a fight over the CFPB, I say, ‘Bring it on.’”

The Consumer Financial Protection Bureau (CFPB) is one of the few positive outgrowths of the Dodd-Frank financial reform legislation passed by Congress in 2010 after the epic financial crash in 2008. It’s a legitimate and real champion of the little guy.  But because the agency has been exposing student loan frauds and abusive credit card and mortgage practices by the biggest Wall Street banks, it’s been a perpetual target of Congressional Republicans who receive large amounts of campaign financing from these banks who want to disband it. 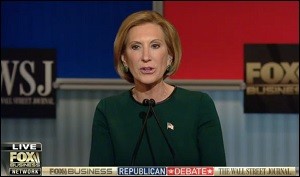 During the Republican debate, Carly Fiorina, the former CEO of Hewlett-Packard, repeated a well worn, but false, canard about the CFPB while demonstrating total ignorance of what caused the financial crash of 2008.  Fiorina stated:

“Can I just — could I just say, as a chief executive who’s had to make tough calls to save jobs and to grow jobs, I think what’s interesting about Dodd-Frank is it’s a great example of how socialism starts.

“Government created the problem of a real estate boom. How did we create it? Under Republican and Democrats alike, Fannie Mae and Freddie Mac, everybody gathered together, Republicans and Democrats, and said, ‘home ownership is part of the American dream. Let’s create a bubble…’

“And now what do we have with Dodd-Frank? The classic of crony capitalism. The big have gotten bigger, 1,590 community banks have gone out of business, and on top of all that, we’ve created something called the Consumer Financial Protection Bureau, a vast bureaucracy with no congressional oversight that’s digging through hundreds of millions of your credit records to detect fraud.

“This is how socialism starts, ladies and gentlemen. We must take our government back.”

Actually, the U.S. is struggling under a viral strain of corporate fascism, not socialism. Corporate lobbyists now write legislation, repeal vital financial legislation through backdoor tricks, finance the campaigns for the Executive and legislative branches of government at a level at which ordinary people cannot possibly compete. Corporations have also privatized key institutions in society: prisons, schools and, increasingly, the nation’s courts, as exposed in a recent three-part investigative series by the New York Times.

Fiorina is also dead wrong that the government created the housing bubble. Wall Street banks and the rating agencies created the housing bubble – in other words, the Mother Ship of the free market-Ayn Randian disciples. Wall Street was able to pay Moody’s and Standard and Poor’s lucrative fees for assigning triple-A ratings to pools of toxic subprime mortgages which the Wall Street banks could then peddle (securitization) as top-grade debt to financial institutions and investors in the U.S. and around the world. When a few foreign banks went belly up from this toxic debt, big banks here in the U.S. were afraid to lend to one another over fear of who would be next. Credit seized up and then iconic names on Wall Street like Bear Stearns and Lehman Brothers blew up, followed by other household names in finance like AIG, Fannie and Freddie. The behemoth Wall Street bank, Citigroup, and its off balance sheet Cayman Islands debt and teetering status also played a significant role in worsening the extent of the crash and the bailout, as documented by the Financial Crisis Inquiry Commission report and multiple books by insiders.

It is also false for Fiorina to say the CFPB is “a vast bureaucracy with no congressional oversight.” The CFPB is seriously underfunded given its mandate and it issues a semi-annual report to Congress along with in person testimony and questioning from the legislative branch.

Ted Cruz, the Texas Senator running for President, also made a stunningly false statement about the cause of the 2008 crash. Cruz stated:

“Yes. Now, let’s be clear, there is a role for the Federal Reserve — what the Fed is doing now is it is a series of philosopher-kings trying to guess what’s happening with the economy. You look at the Fed, one of the reasons we had the financial crash is throughout the 2000s, we had loose money, we had an asset bubble, it drove up the price of real estate, drove up the price of commodities, and then in the third quarter of 2008, the Fed tightened the money and crashed those asset prices, which caused a cascading collapse.”

It is difficult to imagine a more incorrect statement. The Federal Reserve has not raised its Federal Funds rate since June 2006. In fact, it was rapidly cutting its interest rate in 2007 and 2008. From September 18, 2007 through December 16, 2008 when it hit the zero-bound range, the Fed cut rates 10 times. Never once in that period of time did it raise interest rates.

John Kasich, the Governor of Ohio, did not appear conversant with the fact that the Federal Deposit Insurance Corporation (FDIC) currently insures bank depositors’ money, up to $250,000 per account per bank. That insurance is already backed by the full faith and credit of the United States government.

Kasich’s comments came in response to a question posed by moderator Neil Cavuto of Fox Business News to Ted Cruz as to whether he would let Bank of America fail if it got into trouble in another financial crisis. Cruz said he would let it fail and then walked that back by saying the Fed should serve as lender of last resort. Kasich then jumped into the conservation, at one point saying this:

“As an executive, I would figure out how to separate those people who can afford it versus those people, or the hard-working folks who put those money in those institutions…”

The confusion may have resulted from the way Neil Cavuto phrased his question to Cruz, implying that depositors would be left in the lurch. Cavuto asked:

(See the video clip of the Wall Street questions in the Republican debate below.)

What became apparent from last night’s debate is that the only person running for President who has a crystal clear understanding of how Wall Street, its regulators and the Fed operate is Senator Bernie Sanders of Vermont – who opposed the repeal of the Glass-Steagall Act and sponsored the legislation forcing the Fed to reveal the trillions it had secretly loaned to Wall Street banks to prop them up during the crash. Sanders is also a strong advocate for restoring the Glass-Steagall Act which would separate deposit-taking banks from their casino cousins on Wall Street.

Tragically, Sanders, a Democratic Socialist, has been tarred with the same deception that Fiorina espoused in last night’s debate: that the big threat to the U.S. is socialism, despite flashing alarms everywhere of a corporate takeover of our struggling democracy.