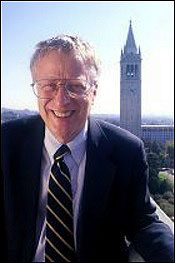 After lamenting in a recent book how Presidents George W. Bush and Obama didn’t answer his letters (Return to Sender: Unanswered Letters to the President, 2001-2015), Ralph Nader has finally been requited by a powerful person in Washington.

Nader had the temerity to write Fed Chair Janet Yellen a letter on October 30, pointing out how the Fed’s zero bound interest rate policy is crimping the spending ability of savers who rely on such things as savings accounts and money market interest for added income to survive. Yesterday, Yellen boldly answered Nader’s letter with a smackdown.

The letter has caused an outbreak of sexism charges against Nader by various writers for his suggestion in the letter that Yellen would be wise to “sit down with your Nobel Prize winning husband, economist George Akerlof, who is known to be consumer-sensitive.” Annie Lowrey at New York Magazine said it suggested Yellen needed things mansplained to her “small lady brain” lest there be “cryfests” and “emotional overeating” at the nation’s central bank.

A number of writers have dismissed Nader’s letter as nonsense. In fact, there is a large segment of seniors who can’t afford to risk their meager life savings in the stock market, who have historically relied on the interest from insured money market accounts, insured certificates of deposit, and U.S. Treasury notes and bills to supplement their pension or Social Security benefits. Those individuals have seen that income cut by half or more since the 2008 crash and the Fed’s slashing of interest rates.

But what about economist George Akerlof? Might he actually have something important to share with Janet Yellen and the rest of us for that matter? In fact, Akerlof has co-authored a recent book with a theory that, taken to its logical conclusion, casts a dangerous light on the very institution his wife heads, the Federal Reserve.

The book, Phishing for Phools: The Economics of Manipulation and Deception, by Akerlof and Robert Shiller, explores “reputation mining” as an underlying cause of the 2008 crash. For example, when iconic, century old Wall Street banks bundled securities and received triple-A ratings from century old, respected ratings agencies like Moody’s and Standard and Poor’s, the investing public believed these were worthy investments even though the underlying assets were subprime mortgages, including mortgages given to NINJAs: No Income, No Job or Assets.

Akerlof and Shiller dig into the weeds of how the financial industry incentivized employees to keep this corrupt system afloat and the structural changes on Wall Street, like investment banks going public and no longer having their own capital at risk, that led to a gambler’s mentality across the industry.

What Akerlof and Shiller did not examine, notably, is how the Federal Reserve, the institution now headed by Akerlof’s spouse, was, and is still, engaging in “the economics of manipulation and deception” and mining its century old reputation.

The Dodd Frank Wall Street Reform and Consumer Protection Act was signed into law on July 21, 2010. It is highly unlikely that Congress would have sent this legislation to the President, giving the Federal Reserve massive new powers in regulating Wall Street banks, had members of Congress known at the time that the Fed had secretly funneled over $13 trillion in cumulative, cut-rate loans to teetering banks – effectively resuscitating them while simultaneously covering up its negligent supervisory role in failing to rein in the excesses that allowed the U.S. financial system to collapse.

It was five months after Dodd Frank was signed into law that the Fed first released details of its myriad lending programs. And, it was not until March of 2011, after the U.S. Supreme Court refused to hear a bank coalition’s challenge to a lower court ruling mandating that the Fed turn over its discount window loan data, as demanded in a multi-year legal battle by Bloomberg News, that the public finally learned of the extent of the epic taxpayer bailout.

After the greatest looting spree in U.S. history by Wall Street banks, the public had been further conned in an egregious form of “reputation mining,” this time aided and abetted by secrecy from the Fed about its massive infusions of cash. As Bloomberg News wrote after analyzing the Fed data:

“Bankers didn’t disclose the extent of their borrowing. On Nov. 26, 2008, then-Bank of America Corp. Chief Executive Officer Kenneth D. Lewis wrote to shareholders that he headed ‘one of the strongest and most stable major banks in the world.’ He didn’t say that his Charlotte, North Carolina-based firm owed the central bank $86 billion that day.

“JPMorgan Chase & Co. CEO Jamie Dimon told shareholders in a March 26, 2010, letter that his bank used the Fed’s Term Auction Facility ‘at the request of the Federal Reserve to help motivate others to use the system.’ He didn’t say that the New York-based bank’s total TAF borrowings were almost twice its cash holdings or that its peak borrowing of $48 billion on Feb. 26, 2009, came more than a year after the program’s creation.”

The Fed and Janet Yellen are now overseeing a system where the bad boys of 2008 are the more dangerous bad boys of 2015, with just six banks out of more than 6,000 controlling over 90 percent of hundreds of trillions of dollars in derivatives and more than 40 percent of all deposits.

Nader is right to be asking questions. Unfortunately, Akerlof, while spot on with the concept of reputation mining, doesn’t take it far enough into the inner sanctum of the Fed. (Watch Akerlof mansplain the crash in the video below.)