Until March 30, 2014, most Americans and even long-term veterans on Wall Street had no idea how the electrical plumbing responsible for transacting buy and sell orders at stock exchanges and other trading platforms actually worked. That all changed on March 30 when author Michael Lewis went on 60 Minutes and told its 12 million viewers that “The United States stock market, the most iconic market in global capitalism is rigged.”

Lewis was promoting his new book, Flash Boys, which detailed in language the public could easily understand, (devoid of the intentionally cryptic acronyms used across Wall Street) how the stock exchanges, mega Wall Street banks and high frequency traders were conspiring through technology to front run orders from unknowing investors.

In the 60 Minutes interview with Steve Kroft, Lewis drilled down to how the legalized theft had escaped the notice of so many market watchers: “If it’s so complicated you can’t understand it, then you can’t question it,” said Lewis.

At first, the Securities and Exchange Commission denied that the markets were “rigged” and simply tried to ride out the public uproar. Then it decided to create an Equity Market Structure Advisory Committee, effectively bringing together in one room the Wall Street people involved in the mad-scientist technology and market rigging devices to hash it out in a public venue.

The Committee most recently held a meeting on October 27, where slurs, barbs and accusations were thrown at opposing sides by meticulously tailored men using their most polite voices.

Jamil Nazarali, head of Citadel Execution Services, landed the best insult of the day with this gem directed at the stock exchanges:

“This industry is the only one that I am aware of where a for-profit public company regulates its customers and competitors. And I understand that you guys think that that’s important but what is it that you guys do that someone else couldn’t do. All those regulatory functions that you described, why couldn’t some other entity do that? Why does it have to be within your four walls?”

Citadel is a hedge fund and dark pool operator. (Dark pools are trading venues which lack full SEC oversight and trade in the dark without public transparency.)

Nazarali heads up Citadel’s trading operations, also known as “execution” services. Nazarali was throwing a jab at the men from the stock exchanges that had given testimony during the full day conference on how they served a public interest function by regulating their members. Dark pools compete with exchanges for customers and trading volume, are typically also broker dealers and members of the exchanges, and resent being regulated by a competitor.

Citadel is an unlikely candidate to be slinging mud, as we explained in an in-depth article on August 14, 2014. 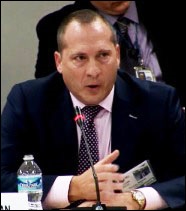 Thomas Wittman, Executive Vice President of the Nasdaq stock market and Global Head of Equities, zinged both the SEC and dark pools, which are also known as “unlit” markets. Wittman told the Committee:

“Given the intense price competition, we question the time and resources spent by the Commission [SEC] analyzing whether exchanges have fully justified proposals reducing their fees. Nearly 40 percent of the executions occur on venues that lack not only pre-trade price discovery but operational and fee transparency. Yet Nasdaq has encountered difficulty in gaining Commission approval for a fee reduction for members that transact the most volume across three of its options exchanges. I ask, again, in what other industry would a company be prohibited from lowering prices for the most value and value contributing investors.”

As for the value of exchanges versus dark pools, Wittman said: “If you take a look at high volatility times like August 24, you saw that the amount of off-exchange trading almost was cut in half as flow moved to the lit venues which underscores the importance of the lit venues in capital formation.”

The Dow Jones Industrial Average plunged by 1,089 points in the opening minutes of trading on August 24. (See related article below.) Finger-pointing and hostility have grown among competing factions since that day. 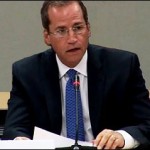 “Morgan Stanley’s philosophy around its dark pools has always been to leverage technology to enhance our role as a broker in seeking best execution for our clients. Morgan Stanley has never sought to compete directly with exchanges with regards to overall volume traded in any of its dark pools. This approach contrasts with the approach taken by some of the other dark pool operators under Reg ATS.”

Then there was a swipe at the SEC by Silverman:

“The current lack of clarity around the liquidity provider has also led to a contentious atmosphere in this marketplace. Given little guidance, today’s de facto market makers are left to carve out their own advantages often in the form of co-location and fast market data feeds among other things which we all know soon became a very important profit center for exchanges.”

Next from Silverman came what sounds like a push by Wall Street mega firms to gut exchanges of their regulatory role. Silverman testified:

“A negative side of fierce competition between exchanges is that the drive to increase profits conflicts with the idea of being an SRO [Self Regulatory Organization] and fulfilling the utility function that was originally envisioned by Congress. Specifically, are for profit exchanges best positioned to drive market structure changes as if they are an unbiased participant acting solely in the public interest?”

Sal Arnuk and Joe Saluzzi, co-founders of Themis Trading and authors of Broken Markets, sent a letter to the SEC on May 13, 2015 in response to a request for public comment on market structure issues. (Arnuk and Saluzzi were praised for their work in the Michael Lewis book, as was Eric Hunsader, a trading data guru who has connected many of the missing dots of the rigged market structure.)

“Participants in our US markets deal with a technological arms race, conflicts of interest, fleeting liquidity in times of stress, and an ever increasing amount of trading taking place in a vast network of opaque darkness. The public markets are considered ‘toxic’ by varied participants. Studies point out that institutional bids and offers result in too much price movement. High frequency market makers lament that the orders sent to the exchange, outside their own, tend to be orders that have been ‘exhausted’ everywhere else. Is this a desirable outcome of modern market structure? Did the Commission envision this when it crafted Reg NMS?”

Did Small Investors Get Fleeced in the 1089-Point Plunge on August 24?

Lawsuit Stunner: Half of Futures Trades in Chicago Are Illegal Wash Trades