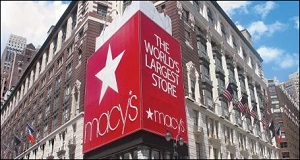 The quirky U.S. consumer has apparently decided to load up on building supplies, eat and drink at restaurants, forego filling the refrigerator, and snub Macy’s. The Commerce Department reported this morning that retail sales edged up 0.6 percent in July with food services and drinking places growing at 0.7 percent; building materials and garden supply dealers ratcheting 0.7 percent; while grocery store sales were flat and clothing and clothing accessories stores edged up just 0.4 percent. Department store sales were negative at -0.8.

Yesterday, Macy’s reported that its second quarter earnings came in at 64 cents per share, a sharp drop from the 80 cents per share it earned in the second quarter of 2014. Revenue was also off, declining to $6.1 billion from $6.27 billion year over year. Macy’s stock dropped 5.06 percent by the close of trading yesterday, despite a late-day rebound in the overall stock market that erased an earlier loss of 277 points.

Retail sales for June were revised to flat from the earlier estimate of a drop of 0.3 percent.

This morning’s retail sales data, released at 8:30 a.m., one hour before the stock market opened, was being heavily watched as a barometer of whether the Federal Reserve would be able to make the case that the economy was performing well enough for a rate hike in September. The Fed has not lifted its zero bound range for rates since it was set in December 2008 – a torturous 7 years for retirees attempting to live on fixed income investments like U.S. Treasury notes and bonds which have seen their yields cut by 50 percent or more.

Consumer spending accounts for approximately 70 percent of the U.S. economy and the monthly retail sales number is closely watched by the Fed as a monetary policy guide.

The Fed finds itself in a dangerous quandary: no ability to cut rates to stimulate the economy if growth starts to tank again because the Fed is already at the zero bound range; while conversely running the risk of setting off a global financial asset selloff that destabilizes markets further if it raises rates.