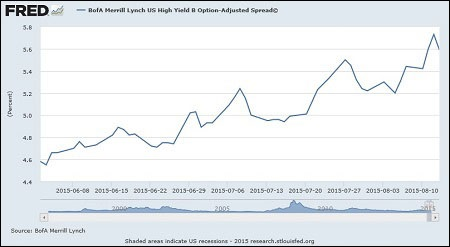 After overnight chaos in emerging market currencies, which are still reeling from China’s devaluation of its Yuan, the New York Fed further rattled markets at 8:30 a.m. this morning with a stunning manufacturing report showing that business conditions in New York fell off a cliff in its latest survey. The New York Fed writes:

“The August 2015 Empire State Manufacturing Survey indicates that business activity declined for New York manufacturers. The headline general business conditions index tumbled nineteen points to -14.9, its lowest level since 2009. The new orders and shipments indexes also fell sharply, to -15.7 and -13.8 respectively, pointing to a marked decline in both orders and shipments. The inventories index dropped to -17.3, signaling that inventory levels were lower.”

Adding to market angst this morning, the U.S. benchmark crude oil, West Texas Intermediate, was trading below $42 a barrel, raising renewed concerns that the Federal Reserve’s prediction that the collapse in energy prices would be transitory was little more than wishful thinking.

But the biggest cautionary warnings – rising junk bond yields and the rising spread in yields between junk and U.S. Treasuries – are commanding far less attention than they should be. Widening credit spreads served as an early red flag to the 2008 financial crash and implosion of iconic Wall Street firms.

As of last Wednesday, a Bank of America Merrill Lynch index showed yields on U.S. energy junk bonds reaching 11.8 percent. Even the yields on investment grade corporate debt are rising, while some distressed energy debt is yielding 30 to 40 percent.

Last Thursday, Thomson Reuters’ Lipper service reported that U.S. based high-yield (junk) bond funds and U.S. based investment-grade bond funds posted their third straight week of outflows of investor cash. Where the money went is also revealing, with $6 billion of inflows last week into U.S. based money market funds, which are typically perceived as a short-term, liquid parking place when market uncertainty reigns.

Back on May 22, 2013, in remarks to the Joint Economic Committee of Congress, then Fed Chairman Ben Bernanke referred to the risks building up in higher risk bond markets. Bernanke explained:

“…the Committee is aware that a long period of low interest rates has costs and risks. For example, even as low interest rates have helped create jobs and supported the prices of homes and other assets, savers who rely on interest income from savings accounts or government bonds are receiving very low returns. Another cost, one that we take very seriously, is the possibility that very low interest rates, if maintained too long, could undermine financial stability. For example, investors or portfolio managers dissatisfied with low returns may ‘reach for yield’ by taking on more credit risk, duration risk, or leverage. The Federal Reserve is working to address financial stability concerns through increased monitoring, a more systemic approach to supervising financial firms, and the ongoing implementation of reforms to make the financial system more resilient.”

It’s more than two years since Bernanke made this statement and the “reach for yield by taking on more credit risk, duration risk” and mountains of leverage has skyrocketed out of control on Wall Street without the Federal Reserve or any other Federal regulator or Congress reigning it in. The proverbial punch bowl is once again overflowing without restraint by the watchdogs of the public trust while the Wall Street minions continue to dance with abandon.

The historic collapse in commodity prices, the currency wars, China’s devaluation (which is now forcing other Asian currencies lower in order to compete in export markets), global central banks still trying to resuscitate their economies seven long years after the Wall Street collapse, all point to history books looking back on this era as an epic failure of government policy designed under corporate dictate rather than public interest.

Were it not so tragic, one could almost laugh at this insightful sentence by Financial Times journalist, Henny Sender, this morning: “Somehow it does not feel as if the US economy is in strong recovery mode, despite all the positive indicators: the increasing likelihood that the Federal Reserve will raise interest rates, the resurgent dollar, and falling unemployment.”

The reality is that it has been the incessant chatter by the Fed about raising interest rates that has created the “insurgent dollar.” That now increasingly appears to have been a gambit to intentionally talk up the dollar to avoid capital flight. As for the falling unemployment data – enough said.