These U.S. States Could See Job Losses from China’s Devaluation 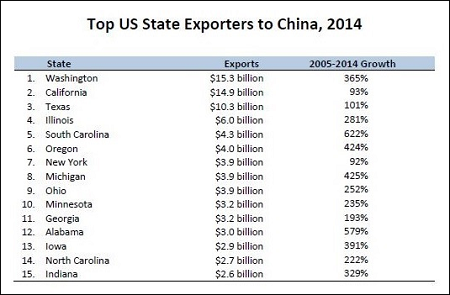 The Standard & Poor’s 500 stock index was down a meager -0.96 percent at the close yesterday on the news of China’s devaluation of its currency, the Yuan, but some noteworthy individual stocks took a more dramatic pounding. Apple lost 5.20 percent; Micron Technology was in the red by 4.99 percent; Yum! Brands closed down 4.87 percent while General Motors lost 3.48 percent. All of these companies rely on China as a major export market.

A slowdown in economic growth in China could also see individual U.S. states licking their wounds as well. The following statistics come from the US-China Business Council:

The chart above shows the U.S. states that could be most dramatically impacted should China’s economic slump worsen. Washington state saw its exports to China grow from $3.3 billion in 2005 to a whopping $15.3 billion in 2014. Washington state’s major exports to China include transportation equipment, forestry products, computers and electronics, primary metal manufacturing, mineral and ores. In the span of one decade, the state’s exports to China grew by 365 percent versus its export growth rate to the rest of the globe of 148 percent.

South Carolina is another state that has experienced an outsized boost from exporting to China. From 2005 through 2014, its exports to China skyrocketed from $590 million to $4.2 billion. One of the popular exports to China is BMW cars and SUVs made at its Greer, South Carolina plant. BMW, a German automaker, last year announced that it would be investing another $1 billion in the Greer plant and add 800 additional workers, boosting total employment at the plant to 8,800 workers. South Carolina is also home to a sprawling Boeing campus in North Charleston where the 787 Dreamliner is made. In 2014, $2.8 billion of South Carolina’s exports to China were in the category of transportation equipment.

As foreign currencies decline in value to the U.S. Dollar, the ability of U.S. exporters to compete against foreign domestic goods priced in the cheaper currency becomes more difficult. An additional and serious risk to the U.S. economy is that these currency wars, which are actually trade wars to sustain or grab market share (think Saudi Arabia and oil) lead to a pricing war race to the bottom with the inevitable outcome of the U.S. importing deflation.

As we reported in January:

“Plunging yields on U.S. Treasury notes and bonds, record low yields on the sovereign debt of countries in the European Union, together with plunging industrial commodity prices, are sending a crystal clear message to stock markets: there is a glut of supply and too little demand from consumers.

“Such a supply-demand imbalance brings about price wars. Thus we have Saudia Arabia slashing prices on oil to its customers in an attempt to grab market share, triggering a global price war in oil; supermarket pricing wars in Britain; gas station pricing wars in the U.S.; mutual fund fee pricing wars; magazine price wars. There is even a chicken nuggets pricing war.”

And we further explained:

“There is a delicate equilibrium of income distribution that sustains growing economies. When income distribution becomes insanely skewed to the top 10 percent, deflation is the inevitable outcome. To express it another way, when workers are stripped of an adequate share of the profits of their productive labors on behalf of the corporation, they can’t consume an adequate amount of the corporate output. Supply gluts develop and deflation follows.”

But don’t expect most members of Congress, whose campaigns are financed by the 1 percent, to open their eyes to the reality of this dangerous and growing problem. Even after the worst economic crash since the Great Depression in 2008, they’re still wearing their blinders.