Keep Your Eye on Junk Bonds: They’re Starting to Behave Like ‘08 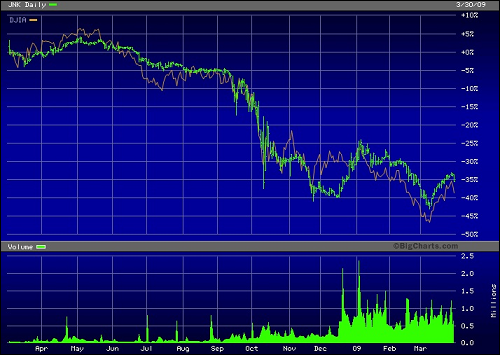 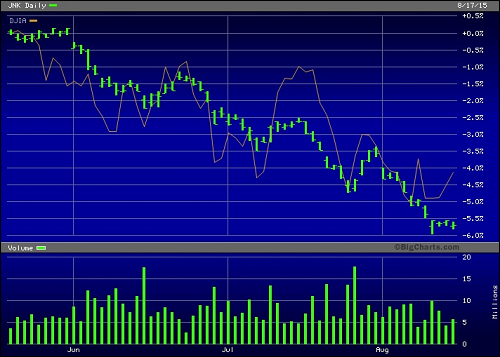 According to data from Bloomberg, corporations have issued a stunning $9.3 trillion in bonds since the beginning of 2009. The major beneficiary of this debt binge has been the stock market rather than investment in modernizing the plant, equipment or new hires to make the company more competitive for the future. Bond proceeds frequently ended up buying back shares or boosting dividends, thus elevating the stock market on the back of heavier debt levels on corporate balance sheets.

Now, with commodity prices resuming their plunge and currency wars spreading, concerns of financial contagion are back in the markets and spreads on corporate bonds versus safer, more liquid instruments like U.S. Treasury notes, are widening in a fashion similar to the warning signs heading into the 2008 crash. The $2.2 trillion junk bond market (high-yield) as well as the investment grade market have seen spreads widen as outflows from Exchange Traded Funds (ETFs) and bond funds pick up steam.

The big fear this time around is who is going to provide the liquidity in the junk bond market if too many investors head for the exits at the same time.

In June, Richard Berner, the Director of the Office of Financial Research (OFR) at the U.S. Treasury Department, addressed an audience at the Brookings Institution on potential threats to stability in the financial markets. Berner specifically called out the corporate bond market, stating:

“Since the crisis, market liquidity has become more fragmented in a few markets, such [as] those for sovereign bonds in emerging markets and U.S. corporate bonds. Signs of bifurcation or fragmentation include the concentration of dealer inventories in high-quality liquid assets, declines in trading turnover relative to market size, declines in the size of average trades, and increased settlement failures. Perhaps more importantly, liquidity appears to have become increasingly brittle, even in the world’s largest bond markets.”

Today, tens of billions of dollars of junk bonds are housed in ETFs, trading on the New York Stock Exchange. This gives the appearance of liquidity since investors can put in buy and sell orders throughout the trading day. But in a market panic, there might not be any buyers for the junk bonds in the giant portfolios, causing prices to plummet.

In its “Monetary Policy Report” submitted to Congress on February 24 of this year, the Federal Reserve also focused attention on the illiquid assets in junk bond ETFs masquerading as liquid paper. The report noted:

“…the growth of bond mutual funds and exchange-traded funds (ETFs) in recent years means that these funds now hold a much higher fraction of the available stock of relatively less liquid assets — such as high-yield corporate debt, bank loans, and international debt — than they did before the financial crisis. As mutual funds and ETFs may appear to offer greater liquidity than the markets in which they transact, their growth heightens the potential for a forced sale in the underlying markets if some event were to trigger large volumes of redemptions.”

In overnight trading, the Shanghai Composite lost 6.2 percent and commodity prices resumed their plunge, signaling stalling global growth. This is not a positive sign for overly indebted corporate balance sheets nor for illiquid junk bonds trading on stock exchanges in the guise of a liquid security.