Sandy Weill, of Citigroup infamy, and his wife, Joan Weill, have given $10 million over the years to Paul Smith’s College, a small campus of 1,000 students situated on a lake and nestled in the breathtaking Adirondack Mountains of upstate New York. The $10 million resulted in Joan Weill’s name being placed on the school’s library and student union. A month ago, in what now looks like a mean-spirited leveraged-buyout to alumni and faculty, Joan Weill offered to pony up another $20 million but only if the school changed its name to become: Joan Weill-Paul Smith’s College.

The name-change requires the involvement of the courts. The 50,000 acres on which the college is located was purchased by the school’s namesake 157 years ago and donated to the college by his son, along with a foundation bequest to build the school. The son’s will required that the college “be forever known as ‘Paul Smith’s College of Arts And Sciences,’ ” a pesky detail to people like the Weills. (Sandy Weill streamrolled the repeal of the depression-era consumer safety legislation known as the Glass-Steagall Act in order to cobble together Citigroup, the biggest banking flop in U.S. history and a major contributor to the financial collapse of Wall Street and the U.S. economy in 2008.)

The proposed name-change has set off a firestorm of anger and disgust among local residents, faculty, current students and particularly among alumni, who call themselves, “Smitties.” A Change.org petition has gone up and garnered over 3,300 signatures and fiery language in the comment section. Facebook is also sporting an “Alumni and Friends Against Changing Paul Smiths College’s Name” page. The local newspaper, the Adirondack Daily Enterprise, has set up a special page for letters to the editor on the subject.

Joan Weill and Paul Smith, the man for whom the school is named, have as much in common as Gucci knockoffs and a handmade quilt. Apollas (“Paul”) Smith purchased the 50,000 acres on which the college is located in 1858. The next year, he and his wife, Lydia, built the renowned Paul Smith’s Hotel next to the beautiful Lower St. Regis Lake. The hotel became a favorite of wilderness buffs and U.S. Presidents, including Calvin Coolidge.

When Paul Smith died in 1912, his son, Phelps, continued running the hotel until it was destroyed by fire in 1930.  When the unmarried Phelps Smith died in 1937, he left the bulk of the estate, $2,500,000, for the express purpose of building Paul Smith’s college to honor his father’s name by bringing higher education to the local area. In today’s dollars, that $2.5 million would be $42.3 million, far in excess of what the Weills have donated to the school.

Cousins of Phelps Smith challenged the will in court at the time of his death and the court’s decision in 1938 could provide the basis for challenging the name change today. Acting Surrogate Ellsworth N. Lawrence wrote: “…charitable purpose dominates the whole will” and “He [Phelps Smith] did not intend that any substantial part of his estate should go to his heirs. And, having no near relatives, he very laudably desired not only to perpetuate his father’s name, but to bring the advantages of higher education within the reach of those young people who might not otherwise have it.”

In a press release issued on July 16 announcing the proposed name change, E. Philip Saunders, Chairman of the Board at the College, said this: “Our Board of Trustees thinks it only fitting that the names of the two most important families in the history of the college — the Smiths and the Weills — should be forever linked to the school and the region they love.”

In reality, the Smiths were attached to the region and the land on which the school was built beginning in 1858. The Smiths provided employment opportunities in the region in both the hotel, a railroad and utilities company for eight decades until the son’s death in 1937. The $2.5 million gift then provided more jobs on campus once the college opened to its first class in 1946.

What attachment do the Weills have with this Adirondack region? In 1990, they bought the nearby Green Bay Camp as a vacation residence, made lavish renovations including an indoor lap lane swimming pool and conducted themselves in a “demanding” fashion according to reporters who have written about the matter.

In making the announcement for the proposed name change, the college notes that “[Joan] Weill has been one of the most influential volunteer leaders in the college’s 80-year history, serving on the Board of Trustees for 19 years, including five as chair (2005-2010). As a board member, she spearheaded the conversion of Paul Smith’s to a four-year institution, the only such institution in New York’s Adirondack Park. She is an emeritus trustee today and remains active in college fundraising.”

Alumni see the matter far differently. In a joint letter at the Change.org petition site, alumni write: “Many have not paused to ask themselves why our community is now drawing our line in the sand. Well, we are embarrassed on behalf of our alma mater.”

Commenters have peppered the site with the words “arrogance,” “outsized ego” and “hubris.” Thomas O’Connor of Fredericksburg, Virginia wrote: “I was proud to tell others that I went to Paul Smith’s College for Forestry. They were impressed! I am not going to anyone now that I went to Joan Weill College! They will not be impressed by her name or her money. In fact it leaves a bad taste in my mouth. Sadly, with all the bad press and bad word of mouth, you might as well shut the school down now.”

David Shoen of Jamestown, New York and the Class of 1985 wrote:

“I believe that no name should come before or after Paul Smith. Decades of good stewardship have etched the name Paul Smith’s College into the lexicon of Forestry the world over. Only a very special person could ever have his name on our college; that special person has not come forward. The college deserves its place in history, that place is being earned every day by students and alumni. The good stewardship and the ethics practiced by Smittys foresters is being ruined by knotting us with CITICORP and its ill-gotten gains. Donations are admirable; buying a college that is vulnerable is disgraceful.” 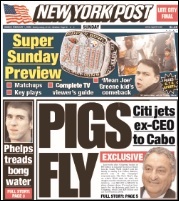 The Weills have an uncanny penchant for scandal. Time Magazine named Sandy Weill one of the “25 People to Blame for the Financial Crisis,” the greatest economic collapse since the Great Depression. On February 1, 2009, Sandy Weill landed on the front cover of the New York Post under the tag line “Pigs Fly.” The ruckus was over Weill flying himself and Joan and other family members to a posh Mexican vacation resort on a Citigroup corporate jet at the same time the insolvent Citigroup had sopped up $45 billion in a taxpayer bailout and was set to receive $300 billion more in asset guarantees. What the New York Post did not know at the time was that the New York Fed was secretly funneling what would end up as a cumulative $2.513 trillion, according to the Government Accountability Office (GAO), in below-market rate loans to resuscitate the collapsing carcass of the Frankenbank created by Weill. While Citigroup was charging struggling consumers rates as high as 17 percent, it was borrowing from the taxpayer at a fraction of one percent.

The New York Post’s outrage was that Weill had already stepped down as both CEO and Chairman of the Board of Citigroup but was being allowed to still use the corporate jet for personal travel. The Post reported: “In addition to use of the plane, Weill has been receiving roughly $3 million in perks from Citigroup since he retired – including consulting fees, health insurance, pension, tax compensation, rental costs for his swanky Midtown office and use of company cars.”

Sandy Weill caused a scandal with another donation to a school – the 92nd Street Y in New York City, a highly sought after preschool for the toddlers of Manhattan’s well-heeled. During Sandy Weill’s tenure, Citigroup employed a research analyst, Jack Grubman, who pumped out buy ratings on stocks to the public while admitting in internal emails that the stocks were dogs. Grubman was charged by the SEC, paid $15 million and was banned from the securities industry for life.  Grubman’s severance was a cool $32 million.  Sandy Weill and the 92nd Street Y were mentioned by name in the SEC enforcement action:

“In late November 1999, Grubman upgraded AT&T Corporation from a Neutral– his longtime rating on the stock – to a Buy. SSB and Grubman did not disclose in the report that Grubman had a conflict of interest relating to his evaluation of AT&T or that his objectivity had been compromised. Prior to the upgrade, Sanford I. Weill, the co-CEO and Chairman of Citigroup (and a member of the AT&T board of directors), had asked Grubman to take a ‘fresh look’ at AT&T. Thereafter, during the time that Grubman was conducting his ‘fresh look’ at the company, Grubman had asked Weill for assistance in gaining admission for his children to the selective 92nd Street Y preschool in New York City. After Grubman upgraded AT&T and his children had been admitted to the preschool, Grubman stated privately that he had upgraded AT&T to help his children get into the 92nd Street Y preschool.”

The Citigroup Foundation admitted that it had donated $1 million to the 92nd Street Y, but denied that it was tied to getting Jack Grubman’s children admitted.

Joan Weill created her own scandal on Wall Street back in the early 1990s. The SEC charged that Joan Weill’s psychiatrist, Robert H. Willis, had traded on inside information he had gleaned from her about her husband’s activities on Wall Street.

According to the Associated Press, “Dr. Willis admitted he traded in stock of the BankAmerica Corporation in January and February 1986 after he learned from a patient, Joan Weill, that her husband, Sanford I. Weill, the former chief executive of Shearson Loeb Rhoades, was trying to become chairman of BankAmerica.” (Weill never became Chairman of BankAmerica.)

The SEC also charged that Dr. Willis had traded on “non-public information in 1981 when Mrs. Weill confided in him about the anticipated merger of Shearson and American Express. At the time, her husband was chief executive of Shearson.” That merger did happen. Joan Weill was not charged in either insider trading matter.

The Paul Smith’s College name-change went before Judge John Ellis in a New York State court yesterday. According to Reuters, the Judge did not make any decision and it is not clear when a decision might come down.

One would think that a family with the baggage of the Weills would not court further scandal. Instead of withdrawing from the name-change proposal after the New York Times reported on the matter yesterday, the Weills are now watching the uproar spread to CNN, Reuters, public radio and the Chronicle of Philanthropy.

One has to wonder exactly what the longer range plans are for this small college that are worth this kind of withering publicity to the Weills.