The Perfect Storm: Greece and the Euro in Crisis and Chinese Stocks Crumbling 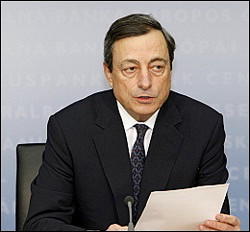 “And so we view this, and I do not think we are unbiased observers, we think the euro is irreversible. And it’s not an empty word now, because I preceded saying exactly what actions have been made, are being made to make it irreversible. But there is another message I want to tell you. Within our mandate, the ECB is ready to do whatever it takes to preserve the euro. And believe me, it will be enough.”

There’s no question about the critical need for financial help in Greece. It’s GDP has fallen by 25 percent over the past five years; its unemployment is over 25 percent with youth unemployment near 50 percent. And to onlookers around the world watching the cash rationing scenes at the banks in Greece unfold on television, it looks like Draghi’s promise is an empty one.

The situation is so dire that even Pope Francis has asked Catholics worldwide to pray for the Greek people.  A man in Britain has raised over 1.4 million Euros to help Greece from more than 82,000 people on the crowd funding web site, Indiegogo.

The July 4 print edition of The Economist sums up the past week in Greece this way:

“…barred banks, capital controls, the first IMF default by a developed country, the collapse of a multi-billion-euro bail-out, plans for a referendum that may hasten Greece’s ejection from the single currency, and the beggary of the people.”

All that and still Draghi seems to be missing in action.

Ambrose Evans-Pritchard, writing in the U.K.’s Telegraph newspaper was particularly harsh in his assessment of the European Central Bank, writing that “Europe has suffered a reputational catastrophe” in Greece. Evans-Pritchard adds:

“It is an odd spectacle to watch a central bank with a treaty duty to uphold financial stability take the deliberate decision to precipitate the collapse of banks that it regulates. But the deeper point is that the insane construction of the euro — a naked currency union without fiscal and political foundations — must inevitably tend to authoritarian monetary dystopia in the end.”

If Draghi is reading this, we hope he catches that final phrase: “authoritarian monetary dystopia.”

To grasp the full impact of Draghi’s folly in letting the negotiations get to this crisis stage, consider exactly where Greece is located. Greece forms the south-eastern point of the continent and is a major seaport. That makes it a national security asset to Europe. Imagine the United States getting in a row with Florida, our south-eastern flank surrounded by the Atlantic Ocean and the Gulf of Mexico and effectively telling it to take a hike over funding issues.

As all of this is playing out in Greece, less attention is being paid to the stock market situation in China which has the potential to be a replay of the stock market crash which occurred in the U.S. in 1929.

Last night, the Shanghai Composite broke a key technical support level, closing below 4,000 at 3,912.77. The index is now down 24 percent since it peaked earlier this month and has wiped out more than $2.4 trillion in value. China’s stock market is the second largest in the world in terms of market capitalization, with the U.S. ranking number one.

Making world markets even more worried about the situation in China, its regulators are showing a similar brand of leadership as Mario Draghi. After previously pledging to trim back risky margin lending, they have now done a complete flip flop and are permitting individual brokerage firms to avoid selling out accounts that miss margin calls by setting their own guidelines on the amount of collateral needed.

Sounding reminiscent of the sub-prime securitization fiasco on Wall Street leading to the 2008 crash, Bloomberg Business reports the following this morning:

“Hours after Wednesday’s tumble of 5.2 percent in the Shanghai Composite, the securities regulator eased collateral requirements for leveraged investors and allowed brokerages to securitize margin loans — a move that frees up room to extend credit.”

Adding to the regulatory lunacy in China, the Financial Times is reporting today that “In another effort to buoy the market the securities regulator issued rules expanding finance options for securities brokerages. A pilot project that allowed 20 large brokerages to sell bonds on the stock exchange will be expanded to the entire industry.”

This is, effectively, just another form of securitizing margin loans. Exactly what investor would want to buy the bonds of brokerage firms in China when the market is in a meltdown remains to be seen.