Thanks to Wall Street, America Has Growing Greek-Like Debt Bombs 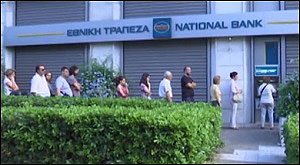 Greece has two things in common with bankrupt or teetering parts of the United States: it took advice and money from Wall Street while paying huge fees; now the catastrophic results of that bad advice is falling on the backs of the poor and most vulnerable citizens. In fact, we’re all Greeks now.

From the $1.2 trillion in student debt now on the backs of U.S. college students, a growing number of whom are turning to prostitution to keep up, to teetering Puerto Rico, the bankruptcy of Jefferson County, Alabama in 2011, Detroit’s bankruptcy in 2013, Wall Street was on hand to grease the skids or set the train wreck in motion.

As Greece pensioners line up outside of banks today to receive a fraction of their monthly pension, Puerto Rico has acknowledged it can’t pay its $72 billion in debt and has imposed a stunning 11.5 percent sales tax on its struggling citizens.

How did Puerto Rico, with a tiny population of just 3.6 million, get itself into such astronomical debt? In October 2013, the Wall Street Journal’s Michael Corkery and Mike Cherney reported that Wall Street banks, led by Citigroup and UBS, since 2006 had sold 87 Puerto Rico debt deals totaling $61 billion. For burying Puerto Rico under debt, the reporters note that Wall Street, its lawyers and related parties received $1.4 billion in fees.

And, of course, there were those wonderful swap deals along the lines of those Goldman Sachs sold to Greece and JPMorgan sold to Jefferson County, Alabama. Corkery and Cherney report that Puerto Rico paid “$690 million to Wall Street firms to cancel derivative contracts” that apparently had gone sour as had the ones in Greece.

Then there was the issuance of interest-bearing bonds by Puerto Rico to pay off the interest on other bonds. According to the reporters, in August 2013 Morgan Stanley led an underwriting on $673 million in bonds but “at least $110 million of the debt will be used for ‘capitalized interest,’ according to the bond offering documents. That amounts to raising money from bondholders and then using the proceeds to make interest payments back to those same bondholders. It will also result in larger debt payments down the road.”

If a retail stock broker attempted to bury his client under margin debt or allowed the client to commit financial suicide in the market, the broker would be on the wrong side of the law. A long line of arbitration cases and Security and Exchange Commission rulings mandate that a registered representative must guide the client on a course of suitable investing. But apparently, burying counties, cities, countries, and U.S. territories under debt has no legal barriers on Wall Street. One has to get caught bribing someone to get charged by a regulator.

Back on November 4, 2009, JPMorgan’s trading unit, JPMorgan Securities was charged with the following two years before Jefferson County, Alabama filed for bankruptcy:

“The SEC alleges that J.P. Morgan Securities and former managing directors Charles LeCroy and Douglas MacFaddin made more than $8 million in undisclosed payments to close friends of certain Jefferson County commissioners. The friends owned or worked at local broker-dealer firms that performed no known services on the transactions. In connection with the payments, the county commissioners voted to select J.P. Morgan Securities as managing underwriter of the bond offerings and its affiliated bank as swap provider for the transactions.”

The SEC notes that the payments were secret but JPMorgan “passed on the cost of the unlawful payments by charging the county higher interest rates on the swap transactions.”

Glenn S. Gordon, the Associate Director of the SEC’s Miami Regional Office, had this to say at the time: “This self-serving strategy of paying hefty secret fees to local firms with ties to county commissioners assured J.P. Morgan Securities the largest municipal auction rate securities and swap agreement transactions in its history.”

Jefferson County emerged from bankruptcy on December 3, 2013 but sewer ratepayers will be feeling the pain of the county’s debt binge for decades to come. According to a 2013 report by Bloomberg News, sewer rates are projected to rise by “7.9 percent each year for four years, starting in 2014, and by almost 3.5 percent annually through 2053.” The report notes further that the “sewer rate increases will disproportionately affect the poor. Seventy percent of the sewer system’s users reside in the commission districts with poorest residents.”

What we already know about these derivative debt bombs is indeed unsettling. What is far more dangerous, however, is what we don’t know. Many deals were written in secret and have confidentiality clauses.