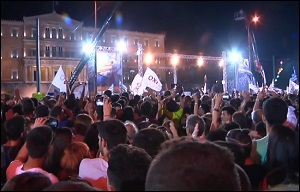 The fallout from yesterday’s Greek referendum is now spilling over into the share prices of global banking stocks in morning trading, with some down as much as 7 to 5 percent, raising the specter that if Germany doesn’t soon focus on the bigger financial stability picture, it could create more bailouts in short order.

The rumored close vote by the Greek people in a referendum yesterday turned into a landslide 61 percent vote against the tough austerity measures being offered by the European Commission, the European Central Bank and the International Monetary Fund in exchange for continued loans to the struggling country.

News reports since the vote indicate that German Chancellor Angela Merkel and Wolfgang Schäuble, the German Finance Minister, have no plans to quickly cave in to Greek demands for a more generous deal than the one offered prior to the referendum. Yanis Varoufakis, Greece’s Finance Minister, resigned this morning in hopes of allowing friendlier negotiations to proceed. The outspoken Varoufakis has called the Sunday vote an historic moment in time “when a small European nation rose up against debt-bondage.” Schäuble is in no mood to hear phrases coming out of Greece like “debt bondage.”

Merkel is scheduled to meet today with French President Francois Hollande, followed by a full conference among Eurozone leaders tomorrow.

Italian bank stocks were leading decliners with Banca Monte dei Paschi di Siena declining more than 7 percent at one point this morning with Banca Popolare di Milano losing as much as 5 percent in morning trading. Even Germany’s Deutsche Bank was off by as much as 2.65 percent.

Within the first 15 minutes of trading on the New York Stock Exchange this morning, shares of Citigroup, Goldman Sachs and Bank of America were all down by 1 percent or more. A continued global flight to safety brought the yield on the 10-year U.S. Treasury Note down to 2.29 percent.

Equally worrisome for financial stability in the Eurozone, sovereign bond yields in Italy, Spain and Portugal were climbing this morning in early trade over fears that their already fragile financial situation may take a turn for the worse with the Greek situation causing a flight to safety into the bonds of financially stronger countries.

Following the referendum vote, New York Times’ columnist, Paul Krugman, who has long railed against austerity as a viable means of restoring growth to a country, was particularly harsh in his assessment of creditors’ demands, writing:

“…the campaign of bullying — the attempt to terrify Greeks by cutting off bank financing and threatening general chaos, all with the almost open goal of pushing the current leftist government out of office — was a shameful moment in a Europe that claims to believe in democratic principles. It would have set a terrible precedent if that campaign had succeeded, even if the creditors were making sense.

“What’s more, they weren’t. The truth is that Europe’s self-styled technocrats are like medieval doctors who insisted on bleeding their patients — and when their treatment made the patients sicker, demanded even more bleeding. A ‘yes’ vote in Greece would have condemned the country to years more of suffering under policies that haven’t worked and in fact, given the arithmetic, can’t work: austerity probably shrinks the economy faster than it reduces debt, so that all the suffering serves no purpose. The landslide victory of the ‘no’ side offers at least a chance for an escape from this trap.”

We’re firmly in Krugman’s camp. The “bleeding” of Greece through ill-conceived austerity measures has led to its GDP shrinking by 25 percent over the past five years; 25 percent unemployment and approximately 50 percent joblessness among its young people.

Americans should take no comfort in the fact that we’re separated by an ocean from the Eurozone. The turmoil happening there has caused a spike in the U.S. dollar which is making U.S. goods more expensive in foreign markets and thus making U.S. exports less competitive. That is now being translated into lower profits at major U.S. based corporations, forcing a reassessment of whether the U.S. stock market is overpriced based on forward earnings potential.

If U.S. bank stocks catch the contagion from downdrafts in Europe, it could also seriously tie the hands of the Federal Reserve to carry out its planned hike in interest rates. It could also have the potential for the Fed to demand more capital reserves from U.S. banks.

No one should underestimate the ripples coming across the waters from Europe.