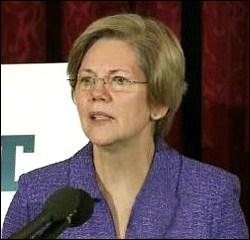 When it comes to sleuthing out how Wall Street has gamed the laws, conned the regulators and colluded to corrupt the whole financial system, there is no one in Congress sharper-eyed or more outspoken than Senator Elizabeth Warren, who is also exceptionally well-qualified to lead this Wall Street posse.

Warren was a commercial law professor at Harvard for more than 20 years. She is widely credited with facilitating the creation of the Consumer Financial Protection Bureau (CFPB) to protect consumers from the insidious rip-offs in mortgages, credit cards, student loans and other financial products.

Warren had this to say when she introduced the legislation, according to the Congressional Record:

“Over the past 7 years, we have made some real progress dialing back the risk of a future crisis. But despite that progress, the biggest banks continue to threaten the economy. The biggest banks are collectively much bigger today than they were 7 years ago. They continue to engage in dangerous, high-risk practices. And with each new headline and subsequent legal settlement, it becomes clearer that they keep chasing profits even if it means breaking the law.

“The big banks weren’t always allowed to take on big risks while enjoying the benefits of taxpayer guarantees. Four years after the 1929 Wall Street crash, Congress passed the Glass-Steagall Act, which is best known for separating investment banks and their risk-taking from commercial banks that manage savings accounts, checking accounts, and offer other banking services.

“The 21st Century Glass-Steagall Act will rebuild the wall between commercial banks and investment banks, separating traditional banks that offer savings and checking accounts and that are insured by the FDIC from their riskier counterparts on Wall Street.”

Those are all goals to be applauded. Unfortunately, the text of the proposed legislation has two fatal flaws. First, banks can take up to five years to implement the new law. Regulators can stall for an additional year, bringing the delay to a total of six years.  As Senator Warren clearly knows, this country will be devastated with staggering national debt, a ravaged middle class, decaying infrastructure, and the highest income and wealth inequality in the industrialized world if Wall Street retains the current structure for another six years.

Congresswoman Marcy Kaptur’s legislation in the House of Representatives to restore the Glass-Steagall Act, which has 63 co-sponsors versus Senator Warren’s four, provides just a two-year window for implementing the law, with a maximum one-year extension at the behest of regulators. That legislation is called the “Return to Prudent Banking Act of 2015.”

“A national banking association may not…(i) invest in a structured or synthetic product, a financial instrument in which a return is calculated based on the value of, or by reference to the performance of, a security, commodity, swap, other asset, or an entity, or any index or basket composed of securities, commodities, swaps, other assets, or entities, other than customarily determined interest rates…”

Interest rate swaps make up the bulk of the tens of trillions of dollars of swaps sitting on the major Wall Street banks’ balance sheets. Under the above language, they could remain and more could be added. That’s a big problem because many of these contracts are secret deals between financial institutions and neither Congress nor the public have any means of ferreting out the credit worthiness of the counter parties or what type of financial contagion might result if these swaps blow up on the books of an insured depository bank.

Kaptur’s Glass-Steagall bill has no such carve-out for interest rate swaps. Senator Warren’s inclusion of this carve-out is particularly hard to understand given the wrath (well-deserved) that she directed at Citigroup when it was able to sneak language into the funding bill in December to defy the language of the Dodd-Frank financial reform legislation and keep these tens of trillions of dollars of swaps on its books and at other major banks.

Restoring the Glass-Steagall Act has now become an issue on the presidential campaign trail. It is likely to grow in importance along with accelerating signs of financial stresses in global financial markets.

Hillary Clinton, whose husband was President when the Glass-Steagall Act was repealed, has no plans to endorse its return according to a statement earlier this month by one of her economic advisors, Alan Blinder. Robert Reich, Labor Secretary under President Clinton, recently lectured Hillary in an opinion piece in Newsweek on why this is a serious mistake on her part. Reich wrote:

“…in 1999, President Bill Clinton struck a deal with Republican Senator Phil Gramm to do exactly what Wall Street wanted, and repeal Glass-Steagall altogether.

“What happened next? An almost exact replay of the Roaring ’20s. Once again, banks originated fraudulent loans and sold them to their customers in the form of securities. Once again, there was a huge conflict of interest that finally resulted in a banking crisis.

“This time, the banks were bailed out, but millions of Americans lost their savings, their jobs, even their homes.”

At least two other Democratic candidates for President, Senator Bernie Sanders and former Maryland Governor Martin O’Malley, are advocating for the restoration of the Glass-Steagall Act. Hopefully, Americans will be wise enough this time around to choose a candidate who wants what’s best for the country, not what’s best for Wall Street.