Yesterday, domestic oil (West Texas Intermediate or WTI) dipped below $50 a barrel during intraday trading, reaching a level not seen since April. Gold closed at the lowest price in five years while sugar traded at a six year low. Wheat has lost almost 9 percent since last week. The Bloomberg Commodities Index traded at a 13-year low yesterday.

The selloff in commodity prices is sending the following market messages: China is highly likely overestimating its economic growth rate of 7 percent that it reported last week; despite six years of central banks’ efforts to rev up economic engines, the money isn’t reaching consumers – it’s still flowing to the one percent.

The chart below showing the relapse in commodity prices and stock prices in 1937, after the Fed thought it had beaten the worst of the Great Depression, should send an important warning message to today’s Fed. 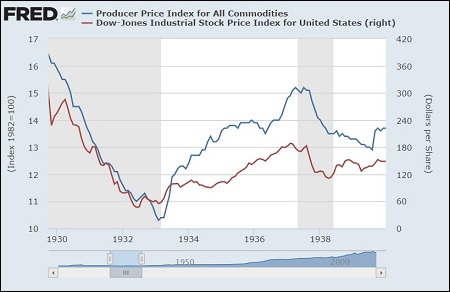