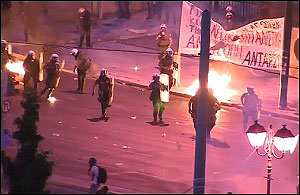 Police Were Under Attack by Protesters Hurling Fire Bombs in Athens Ahead of the Vote on Austerity Measures, July 15, 2015

Protesters were throwing fire bombs in the streets of Athens last evening over harsh new austerity measures being imposed on Greece, where banks and the stock market remain shuttered. One third of the stocks on the Chinese stock market remain suspended from trading in an effort to avert a crash. Bloomberg Business is reporting that institutional investors are holding the highest levels of cash since shortly after the Lehman Brothers collapse in 2008. And just yesterday, America’s largest export market, Canada, slashed interest rates as its central bank announced its economy had contracted in the first two quarters of this year.

The global landscape is beginning to look like the inevitable dystopian reality of a world ruled by the 1 percent.

Against this backdrop, Federal Reserve Chair Janet Yellen, with her incessant chatter about raising interest rates before the year is out to dampen the potential for an overheating economy in the U.S., is increasingly sounding like the weatherman who is forecasting sunshine and clear skies without bothering to pull back the drapes to see gale force winds, a torrential downpour and rowboats in the streets.

Along with the announcement yesterday by the central bank of Canada that it was slashing its interest rate to 0.50 percent, it released a report acknowledging that “Real GDP in Canada is now estimated to have contracted modestly in the first half of 2015, resulting in a marked increase in excess capacity and additional downward pressure on inflation. A significant part of the weakness is related to the oil price shock, although non-energy goods exports fell as well.”

The Bank of Canada said its economy shrank by -0.6 percent in the first quarter of 2015 and by -0.5 in the second quarter. It has also lowered its projected growth rate for the full year to “just over 1 percent” and “about 2 ½ percent in 2016.” The U.S. has not been able to climb out of the 2 percent growth range for the past five years as a hangover from the financial collapse in 2008.

The Bank of Canada’s “Monetary Policy Report” for July 2015 placed part of the blame for Canada’s slowdown on the U.S., writing: “While some of the export weakness can be explained by the temporary pause in U.S. activity earlier this year and a drop in production in response to low prices for non-energy commodities, the extent of the weakness is puzzling.”

In fact, there was a dramatic slowdown in U.S. purchases of imports from Canada in the first five months of this year, according to U.S. data. Last year, the U.S. imported $346.1 billion in goods from Canada. Through May of this year, we are on track to import just $295.68 billion on an annual basis or a decline of 14.6 percent. The falloff in imports from Canada, on a year over year basis, has occurred every month this year and accelerated from March through May, the last month for which the data is available.

What is particularly curious about the sharp falloff in U.S. purchases from Canada is that the Canadian Dollar, known as the Loonie (there’s a Loon on its Dollar coin) has depreciated by over 10 percent against the U.S. Dollar since the start of the year. That should be making Canadian imports more attractive as they become cheaper with the enhanced buying power of the U.S. Dollar.

Part of the falloff may be the result of a retrenching consumer. On Tuesday, the Commerce Department reported that U.S. retail sales declined by 0.3 percent in June, the weakest number since February, while May was revised downward to 1.0 percent.

The Canadian central bank is holding out hope that its economic growth prospects will pick up along with an improved economic situation in the U.S. Its report said “Overall, as U.S. demand growth becomes more durable and non-energy exports regain momentum, business confidence will likely strengthen and the natural sequence will reassert itself.”

Since the Wall Street induced financial crash in 2008, unfortunately, the “natural sequence” has been tepid U.S. growth in the range of 2 percent with periodic quarters of contraction. That tide continues to lift a lot of boats on Wall Street, but around the U.S. and around the globe we are witnessing sinking and leaky boats. Also, the much celebrated improvement in the U.S. unemployment rate, officially now at 5.3 percent, has serious doubters.

In February, Jim Clifton, Chairman and CEO of Gallup, the polling organization, penned a statement on the company’s web site calling the official U.S. unemployment rate “The Big Lie.” Clifton explained the core problems with the number, at that time 5.6 percent:

There is a growing feeling as we look at debt strapped Detroit, Puerto Rico, Greece and China, that the debt liquidation cycle that should have played out after the 2008 crash, was artificially preempted by central bankers in the U.S. and around the world flooding the markets with liquidity and postponing the day of reckoning. The Fed’s balance sheet has ballooned from $800 billion in 2008 to $4.471 trillion as of April of this year.

“While China’s economic expansion beat analysts’ forecasts in the second quarter, the country’s debt levels increased at an even faster pace. Outstanding loans for companies and households stood at a record 207 percent of gross domestic product at the end of June, up from 125 percent in 2008, data compiled by Bloomberg show.”

At some point in the not so distant future, Yellen is going to have to walk back her rate hike talk. Expect to hear a lot of finger-pointing at Greece, China, the Eurozone and Canada and none at Wall Street, the casino that broke the banks in 2008.