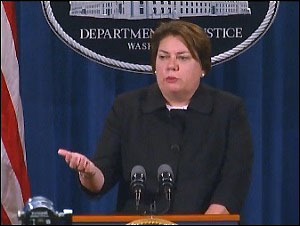 When the U.S. Department of Justice held its press conference on Wednesday to announce that five mega banks were each pleading guilty to a felony charge, paying big fines and being put on probation for three years, Assistant U.S. Attorney General Leslie Caldwell specifically took a battering ram to the reputation of Swiss bank, UBS.

Four banks — Citicorp, a unit of Citigroup, JPMorgan Chase & Co., Royal Bank of Scotland and Barclays — pleaded guilty to an antitrust charge of conspiring to rig foreign currency trading while UBS pleaded guilty to one count of wire fraud for its earlier involvement in rigging the interest rate benchmark, Libor.

In explaining why the Justice Department was ripping up the non-prosecution agreement it had negotiated with UBS in December 2012 over its involvement in the Libor fraud and now charging it with a felony, Caldwell delivered a scathing attack on UBS, stating:

“Perhaps most significantly, UBS has a ‘rap sheet’ that cannot be ignored. Within the past six years, the department has resolved criminal investigations of UBS three times, resulting in non-prosecution or deferred prosecution agreements. UBS also has entered into civil and regulatory settlements on multiple occasions within the past few years.  Enough is enough.”

Enough is apparently not enough, however, when it comes to serial banking tyrants based in the U.S. Not only does Citigroup have a monster rap sheet that keeps growing, but it’s the bank that contributed significantly to the U.S. financial collapse in 2008 and received the largest taxpayer bailout in U.S. history: $45 billion in equity infusions, over $300 billion in asset guarantees, and over $2 trillion in low-cost loans from the Federal Reserve.

In last month’s Harper’s Magazine, Andrew Cockburn took an in-depth look at Citigroup’s history of hubris, including the crime supermarket that Sandy Weill created with the merger of Travelers Group and Citicorp to form Citigroup in 1998. Cockburn writes:

“Under Weill, however, the merged firm set new records for reckless gambles and fraud. It was Citigroup that helped to cook Enron’s books, disguising $4 billion worth of loans on the balance sheet as operating cash flow. Citigroup’s executives apparently understood what they were doing, but carried on regardless—the payoff being the $200 million in fees earned from the energy-trading firm before it collapsed amid bankruptcy and criminal charges. (As it turned out, crime did not pay, at least not for Citigroup’s stockholders, since the firm ended up shelling out $100 million in civil penalties to the SEC and $3.7 billion to settle claims by Enron investors.)

“Equally favored as a client was the WorldCom communications conglomerate. Jack Grubman, Citi’s star telecom analyst, served as an adviser to Bernard Ebbers, WorldCom’s CEO, while relentlessly touting the company’s stock to unwitting investors. For his services, Grubman received more than $67.5 million between 1999 and 2002—hardly excessive compensation, considering that he had helped Citigroup to generate almost $1.2 billion in fees from WorldCom and other communications firms. Subsequent events followed their normal course.  WorldCom declared bankruptcy, Ebbers went to jail, Grubman paid a $15 million fine and was banned from the securities industry for life, and Citigroup settled a  WorldCom investors’ suit for $2.6 billion and paid a $300 million fine to the SEC. None of Citigroup’s senior executives suffered any penalty.”

There is an exponentially growing body of evidence that Citigroup’s cozy ties to Washington and cozy deals with its regulators are enabling its continued plundering of Main Street. In 2011, nineteen professors and scholars in securities law filed a joint amicus brief with the Second Circuit Appeals Court explaining why Judge Jed Rakoff was correct to reject a $285 million settlement that the SEC had negotiated with Citigroup. Their law schools included Columbia, George Washington, Villanova, Cornell and others. They told the court:

“…the SEC’s complaint, if true, means that Citigroup engaged in serious and intentional fraud in disregard of the interests of its customers and for its own substantial gain. Yet, although the first sentence of paragraph one of the complaint labels this a ‘securities fraud action,’ the complaint charges Citigroup only with negligence…the prophylactic measures imposed for three years are relatively inexpensive measures that appear to be ‘window-dressing’…the penalties are modest, given the gravity of allegations, the investors’ losses, the harm to the public and the fact that Citigroup is a recidivist.”

“Many big banks are well represented in Washington but the connection between Citigroup and Democratic administrations really sticks out. Three of the last four Democratic Treasury Secretaries have Citigroup ties; the fourth was offered but turned down the CEO position at Citigroup. Former Directors of the National Economic Council and the Office of Management and Budget at the White House and our current U.S. Trade Representative also have Citigroup ties. You once served as President of Citigroup International and are now in line to be number two at the Federal Reserve…

And there’s one more thing this kind of political cronyism allows: it allows a bank like Citigroup to survive on the backs of taxpayers in the biggest bailout in history in 2008 and then continue to run up a rap sheet like the following without seeing one executive go to jail or the banking tyrant being ordered to be broken up by regulators.

A Sampling of Citigroup’s Rap Sheet Since 2008:

May 20, 2015: Citicorp, a unit of Citigroup becomes an admitted felon by pleading guilty to a felony charge in the matter of rigging foreign currency trading, paying a fine of $925 million to the Justice Department and $342 million to the Federal Reserve for a total of $1.267 billion.