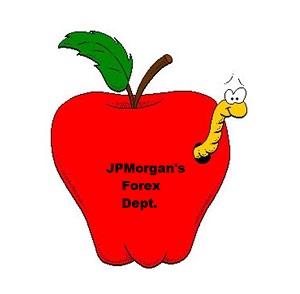 After more than 200 years of operation, yesterday JPMorgan Chase became an admitted felon. That action for foreign currency rigging came less than two years after the bank was charged with two felony counts and given a deferred prosecution agreement for aiding and abetting Bernie Madoff in the largest Ponzi fraud in history. The felony counts came amid three years of non-stop charges against JPMorgan Chase for unthinkable frauds: from rigging electric markets to ripping off veterans to charging credit card customers for fictitious credit monitoring and manipulating the Libor interest rate benchmark.

Against this backdrop of a serial crime spree on the part of employees on multiple continents and coast to coast in the United States, JPMorgan released a statement yesterday regarding the bank pleading guilty to a felony charge for engaging in the rigging of foreign currency trading, calling it “principally attributable to a single trader.” In the statement, Dimon says the bank has a “historically strong culture.”

Dimon is, if nothing else, a master of the grand illusion.

In 2012, when Dimon was asked about reports in the press that one of his London traders was making massive bets in derivatives, he called the matter a “tempest in a teapot.” That tempest, dubbed the London Whale scandal, cost JPMorgan Chase at least $6.2 billion in losses, over $1 billion in fines, and a scathing 306-page report from the U.S. Senate’s Permanent Subcommittee on Investigations. Senator Carl Levin, Chair of the Subcommittee at the time, said JPMorgan “piled on risk, hid losses, disregarded risk limits, manipulated risk models, dodged oversight, and misinformed the public.”

Attempting to foster the illusion that there was simply one bad apple behind JPMorgan having to finally plead guilty to a felony is not only an insult to the public, it flies in the face of five regulators’ findings in the matter. JPMorgan’s involvement in the rigging of foreign currency has now been looked at by the Commodity Futures Trading Commission (CFTC), the Office of the Comptroller of the Currency (OCC), the U.S. Justice Department, the Federal Reserve, and the U.K.’s Financial Conduct Authority. Not one of these regulators alluded to the problem as being one bad apple.

The CFTC placed the blame squarely at the feet of management, writing: “This conduct occurred at various times over the course of the Relevant Period without detection by JPMC in part because of internal controls and supervisory failures at JPMC.”

The U.K.’s Financial Conduct Authority (FCA) detailed a wide scale breakdown of management failures and risk controls and stated that JPMorgan’s front office was actually “involved in the misconduct.” The FCA wrote:

“Pursuant to its three lines of defence model, JPMorgan’s front office had primary responsibility for identifying, assessing and managing the risks associated with its G10 spot FX trading business. The front office failed adequately to discharge these responsibilities with regard to the risks described in this Notice. The right values and culture were not sufficiently embedded in JPMorgan’s G10 spot FX trading business, which resulted in it acting in JPMorgan’s own interests as described in this Notice, without proper regard for the interests of its clients, other market participants or the wider UK financial system. The lack of proper controls by JPMorgan over the activities of its G10 spot FX traders meant that misconduct went undetected for a number of years. Certain of those responsible for managing front office matters were aware of and/or at times involved in the misconduct.”

According to the U.S. Justice Department’s plea agreement with JPMorgan Chase, handed down yesterday, both “currency traders” and “sales staff” were involved in widespread wrongdoing. The plea agreement, to which JPMorgan consented, states:

“In addition to its participation in a conspiracy to fix, stabilize, maintain, increase or decrease the price of, and rig bids and offers for, the EUR/USD currency pair exchanged in the FX Spot Market, the defendant, through its currency traders and sales staff, also engaged in other currency trading and sales practices in conducting FX Spot Market transactions with customers via telephone, email, and/or electronic chat, to wit: (i) intentionally working 17 customers’ limit orders one or more levels, or “pips,” away from the price confirmed with the customer; (ii) including sales markup, through the use of live hand signals or undisclosed prior internal arrangements or communications, to prices given to customers that communicated with sales staff on open phone lines; (iii) accepting limit orders from customers and then informing those customers that their orders could not be filled, in whole or in part, when in fact the defendant was able to fill the order but decided not to do so because the defendant expected it would be more profitable not to do so; and (iv) disclosing non-public information regarding the identity and trading activity of the defendant’s customers to other banks or other market participants, in order to generate revenue for the defendant at the expense of its customers.”

As of December 31, 2014, the commercial bank of JPMorgan Chase held $1.4 trillion in domestic and foreign deposits and $2.074 trillion in assets, making it the largest bank by assets in the United States. On February 12, the U.S. Treasury’s Office of Financial Research (OFR), released a study of the banks that posed the greatest systemic risk to the global financial system. Using systemic risk scores that evaluated size, interconnectedness, substitutability, complexity, and cross-jurisdictional activities, JPMorgan came in with the most dangerous score of 5.05 for U.S. mega banks. And here’s the scariest part of the OFR study: it didn’t evaluate criminal recidivist behavior. What would JPMorgan’s score have been if that aspect had been factored in?

Yesterday’s sobering actions by the U.S. Justice Department will be meaningless unless Congress wakes up and breaks up Wall Street’s behemoth banks by restoring the Glass-Steagall Act.