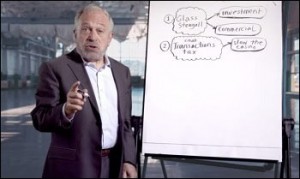 Robert Reich, former Labor Secretary in Bill Clinton’s administration and currently Professor of Public Policy at the University of California at Berkeley, is an important voice for tackling income inequality in America by bringing back the Glass-Steagall Act, busting up the too-big-to-fail banks, and imposing a securities transaction tax.

In 2013, Reich released a documentary, “Inequality for All,” that demonstrated that there is a finite equilibrium of income distribution at which the U.S. economy can grow and prosper. In 1928 and 2007, the year before each of the greatest financial crashes in our nation’s history, income inequality peaked. When workers are stripped of an adequate share of the nation’s income, they are not able to function as consumers, creating a vicious cycle of layoffs and slow economic growth – the situation the U.S. has been mired in since the Wall Street crash of 2008.

Unfortunately, Reich, an otherwise clear-eyed progressive has a deep blind spot. Her name is Hillary Clinton. In a column posted to his blog last month, Reich had this to say about Hillary:

“In declaring her candidacy for President she said ‘The deck is stacked in favor of those at the top. Everyday Americans need a champion and I want to be that champion.’

“Exactly the right words, but will she deliver?

“Some wonder about the strength of her values and ideals. I don’t. I’ve known her since she was 19 years old, and have no doubt where her heart is. For her entire career she’s been deeply committed to equal opportunity and upward mobility.”

This is more than a dangerous, rickety limb for Reich to be climbing out on when the financial stability of the nation hangs in the balance. During the primary challenge in 2008 between Barack Obama and Hillary, Reich made headlines by endorsing Obama despite his long-term friendship with the Clintons. That decision was at least partly influenced by what Reich called Hillary Rodham Clinton’s (HRC’s) “Odd Economics.” In an April 2008 post on his blog, Reich appeared to intuitively understand that the same men who deregulated Wall Street and mushroomed the derivatives gambling casino under Bill Clinton would be back in power in a Hillary presidency. Reich wrote:

“HRC’s other idea is to create a commission on foreclosures, headed by Alan Greenspan, Bob Rubin, and Paul Volcker. Yet Greenspan is more responsible for the housing mess than any other single person in Washington or on Wall Street. It was, after all, Greenspan whose Fed lowered short-term interest rates be lowered to 1 percent in 2003 – making money so cheap that every financial institution eagerly lent it to any halfway sentient human being. And it was Greenspan who argued that neither the Fed, the Commodity Futures Trading Commission, nor any other pertinent oversight agency should bother to watch whether financial institutions were behaving themselves. Bob Rubin, for his part, joined Greenspan in successfully urging Congress in the late nineties to repeal the Glass-Steagall Act, the last remaining edifice separating commercial from investment banking – enabling Citigroup, which Rubin thereafter joined, to acquire Traveler’s Insurance.”

This is the detail-lite version of what happened when Robert Rubin, Bill Clinton’s Treasury Secretary, rammed through the repeal of the Glass-Steagall Act and quickly revolved through the door of its greatest beneficiary – Citigroup – strolling out eight years later with the bank in financial ruin, Wall Street in the worst collapse since the Great Depression, the U.S. economy sinking toward depression but Robert Rubin $126 million richer from his Citigroup compensation.

Despite Rubin’s trail of unprecedented hubris, President-elect Obama quickly named him as an economic advisor to his transition team. (Citigroup executives and employees ranked seventh on Obama’s list of largest campaign donors.) Reich appeared to acknowledge the failure of the Obama administration to rein in Wall Street abuses in his column of December 8, 2014 writing: “The Dodd-Frank Act, designed to prevent another Wall Street failure, has been watered down so much it’s slush. There’s been no move to resurrect the Glass-Steagall Act separating investment banking from commercial banking.”

Actually, there have been multiple pushes since 2009 to restore the Glass-Steagall Act, including a bipartisan move in 2013 by Senators Elizabeth Warren and John McCain when they and others introduced the 21st Century Glass-Steagall Act. But Obama did not do anything to engage the public behind these efforts. He continued to pretend that the watered down Dodd-Frank Act was working.

After watching the man he endorsed for President in 2008 not tame Wall Street, why would Reich, regarded as an intelligent, reasonable man, make an even riskier gamble on Hillary, who has a closer relationship with Rubin and Wall Street. As William D. Cohan wrote in the New York Times last November:

“At 76, from his twin perches at the Council on Foreign Relations, of which he is co-chairman, and at the Brookings Institution, where he founded the Hamilton Project, he remains a crucial kingmaker in Democratic policy circles and, as an adviser to the Clintons, Mr. Rubin will play an essential role in Hillary Rodham Clinton’s campaign for president in 2016, should she decide to run.”

Hillary announced her decision to run for President last month.

There is one person in America who might be able to change Robert Reich’s mind about Hillary before he blows his otherwise stellar work on taming Wall Street with an unwise gambit of getting deeper into the Hillary camp. That person is Nomi Prins, a Wall Street veteran and meticulous researcher on the democracy-shriveling nexus between Wall Street and the Oval Office.

Prins is the author of All the Presidents’ Bankers: The Hidden Alliances That Drive American Power, released just last year. Traveling around the country digging into records entombed in Presidential libraries, Prins traces the unhealthy ties between Washington and Wall Street from the panic of 1907 to the 1929 crash, right up to the political dynamics that put the 2008 financial train wreck in motion.

A column by Prins on Hillary Clinton’s Presidential attributes was posted to Paul Craig Roberts’ web site last Friday. It is not the detail-lite version on Rubin. Prins writes:

“When Hillary Clinton video-announced her bid for the Oval Office, she claimed she wanted to be a ‘champion’ for the American people. Since then, she has attempted to recast herself as a populist and distance herself from some of the policies of her husband. But Bill Clinton did not become president without sharing the friendships, associations, and ideologies of the elite banking sect, nor will Hillary Clinton. Such relationships run too deep and are too longstanding…

“Though she may, in the heat of that campaign, raise the bad-apples or bad-situation explanation for Wall Street’s role in the financial crisis of 2007-2008, rest assured that she will not point fingers at her friends. She will not chastise the people that pay her hundreds of thousands of dollars a pop to speak or the ones that have long shared the social circles in which she and her husband move…”

Detailing how Robert Rubin steered the Bill Clinton White House to the repeal of Glass-Steagall while he served as U.S. Treasury Secretary and then was instantly rewarded with a $40 million compensation package at Citigroup, Prins writes:

“Rubin’s resignation from Treasury became effective on July 2nd [1999]. At that time, he announced, ‘This almost six and a half years has been all-consuming, and I think it is time for me to go home to New York and to do whatever I’m going to do next.’ Rubin became chairman of Citigroup’s executive committee and a member of the newly created ‘office of the chairman.’ His initial annual compensation package was worth around $40 million. It was more than worth the ‘hit’ he took when he left Goldman for the Treasury post.

On May 8, 2012, Reich effectively admitted to Amy Goodman on Democracy Now! why Hillary Clinton should not be President. Reich stated:

“We’ve got to resurrect Glass-Steagall. I mean, it seems to me one of the problems we have with Wall Street right now is that there is still no constraint. The major Wall Street banks are bigger than they were before. They have better access to lower-cost money. That is, interest rates for them are at a preferable rate over other banks, so they have a competitive advantage that is going to enable them to get even larger. They know, and everybody else knows, they will be bailed out if they get in trouble, because they have already been bailed out. Without a resurrection of Glass-Steagall, and without legislation that caps the size of the biggest banks, that breaks up the biggest banks—something that the Dallas Federal Reserve Board, you know, the Dallas branch of the Federal Reserve Board, has advocated—we are going to see a replay of what happened in 2008, and with all the damage to everybody else, all of the ancillary damage to everybody else in the economy that that entails.”

By demonstrating that the only way to save the nation from the next financial collapse is to reinstate the Glass-Steagall Act, Reich is effectively saying that Hillary Clinton should not be the next President; because Hillary can’t win without Wall Street’s campaign financing and Wall Street will not finance her campaign if she runs on reinstating the Glass-Steagall Act – the destruction of which made Wall Street titans the 1 percent oligarchy.

It’s long past the time to oust the jaded Wall Street Democrats from positions of power. Robert Reich can be the catalyst or he can demur. History and his students will remember him far more kindly if he accepts the challenge.