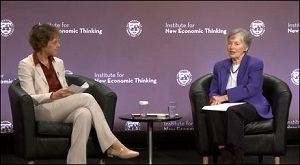 As the Wall Street Journal reports this week that two of the serially charged Wall Street banks, Citigroup and JPMorgan, along with two foreign banks, Barclays and RBS, are expected to plead guilty as early as next week to criminal charges of massive fraud in the foreign exchange markets, some of the most powerful women in the field of finance and economics were speaking at a conference in Washington D.C. and taking on the system that allows this corruption to continue unchecked – six years after it collapsed the U.S. economy and blew up Wall Street.

But the segment of the conference that has galvanized Wall Street reformers were the speeches by Brooksley Born, the former Chair of the Commodity Futures Trading Commission, and Anat Admati, a professor of finance and economics at Stanford University, a chief architect of the conference.

Brooksley Born is best known as the sole regulator in the Clinton administration who attempted to regulate derivatives and became the target of bullying by then Treasury Secretary Robert Rubin, his enforcer, Larry Summers, and Fed Chair Alan Greenspan. Frontline aired an expose on the guts Born summoned to stand up to the Wall Street enablers’ cartel. In the end, of course, Wall Street had its way and derivatives remained unregulated. Born resigned her post.

In her talk at the conference, Born takes on the preposterous proposition that markets can self-regulate. During her time at the CFTC, Born said Wall Street had poured billions of dollars into deregulation lobbying which was “supported by the fallacious beliefs championed notably by Alan Greenspan that financial markets are self regulating and that financial firms are capable of policing themselves.”

Born told the crowd that the dangers have only grown since the collapse:

Born reminded the audience that since the enactment of the Dodd-Frank financial reform legislation, the country has witnessed more frauds, manipulations and reckless behavior on the part of the very same financial firms, adding:

“With respect to derivatives trading, JPMorgan lost $6 billion through speculative trading of the London Whale and both MF Global and Peregrine Financial went bankrupt after allegedly engaging in misappropriation of customer funds. In light of all this, we must ask ourselves whether the financial and political power of our largest financial firms poses a threat to our policy making on financial regulation and seriously undercuts the administration of justice.”

Born also cautioned the public against believing that the derivatives’ market has been fixed, stating:

“Dodd-Frank gave the Commodity Futures Trading Commission an enormous new responsibility to impose regulation on this previously unregulated market which was a significant cause of the financial crisis and which is currently estimated to be $400 trillion in notional amount [face amount] in the United States and almost $700 trillion globally. It’s actually larger than it was at the time of the financial crisis…The jury is still out on whether the regulatory regime under Dodd-Frank will be adequate to address the dangers of this market…”

According to Born, too many exemptions have been carved out in the derivatives arena under Dodd-Frank, including derivatives used for hedging and foreign exchange swaps.

Professor Admati, who co-authored with Martin Hellwig the book, The Bankers’ New Clothes: What’s Wrong With Banking and What to Do About It, had equally harsh words for Wall Street and its regulators. Admati said the 2008 crash changed her life, explaining:

“What changed my life was seeing bad science and flawed claims winning policy debates…I thought at least the academics and the policymakers would engage on these issues so we can get the policy right, but I was wrong. People don’t want to engage when what you say challenges their views or their actions. They may ignore and evade. I’ve witnessed not only blind spots but what Margaret Heffernan talks about – willful blindness.”

In their seated conversational exchange following each of their formal speeches, Born said incumbents in Congress still depend on Wall Street’s campaign contributions – so they listen to the Jamie Dimons of the world and the Lloyd Blankfeins and the Alan Greenspans. Born said  she had come to the conclusion “that we can’t start to deal with the issue unless or until our biggest financial institutions are considerably cut down in size.”

Senator Elizabeth Warren delivered a dinner speech that was no less strident about the task ahead. Warren said:

“It is time for the Justice Department and the SEC to get serious about enforcing our laws against financial fraud. These agencies don’t take big financial institutions to trial – ever! Even when financial institutions engage in blatantly criminal activity. Instead, they use what they call deferred prosecution agreements or non prosecution agreements – in which they ask the offending firm, pretty please, to pay a fine and work with the government to come up with the plan for doing better in the future.”