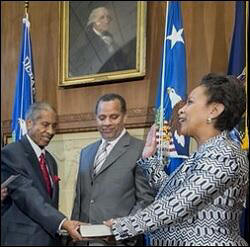 Loretta Lynch Is Sworn In on Monday, April 27, 2015 as U.S. Attorney General; She’ll Now Be Responsible for the Flash Crash Case

The Justice Department’s case against the 36 year old lone bedroom trader in the U.K., Navinder Singh Sarao, has now been thoroughly discredited by every Wall Street veteran who has studied it, most pointing out that what Sarao did is happening every second that Wall Street is open for business. Business writers at the New York Times, Financial Times, Newsweek, and Bloomberg View have given the charges an unequivocal thumbs down.

The Justice Department’s complaint itself is unusual. It consists of a one page complaint cover sheet followed not by a detailed breakdown of the counts but by an affidavit from an FBI agent. The case is filed in the Federal District Court in the Northern District of Illinois but no U.S. Attorney or Assistant U.S. Attorney from that district has signed this complaint. The names listed at the top of the first page, more as a reference since they have not signed any part of this complaint, are Department of Justice Fraud Section Assistant Chief Brent S. Wible and Fraud Section Trial Attorney Michael T. O’Neill. Both show phone numbers with the 202 area code, meaning this case came out of the Washington, D.C. office of the Justice Department, not the Northern District of Illinois where the futures market that Sarao is charged with manipulating is located.

The case is based largely on analysis from an unnamed “consulting group” and a “professor and academic researcher who studies and has written extensively on financial markets and algorithmic trading.” Given the public drubbing of this case, that professor is now likely climbing deeper into his hole of anonymity.

Add all of the above to the fact that the case is coming out of the blue, five long years after the Flash Crash of May 6, 2010, and after regulators had already fingered mutual fund company Waddell & Reed as the key culprit in their lengthy report of 2010, and you are left with the highly intriguing question as to what the real motivation is for the Justice Department to go out on such a precarious limb with this case.

Four schools of thought come readily to mind. First is that the Justice Department wants to frighten off the tens of thousands of solo day traders who are jazzing up pre-packaged software and periodically beating the Wall Street big boys at their own game of spoofing and layering. Next is that Sarao may be some kind of genius trader or software developer and Wall Street wants him extradited to deploy his talents on this side of the pond. Third, there may be more to the FBI’s case than we know: for example, why was a mega global bank like Credit Suisse financing Sarao’s trading. Was there more to this relationship than is presently known? And, finally, elements of all three of the above scenarios may be in play. We’ll look at each of the first three elements separately.

There is no question, whatsoever, that prosecutors can be seduced into doing the bidding of the big Wall Street firms. One only needs to look closely at the serial prosecution of Sergey Aleynikov and the separate Squawk Box case to understand how very true this is.

Sergey Aleynikov was a brilliant Russian programmer working for Goldman Sachs when he received an offer to move to a hedge fund. Aleynikov accepted the offer but agreed to stay at Goldman for six weeks to train his colleagues, exhibiting a decided show of good faith. However, he made the bad judgment of downloading  some code before he left. That was 2009.

Over the past six years, Aleynikov has been arrested and jailed by the Feds, had his conviction overturned by the Second Circuit Appeals Court, rearrested by the Manhattan District Attorney Cyrus Vance, and is this very week awaiting word on his fate from a jury – where allegations of food poisoning of a juror are now in the mix.

For those who believe prosecution for the same alleged crime is not allowed in the United States, you obviously have never lived in New York City. Aleynikov is said to be one of the most brilliant coders on Wall Street. Keeping him tied up in court and out of the hands of the competition is a key benefit to Goldman Sachs.

In December 2010, the Second Circuit Court of Appeals found that Aleynikov had neither taken a tangible good from Goldman Sachs nor had he stolen a product involved in interstate commerce – writing that at oral argument the government “was unable to identify a single product that affects interstate commerce.” That didn’t slow down this relentless prosecution at all.

Then there is the Squawk Box case where six Wall Street men lost their careers, were subjected to two jury trials, convicted and sentenced – while two SEC attorneys and two attorneys for the Justice Department sat on deposition transcripts that could have cleared the defendants of the central charge in the case.

Who else had a hand in the travesty? The General Counsel’s office of Merrill Lynch sat on those depositions after hearing the testimony first hand. John Gleeson, a Federal District Court Judge, after the depositions surfaced shortly after sentencing and he was made aware of them, refused a petition for retrial.

The charges were first brought in 2005 and were specious from day one. Prosecutors from the U.S. Attorney’s office in Brooklyn alleged that three brokers from Merrill Lynch, Smith Barney and Lehman Brothers misappropriated confidential information from their firms by placing phones next to the internal public address system known as the “Squawk Box” and letting day traders at A.B. Watley listen in. The prosecutors based their case on the premise that this information was “confidential.” To suggest that anything coming over a “public address system” in an office filled with clients, cleaning people, delivery guys from the deli, and mutual fund peddlers is “confidential” is beyond fantasyland.

Here is a sample of the testimony the SEC withheld from the depositions:

Mr. Murphy [lawyer for the SEC]: “Just to make sure I understand, is it your testimony that, in your opinion, customer order flow information ceases to be confidential the moment it is announced on the squawk box?”

The Witness [Brian Hull, Merrill Lynch executive]: “I guess what I want to make sure of is in terms of when we say confidential.  Client orders and client relationships are always confidential, but when the trader goes over the squawk box and gives an indication, he could have already sent that order – let’s just say it was a listed order on the New York Stock exchange – he could have already put that order on the floor and could be in the crowd displaying that interest as well.  So he could be down on the floor protecting that client’s buy order in the marketplace and simultaneously or right after making the call on the squawk box to say I’m a buyer of – again, in my example of 50,000 Chrysler – and instantly sales traders are sharing that with a very broad section of our client base.”

The Court of Appeals for the Second Circuit handed down a scathing reversal on August 2, 2012, noting that “the two trials were both unfairly skewed against the defendants, who were forced to mount their defenses without the benefit of material exculpatory and impeaching sworn testimony.” Read the full Second Circuit Court of Appeals Decision in United States v Mahaffy [a/k/a Squawk Box Case Court Decision]

The next school of thought focuses on whether Sarao is perceived by Wall Street as another Sergey Aleynikov – too smart to be out on the loose. Part of the FBI affidavit focuses on the fact that Sarao asked a trading software company to customize the program he was using to enter his trades on the E-mini futures contract on the Standard and Poor’s 500 index. According to the affidavit, Sarao told the programmer he would “like to be able to alternate the closeness ie one price away or three prices away etc etc” and “to be able to enter multiple orders at different prices using one click” and allow his “order [to] be pulled if there are not x amount of orders beneath it.” The FBI notes that this system obviously worked well because Sarao wrote back that “the formula the guy set up … has already been a good help.”

The FBI agent goes on to say that Sarao then asked if he could have the code for this program so that he could play around with it and customize it further. That leaves a big void of information in Wall Street’s mind: what has Sarao done with this code? Is he selling it to Credit Suisse, other global banks, or thousands of other bedroom traders clicking away through the trading night in their jammies?

Maybe someone powerful on Wall Street simply wants a good look at this customized code. There is a raging battle on Wall Street to stay ahead of the competition in technology and programmers. Jamie Dimon reported in his letter to shareholders last year that JPMorgan now has over 30,000 programmers and information technology employees – more than Google or Microsoft according to one of the company’s top execs.

Every major firm on Wall Street is patenting its trading technology faster than you can say high frequency trading. Here’s an interesting line from a patent owned by Goldman Sachs, Patent Number 8,571,967 titled: System and Method for Algorithmic Trading Strategies: “In another example (which example is intended to be illustrative and not restrictive), the algorithm may allow the users to dynamically change their price limits and/or order size.”

Among the hundreds of patents owned by JPMorgan, Patent Number 8,442,885, titled Algorithmic Trading Management System and Method wants to give its traders the same opportunity to do what Sarao asked to do: to be able to further customize a trading program to meet ongoing needs by the trader. The summary of the patent reads:

“Embodiments of the invention are directed to a computer-implemented system and method for facilitating electronic market participation of traders…The system may additionally include sequence modification components for allowing traders to modify algorithms collected from external sources in order to customize trading orders. The system may further include operator intervention tools for allowing traders to manually influence sequence execution through a user interface.”

Finally, there is that decidedly troubling fact that Credit Suisse, a banking giant, is financing a tiny bedroom trader like Sarao. The Wall Street Journal reported that the arrangement between Credit Suisse and Sarao occurred just two days prior to the Flash Crash on May 6, 2010.  Reuters reported that “This was the first confirmation of an external institution providing financing to Nav Sarao…”

In the meantime, Sarao, who is alleged by the U.S. government to have made $40 million from his trading strategies, remains in a jail cell, unable, at present, to make bail.

The May 6 Stock Crash Revisited

Shhh. Don’t Wake Congress. Let Them Sleep Through the Next Wall Street Crash