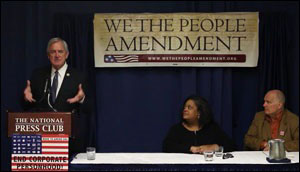 Last Wednesday, the grassroots organization, Move to Amend, held a press conference at the National Press Club to announce that six members of the U.S. House of Representatives were introducing legislation to overturn Citizens United v FEC to make free speech and all other rights guaranteed under the U.S. Constitution available only to “natural persons,” not corporations or limited liability companies. The legislation would also give Federal, state and local governments the ability to limit political contributions to “ensure all citizens,  regardless of their economic status, have access to the political process.”

When corporations overturn the will of the people, it’s widely covered by corporate media. When the people fight back, the news is frequently blacked out. As of this morning, we could find no major corporate media outlet or corporate wire service reporting on last Wednesday’s press conference by Move to Amend. That might be because there was evidence presented at the press conference of a groundswell of public momentum to overturn Citizens United, the decision handed down on January 21, 2010 by the U.S. Supreme Court that opened the floodgates to corporate campaign spending in elections along with super wealthy donors.

The press conference revealed that 16 states have passed resolutions asking Congress to overturn Citizens United while almost 600 municipalities and local governments across the country have done likewise. Almost two dozen other states have resolutions pending or introduced.

Congressman Rick Nolan of Minnesota spoke at the press conference, telling attendees that “Good and successful movements in this country have always started with ordinary people who commit to accomplishing great things. And so it was with ending slavery, with child labor laws, environmental laws, women’s suffrage, civil rights, the progressive income tax, Social Security, Medicare, rights for the disabled – you name it – this movement transcends labels, it transcends political parties, it transcends regions and it transcends generations.”

Nolan added that “America’s future and American democracy is dependent upon the success of this movement.” In addition to Nolan, co-sponsors of the bill include Mark Pocan (WI), Matthew Cartwright (PA), Jared Huffman (CA), Raul Grijalva (AZ), and Keith Ellison (MN).

Leesa “George” Friday, who has been part of this grassroots movement since its beginning in 2009, said “Democracy isn’t a gift that we’re given, it’s a right. And with that right comes the responsibility to do a little bit more than just go to the polls every now and then or volunteer for a campaign, write a check or make some phone calls. It means being vigilant about what democracy means; about holding sacred that democracy; and doing the work.”

David Cobb, a member of the National Leadership Team of Move to Amend and the Green Party presidential candidate in 2004, called what has happened a “corporate coup d’etat” and said the group was broadening its strategy to include “Pledge to Amend,” where candidates running for office will be asked to pledge to support a constitutional amendment in order to get the support of voters, the majority of whom despise Citizens United.

The corporate coup d’etat could not have happened, of course, without the vote of five members of the U.S. Supreme Court in the Citizens United decision, which was written by Justice Anthony Kennedy with concurrence from Chief Justice John Roberts, Antonin Scalia, Clarence Thomas and Samuel Alito.

“The conceit that corporations must be treated identically to natural persons in the political sphere is not only inaccurate but also inadequate to justify the Court’s disposition of this case. In the context of election to public office, the distinction between corporate and human speakers is significant. Although they make enormous contributions to our society, corporations are not actually members of it. They cannot vote or run for office. Because they may be managed and controlled by nonresidents, their interests may conflict in fundamental respects with the interests of eligible voters. The financial resources, legal structure, and instrumental orientation of corporations raise legitimate concerns about their role in the electoral process. Our lawmakers have a compelling constitutional basis, if not also a democratic duty, to take measures designed to guard against the potentially deleterious effects of corporate spending in local and national races.”

The four dissenters also found that:

“The majority’s approach to corporate electioneering marks a dramatic break from our past. Congress has placed special limitations on campaign spending by corporations ever since the passage of the Tillman Act in 1907…We have unanimously concluded that this ‘reflects a permissible assessment of the dangers posed by those entities to the electoral process…’ ”

The view of the dissenters happens to dovetail with the majority view of the American people — meaning that five men in robes can overturn the will of a nation of 319 million citizens.

In July of last year, Democracy Corps, the polling organization for Democrats, released a survey that found “a deep hostility to Super PACs” and “strong support” for candidates “who battle to reduce the influence of big money and for changes that empower the ordinary citizen…”

The poll was taken among likely voters in 12 states with hotly contested Senate races. On the issue of a constitutional amendment to overturn Citizens United, the survey found overwhelming support, a “73 to 24 percent margin, including majorities in even the reddest states.”

This would not be the first time an out of control Supreme Court had to be reined in. Of the current 27 constitutional amendments, eight were enacted to overturn outrageously out-of-step Supreme Court rulings.

A recent joint analysis by the Center for Responsive Politics and the Sunlight Foundation found just how perverted elections have become under the Citizens United decision. According to the study, in the 2014 midterms, one percent of one percent of the total population of the United States, “accounted for an astounding $1.18 billion in disclosed political contributions at the federal level.”

The study also looked at the zip codes where the wealthiest campaign donors reside. It will come as no surprise that just five zip codes in New York City, ensconced by Wall Street’s plundering herd, coughed up $80 million.

Other groups have joined in the valiant, mushrooming effort to overturn Citizens United. From Public Citizen, to Common Cause, to Free Speech for People, to burgeoning local grassroots movements, there is growing momentum to overturn the gang of five on the Supreme Court. It’s not a matter of if, it’s just a matter of when.

You can be a critical part of accelerating that outcome by taking one or more of the following actions: