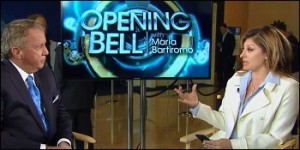 Prosecutors from the U.S. Justice Department have already lost their case in the court of public opinion against Navinder Singh Sarao, the man they allege fueled the Flash Crash in the stock market on May 6, 2010, trading from his bedroom in his parents’ house in the U.K.

Yesterday, Terry Duffy, Executive Chairman of the CME Group and the man who sits atop the futures market in Chicago where the Justice Department alleges Sarao tricked the market into a collapse, threw cold water on hopes of building this case before a jury. Duffy told Maria Bartiromo the following in an interview on Fox Business News:

Sarao is charged by the Justice Department with inflicting carnage through the use of the E-mini, a futures contract based on the Standard and Poor’s 500 index. Chicago is one-hour behind New York. The crux of the Justice Department’s Flash Crash case against Sarao is this: “Between 12:33 p.m. and 1:45 p.m., Sarao placed 135 sell orders consisting of either 188 or 289 lots, for a total of 32,046 contracts. Sarao canceled 132 of these orders before they could be executed.”

Duffy is going to make an excellent witness for the defense. Two weeks after the Flash Crash, Duffy testified before the U.S. Senate that “Total volume in the June E-mini S&P futures on May 6th was 5.7 million contracts, with approximately 1.6 million or 28 per cent transacted during the period from 1 p.m. to 2 p.m. Central Time.” That means that between 2 p.m. and 3 p.m. New York time, 1.6 million E-mini contracts traded. Sarao’s contracts during that period represented a mere 2 percent of E-mini trades and the majority of his trades were cancelled.

Gary Gensler, the former Chairman of the Commodity Futures Trading Commission is going to make another outstanding witness for the defense. Gensler told a House Subcommittee the day after the Flash Crash that one trader “entered the market at around 2:32 and finished trading by around 2:51.  The trader had a short futures position that represented on average nine percent of the volume traded during that period.  The trader sold on the way down and continued to do so even as the price level recovered.  This trader and others have executed hedging strategies of similar size previously.”

This trader is clearly not Sarao as he was not in the market at 2:51 p.m. and did not represent 9 percent of the volume.

Another great witness for the defense will be Rajiv Sethi, Economics Professor at Barnard College who has penned an OpEd for the New York Times pouring more cold water on the Justice Department’s case. Sethi writes:

“Prosecutors also say that he [Sarao] manipulated prices on the Chicago Mercantile Exchange for years by ‘spoofing,’ or placing orders that he intended to cancel before they were filled. In fact, this is a common activity in equities markets today. The prosecution of Mr. Sarao is arbitrary, and his contribution to the flash crash was negligible.”

Spoofing is so common on Wall Street that the law firm Robbins Geller Rudman & Dowd LLP – a firm staffed with former prosecutors from the U.S. Justice Department – filed a class action lawsuit on April 18, 2014 against the major Wall Street firms and the stock exchanges for routinely tolerating the abuse along with a myriad of other high frequency trading frauds on the market. (That case has since been consolidated with others, leaving just the stock exchanges and Barclays as defendants.)

The original complaint on behalf of the City of Providence, Rhode Island alleged that “For at least the last five years, the Defendants routinely engaged in at least the following manipulative, self-dealing and deceptive conduct.” The complaint then specifically mentions “spoofing” and “layering,” the same techniques Sarao is charged with using by the Justice Department.

The Robbins Geller lawsuit charges that the high frequency traders (HFTs) use spoofing to “send out orders with corresponding cancellations, often at the opening or closing of the stock market, in order to manipulate the market price of a security and/or induce a particular market reaction.” The lawsuit claims layering is used to “send out waves of false orders intended to give the impression that the market for shares of a particular security at that moment is deep in order to take advantage of the market’s reaction to the layering of orders.”

The complaint goes on to say that “In 1999, there were 1,000 quotes per second, streaming from U.S. stock exchanges and approximately two billion shares traded each day.  Today, there are two million quotes per second, but the market trades just over five billion shares per day, which is just over twice the volume of stock traded, but 2,000 times more quotes.  These quotes are essentially HFTs at war with each other, to the detriment of the investing public.”

Another key witness for Sarao will be former SEC Chair, Mary Schapiro. Speaking before the Economic Club of New York on September 7, 2010, just four months after the Flash Crash, Schapiro explained just how common this quote stuffing had become. Schapiro told the crowd:

“These high frequency trading firms can generate more than a million trades in a single day and now represent more than 50 per cent of equity market volume. And many firms will generate 90 or more orders for each executed trade. Stated another way: a firm that trades one million times per day may submit 90 million or more orders that are cancelled.”

Another serious problem for the government’s case against Sarao is what was happening at the stock exchanges in New York at the worst levels of the downdraft. As we previously reported:

“According to reports of time and sales, around 2:45 p.m. when the massive market disruption got underway, Procter & Gamble traded at $59.66.  It had opened the day at $61.91.  About a minute later, it was trading at $57.36, then $53.51, then it hit a liquidity air pocket and plunged to print a trade at $39.37.  This created panic in the market.  If one of the most conservative stocks can hit a 36 percent downdraft, some traders thought a major news event was happening outside.  Liquidity hit a wall.   In an eight minute span, the Dow lost $700 billion and saw a cumulative decline of 998.5 points or 9.2 percent before turning on a dime and moving in the opposite direction. It closed the day down 3.2 percent.

“Aggravating the liquidity crunch on May 6 was the fact that the New York Stock Exchange, where Procter & Gamble is listed, paused trading momentarily to let humans on the floor of the exchange attempt to find buying support. That pause sent trades off to the world of electronic exchanges which now make up the bulk of all trading in the U.S.  The New York Stock Exchange has only a 25 percent market share in its own listed stocks.  The cowboys of capitalism command the rest.

“To underscore how dramatic and unprecedented the trading in Procter & Gamble was on May 6, I reflected back to the day I sat behind a Wall Street terminal and watched the market lose 22.6 percent in one day.  That day was October 19, 1987.  That was more than twice the percentage drop at the worst market point on May 6.  And yet, Procter & Gamble lost only 28 percent at its worst point in 1987 versus 36 percent on May 6 when the overall market was down less than 10 percent.

“When a bear raid knocks out these stop loss speed bumps on Dow components like Procter & Gamble and 3M (it lost 21 percent at its worst point), the New York Stock Exchange pauses trading momentarily and trades are left to the feckless electronic exchanges, proprietary trading desks of the bailout boys (big Wall Street firms) and high frequency traders.  This is like hitting an air pocket at 30,000 feet, then opening the cockpit door to find out no one is inside and the plane is on autopilot as the plane goes into a nose dive.”

Right now, this case looks next to impossible to win before a jury. Tomorrow we’ll take a deeper look into what may be motivating the Justice Department and Commodity Futures Trading Commission to bring this case five years after the Flash Crash happened.