St. Louis Fed President Bullard Is Talking About Tightening; Can An Economic Slump Be Far Behind? 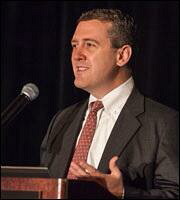 Since the depths of the financial crisis in 2008 and 2009, James Bullard, President of the Federal Reserve Bank of St. Louis, has been talking up a storm and moving markets. On multiple occasions, however, after Bullard has talked up tightening, he’s had to backtrack and urge easier monetary policy as the U.S. economy wilted back into subpar GDP growth.

Yesterday, at a presentation to the annual Hyman P. Minsky “Conference on the State of the U.S. and World Economies,” Bullard made a case for the Fed raising interest rates sooner than the markets expect. Among the key points presented in his slide presentation were that “U.S. labor markets have been improving at a rapid pace over the last year,” and “U.S. GDP growth prospects remain relatively robust.”

Dow Jones’ MarketWatch called Bullard “a leading hawk on the Federal Reserve” in its report yesterday on his talk. But Bullard is actually an enigma at the Fed, vacillating between dove and hawk on a regular basis depending on what the data is showing about the recovery.

In the September/October 2010 edition of the Federal Reserve Bank of St. Louis Review, Bullard penned a paper titled Seven Faces of ‘The Peril’. The paper argued that the U.S. economy could be heading for a “Japanese-style deflationary outcome” within the next several years and urged more quantitative easing, a decidedly dovish position. Bullard wrote:

“The global economy continues to recover from the very sharp recession of 2008 and 2009. During this recovery, the U.S. economy is susceptible to negative shocks that may dampen inflation expectations. This could push the economy into an unintended, low nominal interest rate steady state. Escape from such an outcome is problematic. Of course, we can hope that we do not encounter such shocks and that further recovery turns out to be robust—but hope is not a strategy. The United States is closer to a Japanese-style outcome today than at any time in recent history.”

“To promote a stronger pace of economic recovery and to help ensure that inflation, over time, is at levels consistent with its mandate, the Committee decided today to expand its holdings of securities. The Committee will maintain its existing policy of reinvesting principal payments from its securities holdings. In addition, the Committee intends to purchase a further $600 billion of longer-term Treasury securities by the end of the second quarter of 2011, a pace of about $75 billion per month.”

During QE1, the Federal Reserve had purchased $1.25 trillion of mortgage-backed securities, $175 billion of agency debt and $300 billion of U.S. Treasuries.

On August 23, 2012, Bloomberg News reported that Bullard “has said this year he expects the FOMC to begin tightening policy in late 2013…” But by June 2013, Bullard cast a dissenting vote on the FOMC, opposing the Fed laying out a timeline for ending QE. The following month, the Fed announced QE3, adding $40 billion each month in new purchases of mortgage-backed securities, bringing its total now to $85 billion per month in bond purchases.

But just four months later, in an interview with Bloomberg News, Bullard was walking back that talk, stating: “Inflation expectations are declining in the U.S.” and adding “That’s an important consideration for a central bank. And for that reason I think that a logical policy response at this juncture may be to delay the end of the QE.”

This time around, the FOMC ignored Bullard and announced the end of QE3 on October 29, 2014, writing:

“The Committee judges that there has been a substantial improvement in the outlook for the labor market since the inception of its current asset purchase program. Moreover, the Committee continues to see sufficient underlying strength in the broader economy to support ongoing progress toward maximum employment in a context of price stability. Accordingly, the Committee decided to conclude its asset purchase program this month. The Committee is maintaining its existing policy of reinvesting principal payments from its holdings of agency debt and agency mortgage-backed securities in agency mortgage-backed securities and of rolling over maturing Treasury securities at auction. This policy, by keeping the Committee’s holdings of longer-term securities at sizable levels, should help maintain accommodative financial conditions.”

Before Bullard gets too bullish on the U.S. labor market, he might want to study the data released by Gallup CEO, Jim Clifton. In early February, Clifton wrote as follows:

Perhaps Bullard might want to use his bully pulpit to bring greater clarity to the real labor conditions in the U.S.