Faux Democracy and the Tea Party: How Far Back Does It Go? 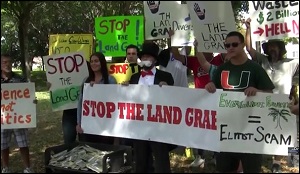 Manipulating Americans to organize or protest against their own interests is the sine qua non of big corporate front groups. These groups are alternately known as astroturf organizations because the grass in “grassroots” is fake turf.

Just how fake that turf is came into crisp perspective on April 2 when Christine Stapleton, an investigative reporter at the Palm Beach Post, revealed that a protest rally called by the Tea Party of Miami and Florida Citizens Against Waste used paid actors from the Broward Acting Group as faux protesters. (Watch a video here.) 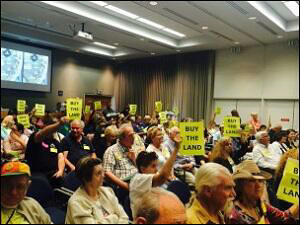 Real Citizens Show Up to Protest the State’s Failure to Purchase Land for Everglades Restoration in March 2015; Paid Actors Hold a Counter Protest on April 2

The fake protest was in response to more than 100 real citizens turning out the prior month to demand that the South Florida Water Management District, a state agency, exercise its option before it expires to purchase 48,600 acres of corporate land owned by U.S. Sugar, a huge sugar cane grower in South Florida. According to studies and experts, the land purchase is vital to preventing marine life die-offs in the Caloosahatchee and St. Lucie River basins and along the Indian River Lagoon.

Laura Reynolds, Executive Director of the Tropical Audubon Society, explained what’s at stake: “The purchase can solve the problems of getting sufficient water for the Everglades and greatly reducing the damaging pulses of polluted fresh water to the northern estuaries while delivering much needed clean water to the southern estuaries.”

Corporate front groups do not want to see more land owned by government because with it comes the ability to regulate it against pollution. The Tea Party’s mantra against “big government” is a pseudo cover against government regulation of big business. The Koch brothers involvement in the modern Tea Party movement is by now well known. Much less understood is just how far back the roots of our Faux Democracy under Koch brothers’ financing extend.

On February 8, 2013, the health professionals’ journal, Tobacco Control, published a comprehensive report on the roots of the Tea Party, dating it to the 1980s.  The research was funded by the National Institute of Health (NIH), a Federal Agency and titled ‘To Quarterback Behind the Scenes, Third Party Efforts’: The Tobacco Industry and the Tea Party.

The authors reveal that Citizens for a Sound Economy (CSE), which split into Americans for Prosperity and FreedomWorks in 2004, “was co-founded in 1984 by David Koch, of Koch Industries, and Richard Fink, former professor of economics at George Mason University, who has worked for Koch Industries since 1990.” According to the report, “CSE supported the agendas of the tobacco and other industries, including oil, chemical, pharmaceutical and telecommunications, and was funded by them.”

Long before the Tea Party attracted media attention, CSE started the first online Tea Party in 2002, calling it the US Tea Party. The NIH-funded study shows that between 1991 and 2002, Philip Morris and other tobacco companies gave CSE at least $5.3 million.

CSE was a pure Koch-created organization and considered an integral part of the Philip Morris strategy to thwart Federal regulation of cigarettes and second hand smoke. The study shows that Philip Morris  designated CSE a “Category A” organization for funding and it was assigned its own Philip Morris senior relationship manager.

In 1994 and 1995, Philip Morris and other tobacco companies launched an assault, using nonprofit front groups including CSE, to undermine the credibility of the Food and Drug Administration (FDA) which was attempting to regulate second-hand smoke. One Philip Morris memo in late 1994 indicated that CSE and other front groups were working “to define the FDA as an agency out of control and one failing to live up to its congressional mandate regarding regulation of drugs and medical devices.”

Beginning in December 1994, the memorandum stated, “these groups conducted an aggressive media campaign toward these goals, incorporating the issuance of policy papers, conducting symposia, filing petitions with FDA and taking other steps to keep the public and media focus on the agency.” CSE developed a 15-page strategy document for gutting the FDA’s funding and keeping it under withering media glare.

In 1999, the U.S. Department of Justice sued the largest tobacco companies under the Racketeer Influenced and Corrupt Organizations Act (RICO). The government charged that the tobacco companies engaged in a 40-year conspiracy to mislead the public about the dangers of smoking, distort the dangers of secondhand smoke, and target the youth market as “replacement smokers.”

After a nine-month bench trial, on August 17, 2006, Judge Gladys Kessler of the U.S. District Court for the District of Columbia issued a 1,683 page opinion.  The Court found that “Cigarette smoking causes disease, suffering, and death. Despite internal recognition of this fact, defendants have publicly denied, distorted, and minimized the hazards of smoking for decades.”

The Court also found that lawyers for Big Tobacco had played an unconscionable role in the conspiracy, writing:

“At every stage, lawyers played an absolutely central role in the creation and perpetuation of the Enterprise and the implementation of its fraudulent schemes. They devised and coordinated both national and international strategy; they directed scientists as to what research they should and should not undertake; they vetted scientific research papers and reports as well as public relations materials to ensure that the interests of the Enterprise would be protected; they identified ‘friendly’ scientific witnesses, subsidized them with grants from the Center for Tobacco Research and the Center for Indoor Air Research, paid them enormous fees, and often hid the relationship between those witnesses and the industry; and they devised and carried out document destruction policies and took shelter behind baseless assertions of the attorney client privilege.”

Americans for Prosperity is just one tentacle in a massive matrix of  interconnected nonprofits created, overseen or funded by billionaires Charles and David Koch. The nonprofits have words like liberty or freedom or tea party in their names but preach an anti-regulation, anti-union, anti-social security/medicare mantra.

In 2010 we exposed how Donors Capital, which has the fingerprints of Charles Koch smudged all over it, bankrolled a $17 million project carried out by the nonprofit Clarion Fund to distribute 28 million DVDs of a race-baiting, Islamophobic documentary titled “Obsession: Radical Islam’s War Against the West.” The DVDs were blanketed across swing voter states just seven weeks before the Presidential election of 2008.

Corporate media was a willing participant in the effort. The DVDs were inserted into approximately 100 major newspapers and magazines across the U.S., along with a direct mail campaign. Simultaneously, there was an ongoing smear campaign suggesting that the election of Barack Obama would put a Muslim in the White House and elevate Islam in the U.S.

While the Koch brothers have clearly been honing their skills at Faux Democracy since 1984 with the gag-worthy Citizens for a Sound Economy, we’ll present our research tomorrow suggesting that the high-priestess of anti-government rhetoric, Ayn Rand, was at work with corporate front groups a full half-century earlier.