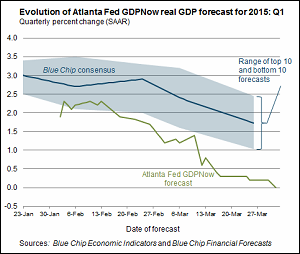 Yesterday, economists at the Federal Reserve Bank of Atlanta notched down their forecast for U.S. economic growth in the first three month of 2015 from 0.2 percent to zero. To put it another way, if the U.S. economy was a hospital patient, it would be flat-lining with an emergency team huddled around it attempting to shock it back to life with defibrillators.

The forecast for GDP growth has been coming down steadily at the Atlanta Fed while the Federal Reserve in Washington, D.C. has been releasing Federal Open Market Committee (FOMC) statements highlighting the strength of the economy and talking about the potential for a rate hike to ward off inflation that comes from an overheating economy.

All of the rate hike talk this year has kept the country focused on the wrong data point. The debate should not be about when the Fed will raise interest rates but about when the U.S. will finally break out of its economic doldrums. Why is the media obsessed with the timing for a liftoff in interest rates instead of a liftoff in the economy after five long, painful years of subpar growth.

Only a few brave souls dare to challenge the happy talk on the economy. On February 10, Steve Ricchiuto, Chief U.S. Economist at Mizuho Securities USA, had this to say on CNBC:

“…there’s also this wrong concept that I keep hearing over and over again in the financial press about this acceleration in economic growth. That isn’t happening. Last month we had a horrible retail sales number. We had a horrible durable goods number. We’re likely to have a very disappointing retail sales number coming forward. This month we’ve had a strong payroll number – we say everything’s great. It’s not great. It’s running where it’s been. It’s been the same thing for the last five years. There’s no improvement in the economy.”

On February 2, Kevin Lansing and Benjamin Pyle, two researchers in the Economic Research Department of the Federal Reserve Bank of San Francisco, produced a study depicting the FOMC as consistently rosy-eyed in its forecasts for U.S. economic growth.

FOMC projections for Gross Domestic Product (GDP) are reported in its Summary of Economic Projections (SEP). According to Lansing and Pyle, the FOMC’s SEP “(1) did not anticipate the Great Recession that started in December 2007, (2) underestimated the severity of the downturn once it began, and (3) consistently over predicted the speed of the recovery that started in June 2009. The SEP growth forecasts have typically started high, but then are revised down over time as the incoming data continue to disappoint.”

Lansing and Pyle include a chart showing that the SEP forecast for 2008 never turned negative while the “actual growth rate for 2008 turned out to be –2.8%, the largest annual decline since 1946.”

GDP growth in the first quarter of 2014 was actually negative, coming in at a stunning -2.9 percent in its final revision. That was the worst reading since 2009 during the depth of the financial crisis. For the full year of 2014, real GDP increased at 2.4 percent compared with an increase of 2.2 percent in 2013.