Why Is the Fed’s Stanley Fischer Tilting at Windmills? 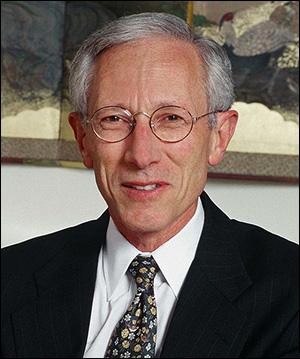 Last Friday and again yesterday, the Vice Chairman of the Federal Reserve, Stanley Fischer, delivered speeches that attempted to refocus his audience away from the systemic global risk posed by behemoth Wall Street banks and redirect their gaze to dangers lurking in the nonbank sector: things like mutual funds and hedge funds.

Reading the speeches, we had an epiphany here at Wall Street On Parade: if something does blow up in the nonbank sector it is highly likely to be caused by an interaction with a Wall Street bank. The insurance company, AIG, would not have failed during the last financial crisis had it not agreed to engage in Credit Default Swaps (CDS) with Wall Street mega banks. Fannie Mae and Freddie Mac would not have failed had they not been seduced into buying dodgy mortgages,  mortgage-backed securities, and derivatives from Wall Street banks. The Reserve Primary Fund, a money market fund that infamously broke the buck (its shares fell below the sacrosanct $1 per share) in September 2008, did so because of its holdings of Lehman Brothers’ debt – a large Wall Street investment bank which failed in September 2008 while owning two FDIC-insured banks — Lehman Brothers Bank, FSB and Lehman Brothers Commercial Bank.

Fischer’s efforts to redirect the debate away from the largest Wall Street banks comes on the heels of a February report from the Office of Financial Research, a unit of the U.S. Treasury, showing systemic problems bubbling again at the mega banks.

Fischer also appears to be ignoring the high amount of leverage at the Wall Street banks his organization, the Federal Reserve, is overseeing. In May 7 of last year, Thomas Hoenig, the Vice Chairman of the FDIC and former President of the Federal Reserve Bank of Kansas City, gave a presentation to the Boston Economic Club warning that mega banks are now “larger and more complex than they were pre-crisis.” Hoenig also noted that “The average notional value of derivatives for the three largest U.S. banking firms at year-end 2013 exceeded $60 trillion, a 30 percent increase over their level at the start of the crisis.” Raising further alarm bells, Hoenig stated that the largest banks are “excessively leveraged with ratios, on average, of nearly 22 to 1.”

During the leadup to Fischer’s Senate confirmation to serve as Vice Chairman of the Federal Reserve, Wall Street On Parade raised a multitude of questions about his ties to one of the systemic banks, Citigroup, which received the largest taxpayer bailout in the history of banking during the crash of 2008. Altogether, Citigroup received $45 billion in equity infusions, over $300 billion in asset guarantees, and over $2 trillion in secret loans from the Federal Reserve – amounts which only became public after Congressional action and a lawsuit by Bloomberg News.

In a December 20, 2001 employment agreement filed with the Securities and Exchange Commission on behalf of Citigroup, Fischer was to join the bank on February 1, 2002 as Vice Chairman of the Board with a lavish compensation package for a man who had never worked in commercial banking. Fischer’s employment agreement promised:

A guaranteed bonus of $2 million for 2002, payable in cash and restricted Citigroup stock;

A stock option grant of 75,000 shares of Citigroup common stock, subject to Board approval;

Citigroup would also place $100,000 in the super-secretive Citigroup Employee Fund of Funds I, LP which lists an address in the Cayman Islands. In addition to fronting the investment for Fischer, the “contribution will be enhanced with company-provided two to one leverage,” according to the agreement.

Wall Street On Parade was unable to determine just how much Fischer made in profits on the sale of his stock option awards but it is clear he liquidated or exchanged them because they do not show on his 2005 filing.

Fischer’s employment agreement contained the same type of clause that was revealed in the Senate confirmation hearing of Jack Lew, a former Citigroup Chief Operating Officer now serving as U.S. Treasury Secretary. If either Lew or Fischer left Citigroup for a high level position in the U.S. government or a regulatory body, the restricted money Citigroup had put away for them would be theirs to keep.

The only Senator to worry aloud about Fischer’s ties to Citigroup during his confirmation hearing was Senator Elizabeth Warren. Senator Warren told Fischer:

Fischer expressed the belief that his tenure at Citigroup would be a positive for his work at the Fed. Warren retorted:

As we reported earlier this month:

“The Fed just gave Citigroup a clean bill of health last week under its so-called rigorous stress tests and is allowing the bank to spend like a drunken sailor, raising its dividend 400 percent with permission to buy back as much as $7.8 billion of its own stock. The Fed’s qualitative portion of the stress test is said to look at both risk controls and the internal culture of the bank. Citigroup remains under multiple criminal investigations for money laundering and involvement in rigging currency markets. Apparently, in the Fed’s eyes, this is now de rigueur on Wall Street.”

The Federal Reserve didn’t see the last crisis coming and nothing that Stanley Fischer has said in the past week has raised confidence that it has removed its rose-colored glasses when it comes to Wall Street.