Radical Left Wins in Greece, Leaving the Koch Brothers in a Cold Sweat 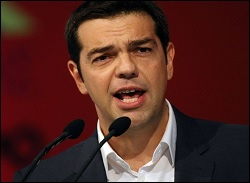 Just imagine what would happen in the United States, land of the billionaire Koch brothers’ well-heeled minions and their obsessive hysteria against the government helping those in need, if a political party called the Coalition of the Radical Left (Syriza is the Greek shorthand) took over the country in a landslide victory.

Even though it happened in Greece yesterday, not the United States, it is sure to provide plenty of fodder for the Kochs to incite fear in their ranks and ramp up campaign spending by billionaires heading into the 2016 U.S. election. Just this past Saturday, Charles Koch was warning his Ayn Rand-worshiping followers at their annual confab in Palm Springs, California that “Americans have taken an important step in slowing down the march toward collectivism.” In excerpts of his speech leaked to the media, Koch said his vision is one of a “society that maximizes peace, civility and well-being.”

The Koch brothers appear incapable of comprehending that their own ultra “well-being” and that of fellow billionaires is a wealth-stripping device that is impoverishing the rest of the country. As we previously reported, the Koch brothers’ combined wealth grew by $33 billion in a recent three-year span at a time when the U.S. Department of Education was reporting 1,065,794 homeless schoolchildren in the U.S., the highest number on record. Americans living in poverty according to the U.S. Census Bureau is 45.3 million while median income is 8 percent lower than in 2007 and only slightly above the level of 1995. Clearly, the billionaire approach to “well-being” isn’t working for the population at large.

The man who led Syriza to victory in Greece is Alexis Tsipras, a 40-year old veteran political activist. He has called what is happening in Greece a “silent humanitarian crisis” and, indeed, it is. As a result of the austerity program imposed by the terms of its bailout, Greece’s GDP has plunged 25 percent, unemployment is running at 26 percent, and almost a third of its population of 11 million is living below the poverty line.

Tsipras attracted even conservative voters by promising to renegotiate the punishing terms of the Greek bailout which many Greeks feel has stripped the country of its dignity and hope. Tsipras has promised a €2 billion program of social spending to include free electricity and food for several hundred thousand impoverished and hungry households, free medical care for the uninsured, boosting the minimum wage and rehiring public sector workers who were purged as part of the austerity program.

Those responsible for the crippling austerity are called the “troika” in Greece – the European Commission, European Central Bank and International Monetary Fund. After exit polls showed a strong win for his party, Tsipras told his supporters that “Greece is leaving behind the destructive austerity, fear and authoritarianism. It is leaving behind five years of humiliation and pain.”

It is the charisma and popularity of Tsipras that has many on both sides of the Atlantic worried about a spreading leftist movement – underpinned by the harsh realities of unprecedented wealth inequality. A report released last week by Oxfam found that the richest one percent of people in the world own 48 percent of the wealth, while the richest 20 percent own all the wealth except for 5.5 percent which must be spread across the remaining 80 percent of the people in the world.

The web site of Syriza maps out its wide-ranging goals:

“SYRIZA insists strongly on its position that it will abolish the memoranda signed with the Troika of lenders when it assumes office and will re-negotiate the loans. At the same time it will promote a programme of social and economical reconstruction, aiming at development that promotes human needs and well-being and respects nature.

“Regarding foreign policy, SYRIZA fights for a multidimensional, pro-peace foreign policy for Greece, with no involvement in wars or military plans, a policy of independence and friendly peaceful cooperation with all countries, especially our neighbours.

“Together with the European Left Party, of which it is a very active member, SYRIZA is fighting for the re-foundation of Europe away from artificial divisions and cold-war alliance such as NATO. As for the E.U., SYRIZA denounces the dominant extreme neoliberal and euro-atlantic policies and believes that they must and can be transformed radically in the direction of a democratic, social, peaceful, ecological and feminist Europe, open to a socialist and democratic future. This is why SYRIZA is in favour of cooperation and coordinated action of left forces and social movements on a pan-European scale.  However, it does not hold euro-centric views and rejects the idea of an insulate ‘fortress Europe’.”

U.S. stocks, majority-owned by the wealthy elite around the world, sold off sharply at the opening of the markets this morning.