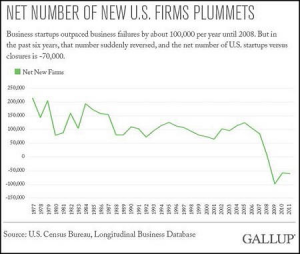 Clifton has a theory on why America’s crisis in creating new businesses is a well-kept secret. He writes:

“My hunch is that no one talks about the birth and death rates of American business because Wall Street and the White House, no matter which party occupies the latter, are two gigantic institutions of persuasion. The White House needs to keep you in the game because their political party needs your vote. Wall Street needs the stock market to boom, even if that boom is fueled by illusion.”

A key function of Wall Street is to bring promising new companies to market to ensure that the U.S. remains competitive in new industries and good jobs and innovation. This process is called Initial Public Offerings or IPOs. But the nation was put on notice as far back as 2001 that Wall Street was more snake oil salesman than the locomotive for new business launches. The largest investment banks were calling the startups they were peddling to the public on the Nasdaq stock market “dogs” and “crap” behind closed doors while lauding their virtues in publicly released “research” announcements.

“Concern has centered on the misery of small investors maimed in the tech wreckage. But what happened to all the money they squandered in the I.P.O.’s? Think of the stock market in recent years as a lunatic control tower that directed most incoming planes to a bustling, congested airport known as the New Economy while another, depressed airport, the Old Economy, stagnated with empty runways. The market has functioned as a vast, erratic mechanism for misallocating capital across America.”

At the time Chernow wrote those words, $4 trillion had been erased from the markets. At Nasdaq’s peak, set on March 10, 2000, it was at 5,048.62. Yesterday, the Nasdaq closed at 4,771.76. Our job creation engine has sputtered and backfired for a decade and a half without intervention from Congress or the White House. Wall Street investment banks are still allowed to write research reports on the same companies they are bringing to market despite the $4 trillion lesson that this is a flawed, corrupt system.

Just seven years after the Nasdaq crash, Wall Street collapsed the entire U.S. financial system and the nation’s economy. We are now entering the second leg of that economic collapse as deflation takes root in major industrialized nations around the globe, supply gluts proliferate on weak demand, and oil and industrial commodity prices collapse.

Wall Street brought us to the brink in 2008 through a corrupt system whose only function was to enrich its players at the nation’s expense. These are a few of the milestones in that journey:

Wall Street’s overarching function today is that of an institutionalized wealth transfer mechanism, propped up by compromised regulators and a dysfunctional Congress. As the PBS program Frontline reported in 2013, if your work career spans 50 years and you receive the historic return of 7 percent on stocks in your 401(k) plan, the 2 percent typical fee charged by Wall Street mutual funds will gobble up almost two-thirds of your account.

The Frontline program was called “The Retirement Gamble.” Wall Street On Parade checked the math and found this was not a gamble but a certainty: “under a 2 percent 401(k) fee structure, almost two-thirds of your working life will go toward paying obscene compensation to Wall Street; a little over one-third will benefit your family – and that’s before paying taxes on withdrawals to Uncle Sam.”

All of these examples cited above are part and parcel of why the United States has the fourth most unequal income distribution in the developed world. That income inequality, according to the Organisation for Economic Co-Operation and Development (OECD) is dampening growth prospects. The OECD found in a study released in September of 2014 that “countries where income inequality is decreasing grow faster than those with rising inequality.” The study noted that in Italy, the U.K. and the United States, “the cumulative growth rate would have been six to nine percentage points higher had income disparities not widened.”

Glass-Steagall, the Four Horsemen, and the Crippled Job Market