Wall Street On Parade holds great respect for Paul Krugman as an economist. We link regularly to his columns under our “Publisher’s Must Reads.” But every time Krugman posits on Dodd-Frank financial reform or the crash of 2008 he blunders into the quagmire created by financial reporter Andrew Ross Sorkin’s misinformation campaign in the pages of the New York Times.

Take this past Monday for example. Krugman devoted his column to the spending bill just passed by Congress that guts a key derivatives provision of the Dodd-Frank financial reform legislation, writing that “One of the goals of financial reform was to stop banks from taking big risks with depositors’ money. Why? Well, bank deposits are insured against loss, and this creates a well-known problem of ‘moral hazard’: If banks are free to gamble, they can play a game of heads we win, tails the taxpayers lose.”

So far so good.  Krugman then continues: “Dodd-Frank tried to limit this kind of moral hazard in various ways, including a rule barring insured institutions from dealing in exotic securities, the kind that played such a big role in the financial crisis. And that’s the rule that has just been rolled back.”

Again, spot on. But then Krugman steps into Andrew Ross Sorkin’s illusion of what actually happened in 2008, writing: “Now, this isn’t the death of financial reform. In fact, I’d argue that regulating insured banks is something of a sideshow, since the 2008 crisis was brought on mainly by uninsured institutions like Lehman Brothers and A.I.G.”

Regulating insured banks is a sideshow? Nobel laureates can’t go around saying things like that for very long before their academic colleagues start to roll their eyes and the Nobel folks start to wonder if there’s some way to rescind the prize.

Serious financial reform isn’t about regulating any ole insured banks. It’s about regulating some of the largest banks that have ever existed in history, such as JPMorgan Chase, Wells Fargo, Bank of America, and Citigroup. There are 6,546 FDIC insured banks in the U.S. but as of the second quarter of this year, just these four banks held almost $4.5 trillion in deposits, representing 45 percent of all bank deposits, according to data from the Office of the Comptroller of the Currency (OCC).

And while holding the life savings of moms and pops across America, backstopped with insurance guaranteed by the taxpayer, these four banks are simultaneously holding $171 trillion in derivatives or 72 percent of all derivatives held at all 6,546 FDIC insured banks, according to 2014 second quarter data from the OCC. If you add in Goldman Sachs’ insured, deposit-taking bank, Goldman Sachs Bank USA (yes, Goldman Sachs is allowed to own an FDIC insured bank under the miracle of financial “reform”) which is holding $53 trillion in derivatives against a meager $109.5 billion in assets, these five institutions control 95 percent of all bank derivatives at FDIC insured institutions.

The report issued by the Financial Crisis Inquiry Commission (FCIC) on the 2008 collapse explained the problem as follows: “Among U.S. bank holding companies, 97% of the notional amount of OTC derivatives, millions of contracts, were traded by just five large institutions (in 2008, JPMorgan Chase, Citigroup, Bank of America, Wachovia, and HSBC)…”

Each of those institutions in 2008 was an FDIC insured bank. Wachovia would be absorbed during the crash by Wells Fargo. The FCIC report goes on:

“When the nation’s biggest financial institutions were teetering on the edge of fail- ure in 2008, everyone watched the derivatives markets. What were the institutions’ holdings? Who were the counterparties? How would they fare? Market participants and regulators would find themselves straining to understand an unknown battlefield shaped by unseen exposures and interconnections as they fought to keep the financial system from collapsing.”

The largest insured bank when the crisis first got underway in 2007 was Citigroup and its role in the crash was pivotal according to the FCIC report. News headlines of 2008 confirm that Citigroup’s year long death spiral drained confidence in the stability of the U.S. financial system.

Here’s a sampling of the Citigroup headlines in timeline order:

April 20, 2008, New York Times: “Citigroup Records a Loss and Plans 9000 Layoffs,” explaining that the bank reported a $5.1 billion loss and would have to slash jobs.

June 26, 2008, Wall Street Journal: “Citigroup: Worth Less and Less Every Day,” sharing the scary news that the stock was worth one-third of where it had been at its 52-week high.

On July 14, 2008, Bloomberg News reported that in addition to holding $2.2 trillion in assets on its balance sheet, Citigroup has $1.1 trillion of “mysterious” assets off its balance sheet, including “trusts to sell mortgage-backed securities, financing vehicles to issue short-term debt and collateralized debt obligations, or CDOs, to repackage bonds.”

All of these headlines occurred months before Lehman Brothers collapsed and AIG was taken over by the U.S. government. Those events occurred on September 16, 2008. But according to the OCC, Citigroup’s financial troubles began in earnest in 2007. The FCIC also notes further: “More than other banks, Citigroup held assets off of its balance sheet, in part to hold down capital requirements. In 2007, even after bringing $80 billion worth of assets on balance sheet, substantial assets remained off. If those had been included, leverage in 2007 would have been 48:1…”

At the height of Citigroup’s troubles, its shares traded at 99 cents — what had been the country’s biggest bank was now a penny stock.

All of these details are critically important to the well-being of this country because they present a siren call for the reestablishment of the Glass-Steagall Act, separating casino banks from those holding insured deposits.

It also explains why there is outrage among Senators (who have their facts straight) that Citigroup has actually been allowed to write its own legislation and repeal the derivatives provision of Dodd-Frank that would have forced these trillions of dollars of risky derivatives out of the insured banks. 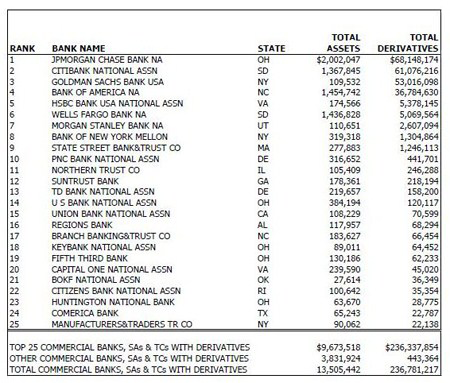 OCC Chart Showing Notional Amount of Derivatives at Banks as of June 30, 2014. (Figures in Millions)