There has been much focus on the fiery speeches that Senator Elizabeth Warren delivered from the Senate floor in an effort to stop the roll-back of a key derivatives provision of the Dodd-Frank financial reform legislation that was slipped into the giant $1.1 trillion spending bill that was signed into law this week by President Obama – who campaigned for passage of the bill despite the weakening of protections against Wall Street abuses. The bill became known as the Cromnibus because it is part Continuing Resolution and part Omnibus spending bill to fund the government through September of 2015. Those who voted against the bill in the Senate are provided here; in the House, here.

But Warren was far from alone in expressing outrage at Citigroup writing most of the provision  that was quietly slipped into a spending bill that was critical to pass to avoid a government shutdown. Members of both the House and Senate, from broadly diverse political leanings, not only spoke out against the provision but voted against the spending bill to back up that outrage.

We’ll get to the still festering outrage among members of Congress in a moment, but first a warning for the next member of Congress who might be asked by a slick Wall Street bank lobbyist to try a similar maneuver. The House Rep who slipped the provision into the spending bill, which was effectively written by Citigroup according to Mother Jones and the New York Times, is Kevin Yoder of Kansas.

Yoder is now being viciously assailed on his own Facebook page and held up to public ridicule in Kansas newspapers. On Facebook, a woman identifying herself as Amy Hanks calls Yoder the “lowest of the low” and adds: “Hope you burn in hell.” Another woman calls Yoder “one greedy immoral coward.” OpenSecrets.org shows “Securities and Investment” as the number one industry contributing to Yoder’s campaign committee and leadership PAC. 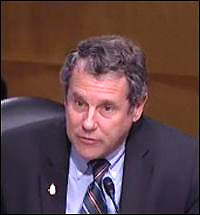 Citigroup received the largest taxpayer bailout in history during the financial crisis as a result of its unchecked derivatives: $45 billion in TARP funds; over $306 billion in asset guarantees; and more than $2 trillion in low-cost loans from the Fed according to the General Accountability Office. The abject repulsion that the very bank that got the biggest handout and played a pivotal role in collapsing the economy should now be gaming Congress to repeal financial protections drew a joint letter of protest from Republican Senator David Vitter of Louisiana and Democratic Senator Sherrod Brown of Ohio. (See Senators Sherrod Brown and David Vitter Ask House to Remove Citigroup Provision on Derivatives from Cromnibus for full text of letter.)

In a separate statement, Brown said: “This giveaway to Wall Street would open the door to future bailouts funded by American taxpayers. It’s been just six years since risky financial practices put our economy on the brink of collapse and cost millions of Americans lost jobs, homes, and retirement savings. This provision, originally written by lobbyists, has no place in a must-pass spending bill.”

Vitter added: “Ending too big to fail is far from over. Before Congress starts handing out Christmas presents to the megabanks and Wall Street, we need to be smart about this. Removing these risky derivatives that aren’t even necessary for normal banking purposes is important, and Members of Congress need to rethink repealing this critical provision.” 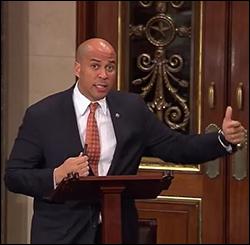 One Senator who appeared as visibly outraged as Senator Warren was Cory Booker, Democrat from New Jersey. (See video here.) Booker said what Wall Street had done to the country during the crash was “cataclysmic” and said any “changes to financial regulations should be done in a much more transparent process” and not through a must-pass omnibus spending bill. He said he was “outraged” and “frustrated.”

Senator Charles Grassley, a Republican member of the Senate Finance Committee who has observed Wall Street’s serial ability to game the system, voted against the bill and issued the following statement: “This bill continued a bad pattern the Senate has fallen into in recent years under the current leadership. Instead of hastily considering a 1,600-page, $1.1 trillion spending bill, we need to return to considering annual appropriations bills. So much spending deserves debate, consideration and an open, transparent amendment process…A poor process leads to bad policy, like scaling back banking derivatives laws without debate or accountability.  It also leads to the distrust the American people have in their government…”

Perhaps no one in Congress better understands the intense danger that the roll-back of this provision creates than Senator Carl Levin, retiring Chair of the Senate’s Subcommittee on Permanent Investigations. Senator Levin’s Subcommittee conducted a comprehensive investigation into JPMorgan’s use of Federally-insured deposits at its banking unit, Chase Bank, to gamble in exotic derivatives and lose $6.2 billion in 2012 – just four years after the Wall Street collapse. The CEO of the company, Jamie Dimon, has kept his job despite an endless series of scandals and $29 billion in settlements and fines. According to numerous media reports, Dimon made calls to members of Congress urging the passage of this bill. 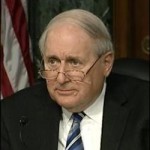 Senator Carl Levin released a statement saying: “Less than 14 years ago, the seeds of our financial crisis were planted in a derivatives provision planted in the 2001 appropriations bill. This provision, which like the provision in the bill before us, was added at the last minute and not subject to debate on its own, exempted derivatives from regulatory scrutiny, and left regulators, banks, and the American public on the hook when risky bets went bad…Now we risk repeating the same mistake of 2001. The language of the provision was written — literally written — by lobbyists for the big banks…The Senate has long operated under rules that prevent legislative changes from being made on an appropriations bill. This provision runs completely against that longstanding precedent.”

Senator Jeff Merkley, Democrat from Oregon, said he voted no “because of my deep opposition to a provision that puts the Wall Street Casino back in business.” 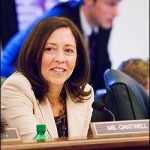 Senator Maria Cantwell, Democrat from Washington State, said she voted against the passage because it “would overturn a critical component of our work on the 2010 Wall Street reform legislation.” In 2013, Cantwell, together with Senator Elizabeth Warren, Senator John McCain and Senator Angus King introduced the 21st Century Glass-Steagall Act which would reinstate the law separating insured banks from Wall Street’s trading, derivatives and stock underwriting businesses.

Connecticut Democrat, Senator Richard Blumenthal, voted against the bill and released a statement saying that it included “massive special interest giveaways rolling back taxpayer protections against risky financial maneuvers by banks, reversing transportation safety rules, undercutting pension rights, and opening huge loopholes for billionaires to increase their influence on political campaigns and candidates. That is why I voted against this flawed measure poisoned by special favors flagrantly contrary to the public interest.”

Also voting against the bill was West Virginia Democrat, Senator Joe Manchin, who issued a statement urging his colleagues to stay in session for an additional week to draft a bipartisan bill that would fairly represent American values. In addition to calling out the Wall Street giveaway, Manchin took aim at the increase in campaign spending for the wealthy, stating: “The current limit of $32,400 was already too high for most West Virginians and Americans to be able to take full advantage. The new limit of $324,000 is inconceivable for the vast majority of Americans. That means that our political process will only be available to a small number of wealthy individuals who will have more influence on our government than the hard-working Americans we are sent here to represent.”