A Citigroup Banker Dies – Along With Responsible Press Reporting

Depending on where and when you got your news yesterday on the tragic death of Shawn D. Miller, a Managing Director of Wall Street mega bank, Citigroup, you were either emphatically told he died of a suicide or you were led to believe he was murdered. By late evening yesterday, the story had disintegrated into wild speculation. The New York Daily News ran this stunning headline, based on anonymous sources, at 9:22 p.m.: “Banker, 42, slashed his own throat in Manhattan bathtub during drug- and booze-filled bender: sources.”

It is becoming abundantly clear that if you work for a major Wall Street firm and die a sudden death, it will be shaped, molded, twisted and contorted until it fits with the suicide narrative – no matter how strongly the facts argue otherwise. 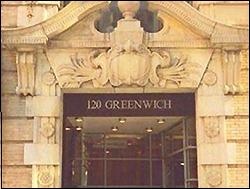 Building Where Shawn D. Miller Died in the Financial District of Manhattan

This is what we can reliably report this morning: Police were called to the scene at 120 Greenwich Street at 3:11 p.m. on Tuesday, November 18, a trendy, upscale area of Tribeca in Lower Manhattan. A friend of Miller’s had become concerned when he could not reach him by phone and called the doorman of the building to ask him to check on him. The doorman found Miller in the tub of his bathroom with knife lacerations to the throat and arms and called the police. EMS responders declared Miller dead at the scene.

All of this occurred on Tuesday afternoon, giving the New York Post plenty of time to check and double check their facts with the New York Police Department. In an on line post at the New York Post web site at 6:30 a.m. yesterday – Wednesday, the day after the death – the New York Post ran the following bold headline: “Banker found dead with throat slit in apparent suicide: cops.” That article reported that the police believed it was a suicide because “a knife was found under his body, sources said.”

But at 3:14 p.m. yesterday, the international wire service, Reuters, reported that “no weapon was found.”

At 4:05 p.m. yesterday, the New York Post ran a new headline: “Hunt on for man last seen with dead Citigroup exec.” This article states that “Police have not yet found the weapon used to cut Miller’s throat,” confirming what was reported by Reuters less than an hour earlier.

But then came the outrageous headline at the New York Daily News at 9:22 p.m. last evening, based on unnamed sources, suggesting that Miller had gone on a drug- and booze-filled bender and killed himself. The newspaper reported: “When crime scene investigators moved Miller’s body, they discovered a knife under him, leading them to believe he slashed his own throat and collapsed into the tub on top of the weapon, sources said.”

The wild and contradictory reporting instantly reminded us of how the London dailies had reported on the tragic death of JPMorgan Vice President, Gabriel Magee, in January of this year. Magee’s body was found in a pool of blood on a ninth floor landing of JPMorgan’s European headquarters building in London.

The London Evening Standard tweeted: “Bankers watch JP Morgan IT exec fall to his death from roof of London HQ,” which linked to their article declaring that “A man plunged to his death from a Canary Wharf tower in front of thousands of horrified commuters today.”

The London Evening Standard’s reporting was flatly contradicted by the Sunday Times, which reported that “Gabriel Magee’s body lay for several hours before it was found at 8am last Tuesday.”

No single witness was ever identified by the police to say they had observed Magee plunging from the top of the building. The ninth floor landing was accessible from an inside stairway of the building, meaning his body could have arrived there through means other than a fall.

Both Citigroup and JPMorgan have paid billions of dollars to settle fraud charges by regulators. Both are also under investigation by the U.S. Justice Department. In addition, both banks hold life insurance on many of their employees. When an employee dies, the death benefit is paid to the corporation tax free.

The practice is called Bank-Owned Life Insurance (BOLI). Just four of Wall Street’s largest banks (JPMorgan, Bank of America, Wells Fargo and Citigroup) hold a total of $68.1 billion in Bank-Owned Life Insurance assets according to their regulatory filings. According to Michael Myers, an expert on BOLI, those assets could potentially mean that just these four banks are holding $681 billion in face amount of life insurance on their workers, or possibly even more. 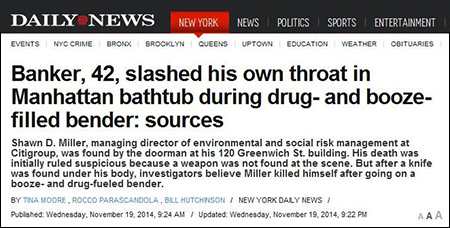 Profiteering on Banker Deaths: Regulator Says Public Has No Right to Details