Lawsuit Stunner: Half of Futures Trades in Chicago Are Illegal Wash Trades 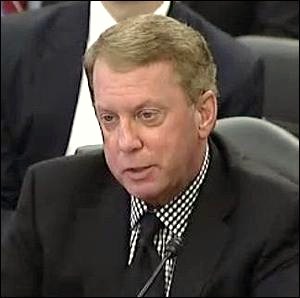 Terrence Duffy of the CME Group Testifying Before the Senate on May 13, 2014

Since March 30 of this year when bestselling author, Michael Lewis, appeared on 60 Minutes to explain the findings of his latest book, Flash Boys, as “stock market’s rigged,” America has been learning some very uncomfortable truths about the tilted playing field against the public stock investor.

Throughout this time, no one has been more adamant than Terrence (Terry) Duffy, the Executive Chairman and President of the CME Group, which operates the largest futures exchange in the world in Chicago, that the charges made by Lewis about the stock market have nothing to do with his market. The futures markets are pristine, according to testimony Duffy gave before the U.S. Senate Agriculture Committee on May 13.

On Tuesday of this week, Duffy’s credibility and the honesty of the futures exchanges he runs came into serious question when lawyers for three traders filed a Second Amended Complaint in Federal Court against Duffy, the Chicago Mercantile Exchange, the Chicago Board of Trade and other individuals involved in leadership roles at the CME Group.

The conduct alleged in the lawsuit, backed by very specific examples, reads more like an organized crime rap sheet than the conduct of what is thought by the public to be a highly regulated futures exchange in the U.S.

The lawyers for the traders begin, correctly, by informing the court of the “vital public function” that is supposed to be played by these exchanges in “providing price discovery and risk transfer.” They then methodically show how that public purpose has been disfigured beyond recognition through secret deals and “clandestine” side agreements made with the knowledge of Duffy and his management team.

The most stunning allegation in the lawsuit is that an estimated 50 percent of all trading on the Chicago Mercantile Exchange is derived from illegal wash trades.

Wash trades were a practice by the Wall Street pool operators that rigged the late 1920s stock market, leading to the great stock market crash from 1929 through 1932 and the Great Depression. Wash trades occur when the same beneficial owner is both the buyer and the seller.  Wash trades are banned under United States law because they can falsely suggest volume and price movement.

The lawsuit says Duffy and his management team are tolerating wash trades “because they comprise by some estimates fifty percent of the Exchange Defendants’ total trading volume and also because HFT transactions account for up to thirty percent of the CME Group’s revenue.”

The complaint indicates that the plaintiffs have a “Confidential Witness A,” a high frequency trader, who has given them a statement that wash trades are used by high frequency traders as part of a regular strategy to detect market direction and “to exit adverse trades when the market goes against their positions.”

The strategy works like this, according to the complaint:

“HFTs [high frequency traders] continuously place small bids and offers (called bait) at the back of order queues to gain directional clues.  If the bait orders are hit, the algorithm will place follow-up orders to either accumulate favorable positions or exit ‘toxic’ risks, a process which leverages bait orders to gain valuable directional clues as to which way the market will likely move.  The initial bait orders are very small while subsequent orders, once market direction has been identified, are very large.  A portion of the large orders that follow the smaller bait orders are wash trades.”

Another very serious charge is that some of the defendants in the lawsuit who are in leadership roles in management at the futures exchanges, have “equity interests” in the very high frequency trading firms that are benefitting from these wash trades. The complaint states:

“The Exchange Defendants profit from the occurrence of wash trades and have a vested interest in not having more robust safeguards against them because they contribute significantly to the Exchange Defendants’ volume numbers and revenue.  Were the volume of wash trades excluded from the Exchange Defendants’ volume and revenue numbers, the radically reduced volume numbers would exert adverse pressure on the CME Group’s stock price, not to mention the revenue to members of CME Group’s governance who have equity interests in participating HFTs in addition to stock ownership in the CME Group, Inc.”

In addition to wash trades, the lawsuit charges that the CME Group has entered into “clandestine” incentive agreements.

The complaint identifies another “Confidential Witness B” who has provided information on “the existence of a clandestine rebate agreement between the CME and a very large volume HFT firm that trades in the S&P500 E-Mini contract.” That’s a stunning allegation since the S&P500 E-Mini was thought to be one of the most liquid contracts in the U.S. The complaint correctly notes that “there can be no economically justified reason, such as to develop thinly traded markets, that would justify the CME and CME Group to maintain clandestine incentive agreements in this particular market, other than the improper intent.”

Another trick to get an early peek at trading information is referred to in the complaint as the “Latency Loophole,” which “allows certain market participants to know that orders they entered were executed and at what price, and to enter many subsequent orders, all before the rest of the market participants found out the status of their own initial orders.”

The complaint explains that the ability to continuously enter orders and get trade confirmations “of the price at which these orders are filled, before the rest of the public even knows about the executed trades,” empowers high frequency traders with “a massive informational and time advantage in discerning actual price, market direction and order flow before anyone else.”

By providing just a select group of market participants and high frequency traders with this “sneak peek” advantage, says the complaint, the defendants engaged in a “fraud on the marketplace.”

The Justice Department and FBI have opened investigations into high frequency trading. Let’s hope that includes both stock and futures exchanges.

The traders bringing the lawsuit, which is filed as a class action, are William Charles Braman, Mark Mendelson and John Simms. Lawyers for the plaintiffs are R. Tamara de Silva, who maintains a private practice, and lawyers from O’Rourke & Moody.

The suit was filed in the U.S. District Court for the Northern District of Illinois. The Civil Docket for the case is #: 1:14-cv-02646 and has been assigned to Judge Charles P. Kocoras. The CME Group is represented by the law firm Skadden, Arps, Slate, Meagher & Flom, LLP.