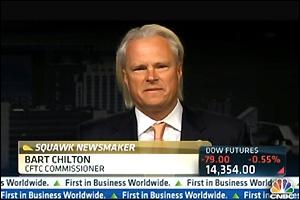 Wash sales – one of the most virulent forms of stock manipulation that bankrupted banks and corporate conglomerates in the Great Depression and intensified the stock market crash of 1929 to 1932 – has reached scandalous proportions in today’s markets. The response from regulators? Gut the rules that make it a crime.

On March 18 of last year, Bart Chilton, then a Commissioner at the Commodity Futures Trading Commission (CFTC), stunned CNBC viewers with the announcement that wash sales were rampant in the futures markets. Speaking to Squawk Box host, Joe Kernen, Chilton stated:

“Well these wash sales, Joe, people know they’re illegal; they’re not allowed. A wash sale is when somebody trades with themselves. But what we’ve discovered is that they are going on at this large, voluminous level. I mean, to me, a shocking level. And they’re impacting what people see as volume. So this is an area that we’re going to review to ensure that markets are operating efficiently and effectively. Who knows what sort of impact they’re having. And it raises a host of policy questions that we have out there, because this stuff just shouldn’t be allowed.”

Volume is hardly the only problem with wash sales: the age old tactic of a wash sale is to pump a stock’s price so insiders can bail out at the top and transfer the losses of a worthless or inflated security to uninformed investors. This is done by the same party conducting or authorizing simultaneous buying and selling in the stock, typically making sure trades occur at ever rising prices until the operators have unloaded their stock. Without that support, the price crashes.

Laws making it illegal for one party to be on both the buy and sell sides of a stock transaction were implemented during the legislative reforms of Wall Street in the 1930s. They have had legal certainty for the past 80 years until this May 1 when Wall Street’s coddling, captured regulators, the Securities and Exchange Commission and the Financial Industry Regulatory Authority (FINRA), gutted the wash sale rules beyond recognition – even changing the name of the illegal practice from “wash sale” to the benign “self trade.”

The CME Group, which runs the Chicago Mercantile Exchange, the largest futures market in the world, similarly gutted its rule language in June of last year, writing: “The Advisory Notice clarifies that orders entered by different traders making fully independent trading decisions that unintentionally and coincidentally match opposite each other on the electronic platform will not be deemed a wash trade provided that the orders are entered in good faith for the purpose of executing bona fide transactions, are not prearranged and that each trader enters their order without knowledge of the other trader’s order.” (This while regulators on multiple continents are charging cartels of traders with rigging everything from Libor to metals to currency markets and chat room transcripts show the casualness with which traders rig with abandon.)

With the gutting of the clear intention of the law, today a Citigroup stock trading operation could be on both the buy and sell side of a trade just as long as the buy happens on one trading desk and the sell happens on a different trading desk within Citigroup. This would render the transaction “bona fide” under this perverted logic – which makes the leap that computer algorithms on separate trading desks can’t be programmed to rig markets with wash sales.

This is an excerpt from the SEC’s approval of the gutted rule submitted by FINRA:

“The proposed rule change requires FINRA members to have policies and procedures in place that are reasonably designed to review their trading activity for, and prevent, a pattern or practice of self-trades resulting from orders originating from a single algorithm or trading desk, or from related algorithms or trading desks.  Additionally, the proposed rule change states that transactions resulting from orders that originate from unrelated algorithms or from separate and distinct trading strategies within the same firm would generally be considered bona fide self-trades.”

Following the 1929 stock market crash, which over the next 30 months erased 90 percent of the stock market’s value, the U.S. Senate Committee on Banking and Currency launched an exhaustive investigation into the manipulative devices and looting operations of Wall Street’s biggest names. The Committee was smart enough then to realize that it would have to exhaustively examine the structure of the market, not just the conduct of individual actors, to understand how an institutionalized wealth transfer system had been carried out. The tactic of wash sales to rig stock prices was repeatedly uncovered by the Senate investigation. One of the biggest cases on which the Committee spent days was the Samuel Insull wash sales.

In 1934 the Associated Press introduced to the American public the financial nightmare that can ensue from wash sales. Samuel Insull had built an electric utility conglomerate using a holding company structure that disguised mushrooming debts. Insull kept the scheme going by artificially inflating the conglomerate’s publicly traded stock through more than a million wash sales.

On October 20, 1934, The Associated Press explained the “wash sale” allegations against Insull: “Prosecutors closed the third week of their case against Samuel Insull, Sr. today with testimony that ‘wash sales’ helped make the ‘jewels of the Insull empire’ sparkle for investors.”

The next day, on October 21, 1934, the Milwaukee Journal reported that through his own investment company, the Corporation Securities Company, prosecutors charged Insull with conducting 1,049,624 trades in his own stock out of total market trades of 1,695,450 that occurred from April 30, 1930 to January 12, 1932. When the Insull house of cards collapsed in 1932, investors in its stocks and bonds across America were wiped out, losing hundreds of millions of dollars.

Insull fled to Europe to beat an indictment but was eventually captured and returned by authorities. Despite overwhelming evidence of payoffs and market rigging, Insull was acquitted at trial.

The 1930s Senate investigation was initiated less than three years after the 1929 crash. The 2008 crash occurred six years ago and yet, today, no such intense investigation of market structure has been undertaken by Congress. What we have seen instead are isolated hearings, most of which are devoid of oath-taking or subpoenas. Only a small handful of Senators even care enough to show up for the Senate Banking hearings. (The Senate Permanent Subcommittee on Investigations, of course, has done a herculean job in its Wall Street investigations but its plate is simply too full. The Senate Banking Committee has failed to pull its weight.)

Eighty years of sound, prudent securities law has now been wiped out as Congress seems to muddle about in a daze. The pool operators of the 1930s have been reincarnated today in the form of Wall Street’s dark pools. The protections of the depression-era Glass-Steagall Act which barred the Wall Street speculators from getting ownership of insured deposit banks to gamble in stocks and derivatives – wiped away with the passage of the Gramm-Leach-Bliley Act in 1999.  Now rampant wash sales have been given a less onerous name and a green light by the top securities cop – a cop that today is staffed with Wall Street’s favorite former lawyers.

Wall Street’s technology gurus can create artificial intelligence programs that can trade in microseconds. Wall Street certainly has the capability of creating wash blockers that would prevent all wash trades from occurring. The coddling regulators had no need to gut the rules other than to once again show their fealty to their pals on Wall Street.