Documents Emerge in Senate Hearing from William Broeksmit, Deutsche Exec Alleged to Have Hanged Himself in January 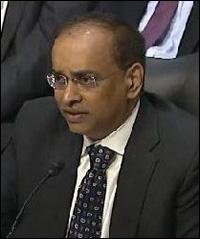 Anshu Jain, Co-CEO of Deutsche Bank, was not having a good day yesterday. First the oath-taking, subpoena-issuing Senate Permanent Subcommittee on Investigations released a detailed email to him from William Broeksmit, the 58-year old former Deutsche risk executive alleged to have hanged himself in his London home on January 26. By the end of the day, someone had leaked to the Wall Street Journal a deeply critical letter of Deutsche Bank from the New York Fed which said that “The size and breadth of errors strongly suggest that the firm’s entire U.S. regulatory reporting structure requires wide-ranging remedial action.”

What the U.S. Senate’s Permanent Subcommittee on Investigations was taking testimony on yesterday, however, was far from an “error” committed by Deutsche Bank. Both Deutsche Bank and Barclays were shown, through emails, marketing materials and witness testimony, to have set up elaborate schemes to effectively loan out their balance sheet to hedge funds to conduct billions of trades each year in trading accounts under the bank’s name, deploying massive leverage that is illegal in a regular Prime Brokerage account for a hedge fund client.

The banks got paid through margin interest, fees for stock loans for short sales, and trade executions. The hedge funds got paid not only from trading profits but also through a tricked up “basket option” offered by the banks that magically turned millions of short-term trades into long-term capital gains, saving the hedge funds about half the rate of taxes owed on the short-term trades, some of which lasted only minutes.

One hedge fund, Renaissance Technologies, was said by Senator John McCain to have ripped off the U.S. taxpayer to the tune of $6 billion in unpaid taxes on long-term capital gains.

Broeksmit’s name first emerged in yesterday’s Senate hearing as Senator Carl Levin, Chair of the Subcommittee, was questioning Satish Ramakrishna, the Global Head of Risk and Pricing for Global Prime Finance at Deutsche Bank Securities in New York. Ramakrishna was downplaying his knowledge of conversations about how the scheme was about changing short term gains into long term gains, denying that he had been privy to any conversations on the matter.

Another exhibit released by Levin was an August 25, 2009 email from William Broeksmit to Anshu Jain, with a cc to Ramakrishna, where Broeksmit went into copious detail on exactly what the scheme, internally called MAPS, made possible for the bank and for its client, the Renaissance Technologies hedge fund. (See Email from William Broeksmit to Anshu Jain, Released by the U.S. Senate Permanent Subcommittee on Investigations.)

At one point in the two-page email, Broeksmit reveals the massive risk the bank is taking on, writing: “Size of portfolio tends to be between $8 and $12 billion long and same amount of short. Maximum allowed usage is $16 billion x $16 billion, though this has never been approached.”

Broeksmit goes on to say that most of Deutsche’s money from the scheme “is actually made by lending them specials that we have on inventory and they pay far above the regular rates for that.”

Broeksmit’s death was the subject of a coroner’s inquest in March in London. The coroner ruled the death to be a suicide. A personal doctor’s report read at the inquest indicated he had been “anxious” about ongoing investigations of the bank. He had retired from Deutsche Bank in February 2013 after a German regulator had given his name a thumbs down to be the head of risk management for Deutsche.

The day after Broeksmit’s body was discovered, Eric Ben-Artzi, a former risk analyst turned whistleblower at Deutsche Bank, spoke at Auburn University in Alabama on his allegations that Deutsche had hid $12 billion in losses during the financial crisis with the knowledge of senior executives. Ben-Artzi said the bank effectively invented assets and hid losses.