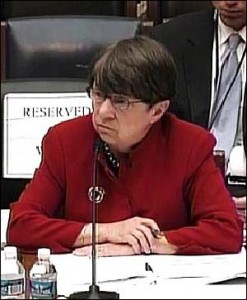 The scene in the House Financial Services Committee hearing yesterday was surreal. After Mary Jo White bluntly told the panel that “The markets are not rigged,” (countering heavily publicized charges made by bestselling author Michael Lewis in his new book, “Flash Boys,” as well as a host of key market participants) members of Congress continued to ask about specific forms of market rigging that they know to be happening. While White refused to acknowledge that this obvious wrongdoing was occurring on her watch, she insisted repeatedly that these various non-problems were, nonetheless, being studied. Congressman David Scott from Georgia told White he sensed a lack of urgency on her part.

The remarks from Congressman Michael Capuano of Massachusetts were particularly heated and generally reflected the frustration with White’s responses from a large part of the Committee. Capuano said:

“Six years ago we had a humongous financial crisis — greatest in my lifetime, hopefully the last in my lifetime, we’ll see. Five years ago we passed a significant law to try to address some of the things that caused that crisis. Three years ago the SEC passed some proposed regulations, adopted proposed regulations, relative to credit rating agencies that came out of that Dodd-Frank bill – three years later those rules are still not finalized.

“A few years ago Supreme Court made a ruling that corporations are people and they can spend money any where they want…many of us asked the SEC to address that issue — to simply require corporations who make political donations to simply publicize them — and the SEC has now taken a walk on that request after several years of being asked.

“Recently you had one of your long term attorneys, who I understand is well respected within the agency, retire. At his retirement party, he basically criticized the SEC’s approach over the last several years as being too timid relative to enforcement actions against some of the biggest names on Wall Street, therefore leading to an attitude on Wall Street that what’s the big deal, we can get away with it; maybe pay a small fine relative to the rewards we reap.

“And now recently we’ve had a book that’s come out by a well respected author, whether you agree with all the details or not, certainly raises questions, serious questions, as to whether the whole market is rigged against especially small investors…After all these things — that the SEC really hasn’t done much about.” 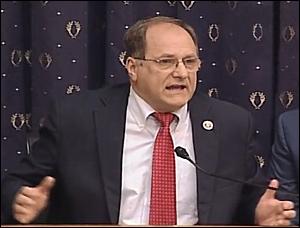 Congressman Capuano concluded by saying that there is a “seeming constant erosion of confidence in the SEC to actually do the job, the main job, it’s required to do” which is to instill confidence that there is a level playing field and an honest and free market.

White gave the surreal response, without providing any evidentiary support, that despite the perception, technology has benefitted the retail investor.

White’s biggest credibility problem is that the SEC, prior to her tenure as Chair, brought an enforcement action on September 14, 2012, outlining in very specific detail (see graph below from the SEC) how the New York Stock Exchange had rigged the market by providing a faster data feed of stock prices to some of its proprietary customers to the detriment of regular investors who were getting a slower data feed since June of 2008 – a four year period of a rigged market. The SEC fined the New York Stock Exchange a paltry $5 million and ordered it to hire a consultant to investigate the problem.

The SEC said in its enforcement action:

“Rule 603(a) of Regulation NMS— requires that exchanges distribute market data on terms that are ‘fair and reasonable’ and ‘not unreasonably discriminatory.’ This rule prohibits an exchange from releasing data relating to quotes and trades to its customers through proprietary feeds before it sends its quotes and trade reports for inclusion in the consolidated feeds…

“The disparities in data transmissions that Rule 603(a) prohibits can have important consequences that risk undermining investor confidence and interfering with the efficiency of the markets.  For example, a delay in the release of data to the consolidated feeds in contrast to the proprietary feeds can cause an investor relying on the consolidated feeds to make a trading decision based on a potentially stale picture of current market conditions.”

The SEC explained in its enforcement action that stock exchanges are held to a higher standard than other market participants because they also function as self-regulatory agencies. The SEC wrote: “National securities exchanges, such as NYSE, are critical elements of the national market system.  Because of this central role, an exchange is required to satisfy among the most significant regulatory responsibilities of any market participant. These regulatory responsibilities implicate both an exchange’s own operations and its role as a self-regulatory organization that acts as a co-regulator with the Commission and other authorities.”

The Securities and Exchange Commission not only knows this is going on but is actually filing the rule changes for the practice. On December 24 of last year, the SEC filed this rule change in the Federal Register, announcing that the New York Stock Exchange was changing its pricing for some of its co-location services and computer cabinets for outside users.

The Federal Register notice also documents that the NASDAQ stock market is also providing co-location services to high frequency traders: “The Exchange also believes that the Cabinet Upgrade fee is reasonable because it would function similar to the NASDAQ charges for comparable services. In particular, NASDAQ charges a premium initial installation fee of $7,000 for a ‘Super High Density Cabinet’ (between 10 kWs and 17.3 kWs) compared to $3,500 for other types of cabinets with less power.The Exchange charges only one flat rate for its initial cabinet fees ($5,000), regardless of the amount of power allocation.”

Faster data feeds and co-location of computers are only a small part of the arsenal high frequency traders and dark pools are using to rig the stock markets. As books and academic studies have outlined in great detail, market manipulators are also using direct access to business news feeds carrying market moving company and economic reports, exotic order types, specially routed fiber optic cable lines, artificial intelligence algorithms and a host of other devices to front run the trades of ordinary investors as well as those of pensions and 401(k) funds.

If Mary Joe White is genuinely concerned about the reputation of the SEC, she’ll give some straight answers in her next appearance on Capitol Hill. 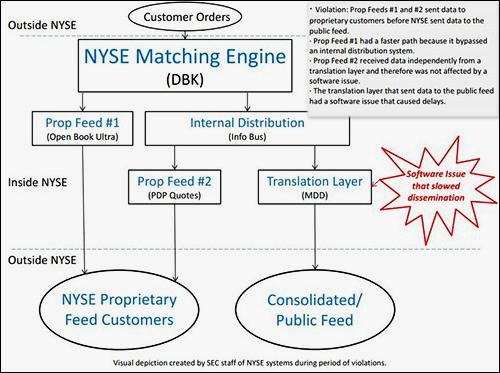