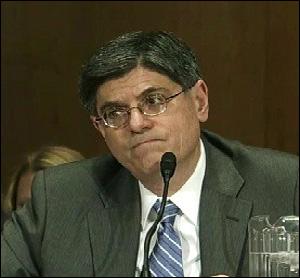 U.S. Treasury Secretary Jack Lew, whose loan dealings with New York University and acceptance of $940,000 in bonus money from taxpayer bailout funds paid to the insolvent Citigroup in early 2009 rendered him a scandalous choice for the high treasury post in the Obama administration, is fully living up to his past reputation.

Last Thursday, May 2, the U.S. Treasury released its “Daily Treasury Guidance” which lets the public know what the U.S. Treasury Secretary will be doing each day on behalf of the taxpayer who is paying his salary and on whose behalf he is supposed to be working.

The guidance for last Thursday noted that Secretary Lew would be departing Washington for New York in the afternoon “where he will attend a roundtable with business leaders hosted by the Council on Foreign Relations (CFR) to discuss the state of the U.S. and global economies. This meeting is closed press.”

The words “closed press” together with the words Jack Lew and New York apparently caused curiosity at the international wire service, Reuters. The media outlet learned that Lew would be having dinner with Jamie Dimon, Chairman and CEO of JPMorgan Chase, along with an assortment of hedge fund kingpins.

Dimon is in serious hot water with his regulators. The firm that he heads has incurred over $16 billion in legal expenses over the past three years attempting to ward off lawsuits and investigations covering a breathtaking sweep of alleged wrongdoing.  The London Whale debacle, where a unit of the bank gambled away over $6 billion of depositors’ money in London, has received the most press but it is just one speck of the whale of a mess at JPMorgan.

Also sitting down to break bread with Lew last Thursday evening was hedge fund billionaire John Paulson, according to Reuters. John Paulson is the hedge fund manager who made over $1 billion betting against (shorting) a Goldman Sachs investment called Abacus 2007-AC1 – a deal he helped Goldman structure to fail — while investors in the deal lost the same amount.  According to the Securities and Exchange Commission:

“Undisclosed in the marketing materials and unbeknownst to investors, a large hedge fund, Paulson & Co. Inc. (‘Paulson’), with economic interests directly adverse to investors in the ABACUS 2007-AC1 CDO, played a significant role in the portfolio selection process. After participating in the selection of the reference portfolio, Paulson effectively shorted the [Residential Mortgage Backed Securities] portfolio it helped select by entering into credit default swaps (‘CDS’) with [Goldman] to buy protection on specific layers of the ABACUS 2007-AC1 capital structure. Given its financial short interest, Paulson had an economic incentive to choose RMBS that it expected to experience credit events in the near future. [Goldman Sachs] did not disclose Paulson’s adverse economic interests or its role in the portfolio selection process in the term sheet, flip book, offering memorandum or other marketing materials provided to investors.”

Paulson was not charged by the SEC, ostensibly because he did not make representations to investors or personally sell the product to them. Goldman Sachs settled the charges with the SEC in 2010 for $550 million. The Goldman Sachs salesman charged by the SEC in the matter, Fabrice Tourre, will face a trial this summer according to court documents.

The think-tank that sponsored the Thursday dinner event with Lew, the Council on Foreign Relations (CFR), is co-chaired by former U.S. Treasury Secretary Robert Rubin. Rubin was instrumental in shepherding the repeal of the Glass-Steagall Act which allowed Sandy Weill’s frankenbank, Citigroup, to merge insurance, investment banking, stock brokerage and insured deposits into a colossal mess called too-big-to-fail. Rubin left government and went directly to Citigroup, receiving over $120 million in compensation over the next 8 years serving in a non-management role at Citigroup.

Timothy Geithner, the U.S. Treasury Secretary who recently stepped down to make room for Jack Lew, also hangs his hat at CFR. Geithner was named a “distinguished fellow” at CFR this past February. Geithner is the former President of the Federal Reserve Bank of New York who shoveled trillions of dollars in loans at rates below 1 percent to prop up teetering too-big-to-fail banks during the 2008 to 2010 crisis.

Another dubious actor from the financial crisis pops up at CFR. The Honorary Vice Chairman of CFR is Maurice R. (Hank) Greenberg, the former Chairman and CEO of AIG, the company that collapsed into the arms of the U.S. taxpayer with a bailout of $182 billion. Hank Greenberg even has a think tank named after him at CFR: the Maurice R. Greenberg Center for Geoeconomic Studies.

Lew’s confidential confab with the barbarians at the gate would be unseemly for any sitting U.S. Treasury Secretary. But it’s especially repugnant given the added regulatory powers bestowed on the U.S. Treasury chief under the Dodd-Frank financial reform legislation.  Lew now Chairs F-SOC – the Financial Stability Oversight Council. Under Dodd-Frank, F-SOC “has the authority to recommend stricter standards for the largest, most interconnected firms, including designated nonbank financial companies…where the Council determines that certain practices or activities pose a threat to financial stability, the Council may make recommendations to the primary financial regulatory agencies for new or heightened regulatory standards.”

Americans have suffered for the past five years the economic nightmare that grew out of backroom deals, Wall Street and Washington’s revolving doors and crony capitalism. Lew continues the abhorrent tradition of drawing a dark curtain around the government’s interactions with Wall Street.