May Day Protesters With Sign “It’s Not a Crisis, It’s a Scam,” Cuffed and Jailed by NYPD 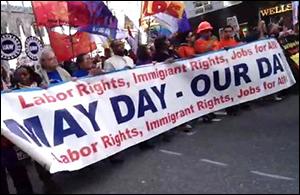 If you’ve spent any time at all on this web site, you know that a seven word poster – “It’s Not a Crisis, It’s a Scam” – neatly sums up what myself, Matt Taibbi, Paul Craig Roberts, Yves Smith, Ellen Brown, and Mike Krauss have devoted millions of words attempting to convey to the American public. Barry Ritholtz has also greatly advanced the topic as have many others.

Despite the veracity of the poster, a number of protesters from among the May Day marchers in New York City today were cuffed and jailed by the NYPD as they marched behind the sign. The police will not, at this time, give the tally of arrests.

The same group of protesters, calling themselves the Anti-Capitalists, sang out as they marched: “One, two, three, four — I declare a class war; five, six, seven, eight — eat the rich and smash the state.” 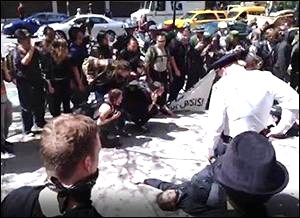 Police Arrest Protesters at May Day March In New York City; In the Background Is the Dropped Sign Reading, "It's Not a Crisis; It's a Scam"

If Congress is shocked at this level of anger, it can thank the President. No one has done more to fuel distrust and contempt for Wall Street than President Obama himself by rewarding its enablers with top posts in his new administration.

In addition to the involvement of Occupy Wall Street in the May Day protests, the evisceration of workers’ rights was a central theme in New York City as well as in similar protests around the U.S. and nations around the globe.

Ben Monterroso, Field Director of the Immigrant Justice Campaign of the Service Employees International Union (SEIU) issued a statement that read in part:

“Today, May Day, is a day to honor workers. Thousands of people are coming together to assert that we don’t believe in a ‘subclass’ of workers. We believe that hard working immigrants deserve protection from unscrupulous employers and should not be paid less than minimum wage. But if we’re not careful, conservative forces could succeed in creating a subclass of workers who are paid and treated differently than the rest of us. How? They want to strike down crucial citizenship provisions in the immigration reform bill that’s currently being debated.” 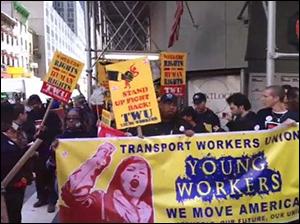 Members of the Transport Workers Union stunned building security by bringing their protests inside the lobby of a handful of businesses they say are engaging in union busting.