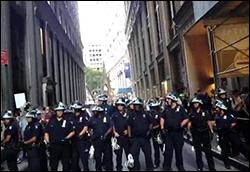 Yesterday, DBA Press and the Center for Media and Democracy released a stunning report showing how counter terrorism units and the Department of Homeland Security gathered intelligence on the Occupy Wall Street movement for the benefit of the very corporations targeted by the protesters.

Titled, Dissent or Terror: How the Nation’s Counter Terrorism Apparatus, In Partnership with Corporate America, Turned on Occupy Wall Street, the year-long investigation is based on the collection of thousands of pages of records obtained from counter terrorism and law enforcement agencies.

One of the revelations of the report is that Koch Industries, as well as billionaire Charles Koch and his son, Chase Koch, hired off-duty Wichita, Kansas police officers that served as their own private security force at the company and their personal residences in mid February 2012.  According to the report: “These dates coincide with Occupy Wichita’s  ‘Occupy Koch Town’ events, held from February 17 through 19, 2012.” Koch Industries, one of the largest private and most secretive corporations in the world is headquartered in Wichita. Charles Koch and his brother, David, are majority owners of Koch Industries and regularly pilloried in the press for funding corporate front groups that use the taxpayer subsidized nonprofit structure to push a deregulatory agenda.

Wichita police receive their training, guns, equipment, uniforms and benefits from the taxpayer. Lawsuits and liability borne from their activities also accrue to the taxpayer. Setting up a program which allows billionaires to hire armed, off-duty municipal police with the power to arrest is akin to the Praetorian Guard that protected Roman Emperors; do the police owe their fealty to the billionaires or the public interest?

On October 10, 2011, we reported on a similar program in New York City called the Paid Detail. The program began under Mayor Rudolph Giuliani in 1998. It permits the New York Stock Exchange and Wall Street corporations, including those repeatedly charged with crimes, to hire municipal police. At the time of our 2011 report, the corporations were paying an average of $37 an hour (no medical, no pension benefit, no overtime pay) for a member of the NYPD, with uniform, gun, handcuffs and the ability to arrest.  The officer is indemnified by the taxpayer, not the corporation.

When Wall Street investment bank, Lehman Brothers, collapsed on September 15, 2008, its bankruptcy filings in 2009 showed it owed money to 21 members of the NYPD’s Paid Detail Unit.  Other Wall Street firms that are known to have used the Paid Detail include Goldman Sachs, the World Financial Center complex which houses financial firms, and the New York Stock Exchange.

When Occupy Wall Street protesters attempted to demonstrate near the New York Stock Exchange, they were clubbed with night sticks, kicked in the face and carted off to jail. We don’t know if some of these brutal actions were conducted by the Paid Detail showing their fealty to their Wall Street masters. A deeply unsettling video of the NYPD suppressing dissent and brutalizing peaceful protesters was provided to the court in the Federal civil rights case, Rodriguez v. Winski. In 2004, Robert Britz, then President and Co-Chief Operating Officer of the New York Stock Exchange, told a congressional committee that the Stock Exchange had “established a 24-hour NYPD Paid Detail monitoring the perimeter of the data centers.”

The report released yesterday by DBA Press and the Center for Media and Democracy, showing coordination between law enforcement and corporate interests to suppress the public’s right to dissent and to seek a realignment of their democracy away from those very corporate interests, builds on the frightening fusion of police power and Wall Street interests described in our 2011 investigation of the Lower Manhattan Security Coordination Center. Built with hundreds of millions of taxpayer dollars, Wall Street personnel sit alongside the NYPD and other law enforcement, using the most advanced surveillance equipment to spy on law abiding citizens on the streets of Manhattan.