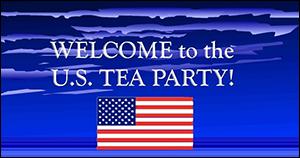 US Tea Party Was Formed by Koch's Citizens for a Sound Economy in 2002.

The Justice Department is investigating the investigators of the Tea Party at the IRS while leaving a 29-year criminal conspiracy against the American people by the Tea Party cabal untouched. That’s not surprising, given that the U.S. Attorney General, Eric Holder, and the former head of his criminal division, Lanny Breuer, came from the law firm Covington and Burling which played a seminal role in the conspiracy.

On February 8 of this year, the peer-reviewed health professionals’ journal, Tobacco Control, published an exhaustive study of the roots of the Tea Party dating back to the 1980s.  Researched and written by Amanda Fallin, Rachel Grana and Stanton A. Glantz, the study was funded by the National Institute of Health (NIH) and titled ‘To Quarterback Behind the Scenes, Third Party Efforts’: The Tobacco Industry and the Tea Party.

The authors explain how Citizens for a Sound Economy (CSE), which split into Americans for Prosperity and FreedomWorks in 2004, “was co-founded in 1984 by David Koch, of Koch Industries, and Richard Fink, former professor of economics at George Mason University, who has worked for Koch Industries since 1990.” According to the study, “CSE supported the agendas of the tobacco and other industries, including oil, chemical, pharmaceutical and telecommunications, and was funded by them.”

Long before the Tea Party had gained traction in the media, CSE started the first online Tea Party in 2002, calling it the US Tea Party. The federally funded NIH study shows that between 1991 and 2002, Philip Morris and other tobacco companies gave CSE at least $5.3 million.

CSE, a Koch created organization, was considered an integral part of Philip Morris’ strategy to thwart Federal regulation of cigarettes and second hand smoke. The authors write that Philip Morris  designated CSE a “Category A” organization for funding and it was assigned its own Philip Morris senior relationship manager. They cite a 1999 internal email at Philip Morris which asked if CSE was worth its current level of funding. Philip Morris’ vice president of federal government affairs, John Scruggs, replied:

Could there be a more perfect description of a taxpayer subsidized nonprofit operating as a covert front for Big Tobacco.

What was the benefit to David Koch and Koch Industries to be fronting for Big Tobacco? Koch Industries is one of the largest private companies in the world with interests in oil refining, chemicals, paper products manufacturing and trading. Regulation of air pollutants would crimp its bottom line.

According to the study, in the early 1990s, Big Tobacco tried to block the Environmental Protection Agency in designating second-hand smoke a human carcinogen. In August 1992, CSE sponsored a conference to emphasize that the Federal government was over-regulating. CSE featured Vice President Dan Quayle who had previously expressed interest in the effort to change the risk assessment for second hand smoke.

Legacy tobacco documents not included in the NIH-funded study include this 1994 Philip Morris document listed at SourceWatch which outlines the company’s plans for “co-op efforts with third party tax organizations.” Titled “Tobacco Strategy,” the memo describes the role of CSE as follows:

“We are funding a major (400K) grassroots initiative in the districts of House Energy & Commerce members to educate and mobilize consumers, through town hall meetings, radio and print ads, direct mail, patch-through calls to the Capitol switchboard, editorial board visits, polling data, meetings with Members and staff and the release of studies and other educational pieces. The goal of this effort is to show the Clinton plan as a government-run health care system replete with higher taxes and government spending, massive job losses, less choice, rationing of care and extensive bureaucracies. CSE is taking aim at the heart of the plan — employer mandates, new entitlements, price controls, mandatory health alliances, heavy load of new taxes and global budgets — and, with the program well underway, is by all accounts getting rave reviews in the respective districts.”

In late 1994 and 1995, Philip Morris and other tobacco companies launched an attack, using nonprofit front groups including CSE, to undermine the credibility of the Food and Drug Administration (FDA) which was attempting to regulate second-hand smoke. The media assault has an eerie resemblance to the current assault on the IRS, which is being pilloried every day on the right-wing OpEd pages of the Wall Street Journal as an out of control government bureaucracy.

One Philip Morris memo in late 1994 said that CSE, the Competitive Enterprise Institute, and the Washington Legal Foundation were working “to define the FDA as an agency out of control and one failing to live up to its congressional mandate regarding regulation of drugs and medical devices.” Beginning in December 1994, the memorandum stated, “these groups conducted an aggressive media campaign toward these goals, incorporating the issuance of policy papers, conducting symposia, filing petitions with FDA and taking other steps to keep the public and media focus on the agency.” CSE developed a 15-page strategy plan for gutting the FDA’s funding and keeping it under siege in the media.

In 1999, the U.S. Department of Justice sued the largest tobacco companies under the Racketeer Influenced and Corrupt Organizations Act (RICO).  The government charged that the tobacco companies engaged in a four-decade conspiracy to mislead the public about the dangers of smoking, distort the dangers of secondhand smoke, lie about the addictiveness of nicotine, deceitfully market cigarettes as light or low tar while fully aware that these products were as hazardous as regular cigarettes, and unconscionably target the youth market as “replacement smokers.”

Following a nine-month bench trial, on August 17, 2006, Judge Gladys Kessler of the U.S. District Court for the District of Columbia issued a 1,683 page opinion.  The Court found that “Cigarette smoking causes disease, suffering, and death. Despite internal recognition of this fact, Defendants have publicly denied, distorted, and minimized the hazards of smoking for decades.” The Court also found that lawyers for Big Tobacco had played a core role in the conspiracy, writing:

The Court stated in a footnote that “Despite the apparent conflict of interest, a few law firms, particularly Covington & Burling and Shook, Hardy & Bacon, represented the shared interests of all the Defendants and coordinated a significant part of the Enterprise’s activities.”

Today, a partner from Covington & Burling, Eric Holder, sits at the helm of the U.S. Department of Justice. Until his return to his former law firm in March of this year, following a devastating portrayal on PBS’ Frontline over his failure to prosecute Wall Street crimes, the head of the criminal division of the Justice Department was Lanny Breuer, also a partner at Covington & Burling. How exactly did such a discredited law firm seat its partners as the top law enforcement in the country.

Perhaps the law firm has changed the way it does business. That is difficult to reconcile with the fact that John Rupp, the partner at Covington & Burling that was singled out in Judge Kessler’s decision, is still employed at Covington & Burling, helping corporations handle their bribery and money laundering issues from his London office according to the firm’s web site. Also, the Court noted in its 2006 decision that it believed the wrongdoing on the part of lawyers for the tobacco industry was continuing into the present.

According to the Center for Responsive Politics, Americans for Prosperity infused $33,542,051 into the 2012 election cycle, while being registered with the IRS as a 501(c)(4) social welfare organization.

But Americans for Prosperity is just one piece of a massive juggernaut of interconnected nonprofits created, overseen or funded by oil billionaires Charles and David Koch. The nonprofits have words like liberty or freedom or tea party in their names but preach an anti-regulation, anti-union, anti-social security/medicare mantra. Their goals are neatly aligned with corporate interests.

The nonprofits are funded through a growing roster of Koch foundations: the Charles G. Koch Charitable Foundation, the David H. Koch Charitable Foundation, the Claude R. Lambe Charitable Foundation. The Charles Koch family also controls  the Knowledge and Progress Fund which has infused at least $8 million since 2005 into a super secretive black hole known as Donors Trust. Each year, Donors Trust and its sister organization, Donors Capital, provide tens of millions of dollars to the same nonprofits long supported by the Koch brothers. When the money is distributed, the names of the actual donors remain a deep, dark secret.

In 2010 this writer exposed how Donors Capital with Charles Koch’s fingerprints all over it bankrolled a $17 million project carried out by the nonprofit Clarion Fund to distribute 28 million DVDs of a race-baiting, Islamophobic documentary titled “Obsession: Radical Islam’s War Against the West” in swing voter states just seven weeks before the Presidential election of 2008. The DVDs were inserted into approximately 100 major newspapers and magazines in the U.S., along with a direct mail campaign. At the time, there was an ongoing smear campaign suggesting the election of Barack Obama would put a Muslim in the White House and elevate Islam in the U.S.

Just as the Justice Department found no crimes it could prosecute against Wall Street, it similarly finds nothing to prosecute within this 29-year conspiracy of Big Tobacco, Koch brothers, and the Tea Party cabal.

At a House hearing last week, Eric Holder said he has opened a criminal investigation into the IRS. The potential crime is that the IRS used the words “Tea Party” to search for potential frauds among organizations applying for nonprofit status; like there is not a mountain of evidence supporting that connection.

Mainstream media should redirect its doltish focus on key word searches at the IRS and get to the root of the real conspiracy. 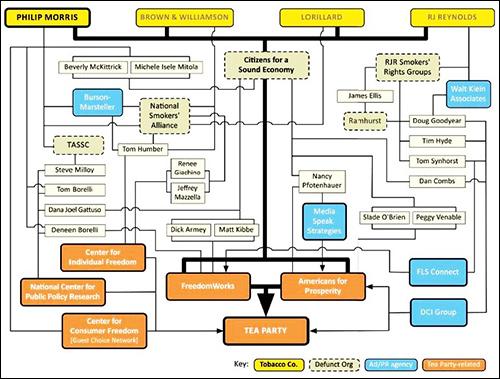 Connections between the tobacco industry, third-party allies and the Tea Party, from the 1980's (top) through 2012 (bottom). The thick black line connects CSE, founded by David Koch, with its direct successor organizations, Americans for Prosperity, FreedomWorks and the Tea Party. Source: Tobacco Control, February 8, 2013: ‘To Quarterback Behind the Scenes, Third Party Efforts’: The Tobacco Industry and the Tea Party.