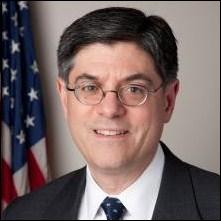 Jacob (Jack) Lew, currently serving as President Obama’s Chief of Staff, is slated to be nominated by the President this afternoon for one of the most critical posts in the country – Secretary of the U.S. Treasury.  The Treasury department played a central role in the 2008 to 2010 bailout of Wall Street and it would play an equally central role should there be another financial collapse.

Having a deep background in understanding the trail of deregulation that led to tens of trillions of dollars in highly leveraged, off balance sheet derivatives trading over the counter beyond the view of regulators should be the number one priority for a Treasury Secretary.  Understanding how those derivatives ended up threatening insured deposit banks because of the repeal of the Glass-Steagall Act should be requisite knowledge.  Without that understanding, the post will be held by a man who is putty in the hands of Wall Street’s push to maintain the status quo.  The status quo, inevitably, will lead directly to the next crash at a time when the U.S. is so deeply in debt it would have few options in providing either bailout funds or economic stimulus.

The importance of the role to be played by the next U.S. Treasury Secretary cannot be overstated.  There is no question that Lew is more than qualified on issues of budgets, deficits, and taxes.  But pose questions to him about structured investment vehicles, collateralized debt obligations, Libor rate rigging, synthetic derivatives, swaps, mortgage backed securities, and you are likely to see a blank face.  And yet, all of these issues create the finely interwoven fabric of a deregulated zombie financial system that could careen toward collapse at any time.

Equally important, Lew lacks the understanding that the deregulation of Wall Street ushered in a predatory trading and lending system that quickly evolved into an institutionalized wealth transfer mechanism, creating the greatest wealth inequality in the U.S. in the last century.

Prior to becoming President Obama’s Chief of Staff, Lew served as Director of the Office of Management and Budget, the same position he held in the Clinton Administration.  On September 16, 2010, the Senate Budget Committee held a confirmation hearing on Lew’s nomination to the post of budget director.  The exchange between Lew and Senator Bernie Sanders shows a man ill-equipped to negotiate the shark-infested waters of Wall Street.

Below is a verbatim excerpt from that testimony: 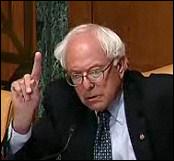 Bernie Sanders: “…Debt is a very serious problem, we have to deal with it, but it’s one of many problems. Among other things, the middle class in America is collapsing, poverty is increasing.  When President Bush was President, the middle class saw a $2,000 a year decline in median family income.  The issue I want to talk about which I hear very little discussion about – I want your views on — is the fact that the United States today has the most unequal distribution of income and wealth of any major country on earth. Sometimes we talk about the economy as if we’re all in this together. We clearly are not. Now I want your judgment and tell me what you think. In 2007, the wealthiest one percent earned 23 ½ percent of all income in America. In the 1970s that number was 8 percent….Do you think that that is okay; do you think that that is an issue that the President should focus on; do you think it’s morally okay; do you think it’s economically okay?

Jack Lew: I think that the distribution of income is a challenge and a problem and it’s something that we need to focus on.  I think as a matter of Federal policy it’s really one of the things that drives the debate on whether or not to extend the tax cuts for people earning over $250,000 a year. That would be the wrong thing to do at a time when we have the disparity of income distribution that you’re describing. I think that the real challenge we face is how to grow the economy, grow jobs, create the kinds of better income earning opportunities for more working Americans.

Bernie Sanders: We certainly agree; that’s what everybody says but the reality is over the last 30 years almost all of the new income created has gone to the top one percent. And, in fact, today [the] top one-tenth of one-percent earns 11 percent of the income.  Do you think that that is morally acceptable.

Lew: I think that it is very important that we focus on what are the income levels of working Americans, middle income Americans and the decline of incomes is not a good thing…

[Next came a brief discussion on trade policy where Lew delicately tip-toed around the outsourcing of manufacturing jobs to low-wage countries. Then came the signature moment of Lew’s testimony.]

Sanders: We are in the midst of a horrendous recession right now.  Sixteen percent of our people are unemployed or underemployed.  Clearly, the immediate precipitating factor was the collapse on Wall Street. Do you believe that the deregulation of Wall Street, pushed by people like Alan Greenspan,  Robert Rubin contributed significantly to the disaster we saw on Wall Street several years ago.

Lew: Senator, when we discussed I mentioned to you I don’t consider myself an expert in some of these aspects of the financial industry.  My experience in the financial industry has been as a manager, not as an investment advisor. My sense, as someone who has generally been familiar with these trends is that the problems in the financial industry preceded deregulation; there was an increasing emphasis on highly abstract leveraged derivative products that got us to the point that in the period of time leading up to the financial crisis risks were taken, they weren’t fully embraced, they weren’t well understood.  I don’t personally know the extent to which deregulation drove it but I don’t believe that deregulation was the proximate cause. I would defer to others who are more expert about the industry to try and parse it better than that.