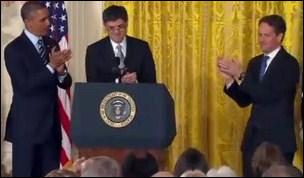 As expected, shortly after 1:30 today the President appeared at a press conference to nominate his Chief of Staff and former budget director, Jacob (Jack) Lew as U.S. Treasury Secretary.  Lew will face a Senate Confirmation process before he can assume the post. Outgoing Treasury Secretary, Timothy (Tim) Geithner, was present for the nomination and was lavishly praised by the President.

The President’s remarks revealed no hint that the U.S. Treasury, which auctions the government’s U.S. Treasury bills, notes and bonds through Wall Street firms, is dealing with one of the most intractable periods of corruption on Wall Street this nation has ever witnessed. As one of numerous examples coming to light of continuing frauds, a global cartel of banks, including at least two of Wall Street’s largest banks according to affidavits, have fleeced cities and municipalities across the country by rigging the benchmark Libor interest rate.  The firms have also cheated millions of investors by trading on insider information as interest rates were rigged on exchange-traded interest rate futures contracts.

One of the earliest men to become aware of the rate rigging was Geithner, then serving as President of the Federal Reserve Bank of New York. As we reported previously, Geithner testified before Congress that he reported his knowledge on Libor rate rigging to the President’s Working Group on Financial Markets. That was in 2008, under the administration of George W. Bush, and included the SEC, Commodity Futures Trading Commission (CFTC), Federal Reserve and Treasury. It did not include the U.S. Department of Justice (DOJ), the body with the power to bring a criminal investigation and prosecution. There are mountains of emails, affidavits and trading records showing a global conspiracy by banks against the public interest but there have been no prosecutions by the U.S. Department of Justice after four long years of regulatory scrutiny.

The praise bestowed upon Geithner by the President stands at extreme odds with the view of his government colleagues. Neil Barofsky, former Special Inspector General for TARP, portrayed Geithner as an evil genius in his book, Bailout.  According to Barofsky, Geithner used the Home Affordable Modification Program (HAMP) to “foam the runways” for the banks, slowing down the foreclosure stream so the banks could stay afloat, with no genuine goal to help struggling families stay in their homes.

Sheila Bair, former head of the FDIC, paints an equally ominous picture of Geithner’s relationship with Citigroup in her book, Bull by the Horns. Geithner showered the insolvent firm with $2.5 trillion in Fed loans, taxpayer capital, and asset guarantees.

The reports from insiders are compatible with Ron Suskind’s Confidence Men where Geithner ignores a directive from the President of the United States to wind down Citigroup.  Instead, Citigroup gets a massive bailout package from the Federal government.

The President’s glowing praise of Geithner today felt sheared from reality.  “A little more than four years ago, I stood with Mr. Tim Geithner and announced him as my first nominee to my cabinet,” said the President. “We were barely two months into the financial crisis. The stock market had cratered. The housing market had cratered, as well. Bank after bank was on the verge of collapse. And worst of all, more than 800,000 Americans would lose their jobs in just that month. And the bottom was not yet in sight. So I couldn’t blame Tim when he tried to tell me he wasn’t the right guy for the job…”

The President continued: “Then, with the wreckage of our economy still smoldering and unstable, I asked Tim to help put it back together. And thanks in large part to his steady hand, our economy has been growing again for the past three years, our businesses have created nearly 6 million new jobs, the money that we spent to save the financial system has largely been paid back, we put in place rules to prevent that kind of financial meltdown from ever happening again, an auto industry was saved, we made sure taxpayers are not on the hook if the biggest firms fail again…So when the history books are written, Tim Geithner’s going to go down as one of our finest secretaries of the treasury.”

If truth still has a place in America, then it must be noted that it is decidedly untrue that taxpayers could not end up on the hook again if large Wall Street firms fail.  What is decidedly true is that the risk has been concentrated to a greater extent than ever before in U.S. history in four U.S. banks: JPMorgan Chase, Bank of America, Wells Fargo and Citigroup.  It is also true that the corruption on Wall Street continues unabated.

As we report in the post below, Jack Lew is an admirable budget and deficit wonk.  But he will end up as just another Wall Street messenger boy if he doesn’t appoint a tough Deputy Treasury Secretary who intimately understands Wall Street’s connivances and frauds and is prepared to deal with them head on.