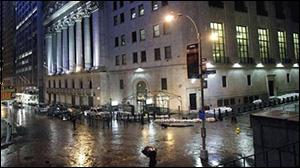 New York City is urging all residents to remain indoors, avoid use of elevators and stay away from windows as a precaution against flying debris. The following updates have been posted by New York City: