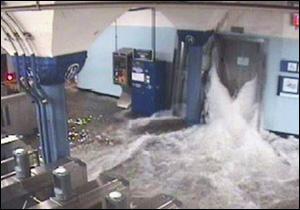 Port Authority of NY and NJ Released This Photo of Water Rushing Out of an Elevator Shaft Into a Hoboken, NJ Path Station

Joseph Lhota, Chairman of the MTA, released the following statement on the current condition of the New York City subway system:

“The New York City subway system is 108 years old, but it has never faced a disaster as devastating as what we experienced last night. Hurricane Sandy wreaked havoc on our entire transportation system, in every borough and county of the region. It has brought down trees, ripped out power and inundated tunnels, rail yards and bus depots. As of last night, seven subway tunnels under the East River flooded. Metro-North Railroad lost power from 59th Street to Croton-Harmon on the Hudson Line and to New Haven on the New Haven Line. The Long Island Rail Road evacuated its West Side Yards and suffered flooding in one East River tunnel. The Hugh L. Carey Tunnel is flooded from end to end and the Queens Midtown Tunnel also took on water and was closed. Six bus garages were disabled by high water. We are assessing the extent of the damage and beginning the process of recovery. Our employees have shown remarkable dedication over the past few days, and I thank them on behalf of every New Yorker. In 108 years, our employees have never faced a challenge like the one that confronts us now. All of us at the MTA are committed to restoring the system as quickly as we can to help bring New York back to normal.”