The peaceful stirrings of Occupy Wall Street began with a poster of a lithe ballerina poised gracefully on a bull with the reminder – “Bring tent.”  After a year of arrests, evictions, police brutality, and no prosecutions of Wall Street titans, the mood is less sunny. 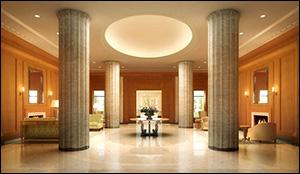 An offshoot of Occupy Wall Street called Occupy Goldman Sachs has now set up a camp outside the ultra luxurious home of Goldman CEO Lloyd Blankfein at 15 Central Park West in Manhattan.  The group is calling for a big protest there on November 10 at 12 noon with the reminder to bring pitch forks and torches (fake ones, of course.)  By this time next year, the reminder that the armaments should be fake may be shelved.

Explaining the protest on its web site, www.OccupyWallSt.org, the group says “this is a reminder that, as we close in to the 2012 elections, all roads lead to Wall Street. Heads they win, tails we lose; whoever wins the presidency there will be a victory party at Goldman Sachs.”

The heads they win, tails we lose ethos is fully functional inside the marble corridors of 15 Central Park West.  Earlier this year, Sandy Weill sold his terraced, 6,700 square foot apartment there for $88 million.  He paid $43.7 million for the penthouse pad in 2007.  So the market value he was paying property taxes on should have been somewhere between those two figures, right? I mean that’s how the rest of America pays property taxes, right?

Same one-percenter math has smiled on the gilded hallways of Lloyd Blankfein’s not so humble abode at 15 Central Park West.  Blankfein paid $26,474,500 for his condo on January 18, 2008. Assuming, with improvements, it doubled in value in the same fashion as Weill’s posh digs, he should be paying property taxes on a market value somewhere between $26 million and $52 million.  Instead, New York City has assigned a market value of $2,621,582 and an assessed value of $949,809.  That assessed value would have produced a property tax of $127,588 but with the special abatement, Blankfein is paying an annual property tax of $52,889.

For billionaires, those cheap property taxes are quite a deal.  Here’s a rundown of the amenities at 15 Central Park West: an in-house chef who can whip up a cozy candle-light dinner for two or a custom menu for up to 80 guests;  a 14,000 square foot fitness center featuring a 75-foot skylit lap pool, two steam rooms and sauna; a climate-controlled wine cellar and tasting room with more than 30 private wine cellars for purchase.  There are also gardens and a motor court.

Earlier this year, Weill, the man most responsible for the repeal of the investor protection legislation  known as the Glass-Steagall Act, said he owned another smaller apartment at the same address, in addition to the $88 million one he sold.

On July 25, Weill went on CNBC to call for breaking up the big Wall Street banks.  If he’s really committed to breaking up the banks, maybe he should be invited to the party outside his residence on November 10 to explain his role in the financial debacle as well as the fuzzy math on his property taxes.