Goldman Sachs’ Paywall to Your Democracy

The word paywall is typically used to describe web sites which make you pay to gain access.  But viewed with the added perspective of the image below, that’s what representative government in the U.S. has become – a paywall to access.

The following chart is provided through the courtesy of the Center for Responsive Politics. The Center calls it the list of Goldman Sachs heavy hitters from 1989 to 2012 — those employees of Goldman Sachs making the largest political contributions.  (It should be noted that not all individuals listed on the chart continue to work for Goldman Sachs.)

The first entry on the list is Todd J. Christie – brother to the current Governor of New Jersey, Chris Christie, who said last week he plans to run for President in 2016.  Todd J. Christie is the former CEO of Spear, Leeds &  Kellogg, the New York Stock Exchange specialist firm which Goldman Sachs purchased in 2000 for $6 billion.  Todd Christie received $60 million in the deal.

The SEC brought an action against Todd Christie in 2005 for cheating customers out of thousands of dollars in the trading of IBM and AOL Time Warner.  In 2008, Christie settled the charges without admitting or denying the findings (the despicable curse of the SEC in this lost decade of America).  The SEC took separate actions against other traders at the firm.

One remarkable aspect of the chart below is that if you click on the individual names, such as Christie, then click on “Itemized Contributions,” you find a really dirty little secret about which few Americans are aware — the sums that can be contributed to committees by the individual, above and beyond candidate contributions.  On April 22, 2002, for example, Todd Christie made a $225,000 lump sum contribution to the Republican National State Elections Committee.

Over years of using data at the Center for Responsive Politics, I have never found an error.  But I couldn’t believe the size of this contribution from a single individual so I checked it out myself at the Federal Election Commission.  The dollar amount was memorialized in a receipt at the commission.

Obscene contributions such as these were only somewhat curtailed under the McCain-Feingold legislation (Bipartisan Campaign Reform Act of 2002) with new legal limits becoming effective on January 1, 2003.

So here’s what Todd Christie was able to give to a committee of the co-author of that bill in 2008:

Last year, the National Bureau of Economic Research released a study showing that 50 percent of the population would not be able to come up with $2,000 within 30 days for an unexpected expense.  The Census Bureau reports that 46.2 million people in America, the highest number in the 52 years the bureau has been publishing figures on poverty, are living at or below the poverty line, which in 2010 was $22,314 for a family of four.  Now you get a proper perspective on America’s paywall to representative government.

Below are the current Political Campaign Contribution Limits provided by the Federal Election Commission.

An individual may give a maximum of:

A husband and wife each have separate contribution limits, even if only one spouse has an income. For example, a couple may contribute a $5,000 check to a candidate’s primary campaign as long as both sign the check… 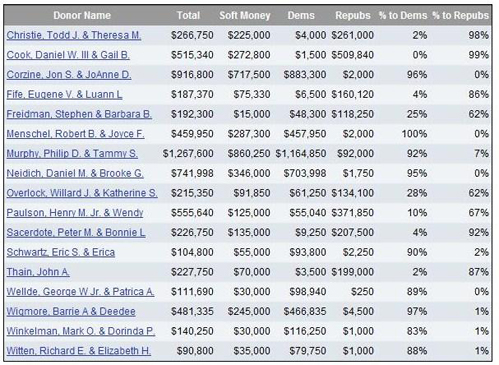