Barofsky Book: Goldman Sachs and Morgan Stanley Would Have Failed Next 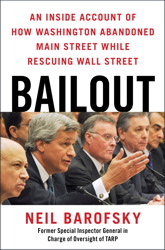 They’re everywhere – on 60 Minutes, peeping out of the display window at Barnes and Noble, going out on internet news feeds.  I’m talking about insiders who want to fill in the cracks and voids of Wall Street’s criminal wealth transfer system that has had an iron grip around our country’s throat since at least 1996.

Neil Barofsky, the former Special Inspector General of the Troubled Asset Relief Program (SIG-TARP), has penned a humdinger.  Titled Bailout: An Inside Account of How Washington Abandoned Main Street While Rescuing Wall Street, it confirms what we’ve suspected since U.S. Treasury Secretary Tim Geithner appointed Mark Patterson, a Goldman Sachs lobbyist, to be his Chief of Staff – that the U.S. Treasury Department has become Wall Street West.

Barofsky was minding his own business dealing with drug cartels and mortgage fraud (a cakewalk compared to Wall Street) as an Assistant U.S. Attorney for the Southern District of New York when the George W. Bush administration picked him to oversee the outflow of what would become trillions of dollars in taxpayer bailouts to Wall Street.

Barofsky has meet and greets with his fellow colleagues at the Treasury Department and other Inspector Generals in their lavish and expansive offices – then he’s led to his new quarters in the Treasury building: a literal stink hole next to the cafeteria.  Next Barofsky is delivered a crystal clear message from Herb Allison, a Wall Street retread from Merrill Lynch who was plucked by Geithner to be Assistant Treasury Secretary.  Allison warns:  “Out there in the market, there are consequences for some of the things that you’re saying and the way that you’re saying them.”  Then Allison invokes the Wall Street code: “Well, is it an appointment you might be looking for? Something else in government? A judgeship?” [An office that’s not a stink hole?]

I’ve always suspected that Goldman Sachs and Morgan Stanley were miraculously anointed as bank holding companies during the height of the crisis because they were about to fail.  Barofsky weighs in on that.  Then Treasury Secretary Hank Paulson told Barofsky “that he believed that Morgan Stanley was just days away from collapse, and Ben Bernanke, the chairman of the Federal Reserve, similarly confided that he believed that Goldman Sachs would have been the next to go.  After that, all bets on the country’s financial system would have been off.”

Barofsky was a Democrat.  George W. Bush knew that and yet appointed him anyway.  And the irony is that even after the Obama administration took over, to deal with Geithner’s obstructionist efforts to thwart oversight of the outflow of the taxpayers’ purse into obscene bonuses and backdoor deals on Wall Street, Barofsky time and again had to turn to Republican members of Congress in order to move forward.  That’s not really the message the Obama team needs on the airwaves three months before the Presidential election.  (Of course, the other option is for the American people to elect Mitt Romney, a man who wants to gut all significant restraints on Wall Street.)

Unfortunately, the truth has a way of seeping into the public consciousness at inconvenient times.  Wall Street has never been held in lower regard by the public, and yet, more insider truth telling of its dirty underbelly spills out almost daily.

Omer Rosen is the latest to deal the dirt on Citigroup.  Writing yesterday at Boston Review, Rosen, who previously worked in a derivatives department at Citigroup, says he structured what he was told were illegal tax-evading schemes, simultaneously screwing both his client and the American taxpayer.  Rosen writes: “In so doing, they would hope to save millions of dollars (and so cost the U.S. government millions of dollars). We at Citigroup just hoped to net a seven-figure fee…”

Rosen had filled in more details in February of last year, writing as follows:

“Our clients were non-financial corporations, the Deltas and Verizons of the world, which relied on us for advice and education. Our directive was ‘to help companies decrease and manage their risks.’ Often we did just that. And often we advised clients to execute trades solely because they presented opportunities for us to profit. In either case, whenever possible we used our superior knowledge to manipulate the pricing of the trade in our favor…Other sources of profit lay in details that clients thought were merely procedural but in actuality affected pricing as well. Once, a client called after his interest-rate swap was completed and asked to change a method of counting days. Unbeknownst to him, this change should have lowered his rate. I made the requested change but kept his rate the same, allowing us to realize unwarranted profit. This was standard practice. My coworkers knew what I had done, as did the traders, as did the people who booked trades. I even tallied the ‘restructuring’ as an achievement in a letter angling for a higher bonus.”

Wall Street’s cancer has metastasized into every nook and cranny of our financial infrastructure.  It should be clear to any thinking member of Congress that pruning around the edges of financial reform cannot deal with this entrenched criminal syndicate.  The heads of top management must roll, including government regulators and overseers, and the big banks must be broken up.  Each day that passes without serious reform poses a risk to the safety and soundness of the United States’ financial system.