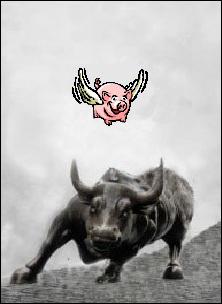 It has only taken twelve years of unending Wall Street scandals and scoundrels, the greatest financial collapse since the Great Depression, a wrecked national economy, 46 million fellow Americans living below the poverty level — including one in every five children — but, finally, the pigs are flying over Wall Street.  Yes, the unthinkable has happened.  The New York Times has admitted it was wrong about repealing the Glass-Steagall Act while Sandy Weill calls for taking a wrecking ball to the big banks.

In an editorial published in the print edition of the New York Times yesterday, “The Big Banker’s Change of Heart,” the paper of record at last fessed up to its role in America’s nightmare decade.

Making his call for breaking up the Wall Street banks into insured deposit institutions separated from investment banks on CNBC’s business network on July 25,  Weill did not go as far, saying the big bank model was right back when he deployed it but not now.  He offered not a shred of substance to support that position.  Weill did not apologize to the Nation for the misery he had helped to cause and he preposterously lied about having anything to do with the repeal of Glass-Steagall, saying it had gone away in the 1980s.

The repeal of the Glass-Steagall Act occurred on November 12, 1999 with the passage of the Gramm-Leach-Bliley Act, officially known as the Financial Services Modernization Act of 1999.  That legislation repealed the portion of the Glass-Steagall Act which barred banks holding insured deposits from merging with Wall Street securities firms.  It also removed the barrier located in the Bank Holding Company Act of 1956 which prevented insured deposit banks from merging with insurance companies.

In making his absurd claim on CNBC, Weill was attempting to rewrite his own autobiography, The Real Deal.  Published in 2006, the same year Weill stepped down as Chairman of Citigroup,  the Frankenbank he had created in 1998 in violation of existing law, Weill writes on page 269: “Around this time, we had been discussing strategic options with Marty Lipton and his team of banking lawyers at Wachtell Lipton. The firm’s lawyers captured my attention by claiming they could help us circumvent the legal issues involved with merging with a bank. Two powerful federal laws, the Bank Holding Company Act of the 1950s and the Depression-era Glass-Steagall Act, stood in our way – these laws prohibited commercial banks from diversifying and specifically ruled out affiliation with securities firms and insurance companies.”

And the New York Times was not completely candid either.  It did not just forcefully advocate the repeal of the Glass-Steagall Act as it now confesses.  It waved pompoms, on its editorial page, for Sandy Weill and his unwieldy behemoth that would collapse into the arms of the taxpayers in 2008.  On April 8, 1998, the following appeared on the Times editorial page:

The inherent problem with restoring Glass-Steagall is not writing the legislation.  It takes but one sentence to restore sanity to the financial underpinning of America: “No bank holding insured deposits can own or be affiliated with an investment bank, broker-dealer, futures commission merchant, insurance company or engage in the underwriting of stocks and bonds.”  The problem is that Congress will succumb to the inevitable lobbying demand that Wall Street be given a phase-in period of, minimally, two years.  Frankly, under the current financial structure, America doesn’t have that long before the next great collapse.