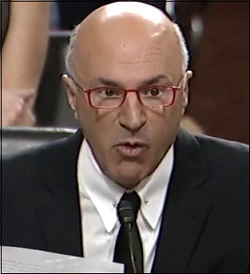 If you are an average American without insider knowledge of how Congress works these days, you might have felt that you had stepped onto the set of Alice in Wonderland while watching the Senate Banking Committee hearing yesterday.

The hearing was convened to examine the sudden collapse of the crypto exchange, FTX; its tentacles that reach into the federally-insured banking sector; and legislation that may be required to rein in the mushrooming risks that crypto poses to U.S. financial stability.

Given that more than one million customers of FTX cannot get access to the money or crypto “investments” in their potentially worthless accounts; that the kingpin of this operation, Sam Bankman-Fried, was indicted on Tuesday by the U.S. Department of Justice on eight criminal counts; and that a federally-insured bank, Silvergate Bank, that held FTX customer deposits, has seen its publicly traded parent (Silvergate Capital Corp., ticker SI) lose 87 percent of its market value year-to-date, one might have expected that serious consideration would have gone into the selection of the four witnesses that appeared at yesterday’s hearing.

Instead, the Republican crypto shills on the Senate Banking Committee made the public suffer through the alternative-reality ruminations of Kevin O’Leary, a cast member of the TV program, “Shark Tank,” who admits to receiving $15 million from FTX to be its “ambassador.” O’Leary is a named defendant, along with other celebrities who took money to promote FTX, in multiple class action lawsuits. He thus has an incentive to spin the narrative away from fraudulent conduct. In his opening remarks at the hearing, O’Leary also admitted to being “a shareholder in multiple companies involved in crypto.”

Along with multiple Republican Senators on the Senate Banking Committee, O’Leary attempted to push the narrative that the collapse of FTX has nothing to do with crypto itself; that crypto continues to offer great promise. O’Leary told the Committee that if legislation were passed to ban banks from engaging in crypto activities, he would “short every American bank stock.” (To “short” means to bet on a decline in price.) O’Leary also insisted that once crypto is regulated, it “is going to be profound in terms of how it changes the cost, the efficiency, the audit ability, the productivity of the banking sector.”

There is, in fact, zero evidence to suggest that crypto offers any productive use for the financial sector, as more than 1,600 scientists and software engineers have already explained in a detailed letter to the Senate Banking Committee and as was detailed by a serious witness at yesterday’s hearing — Hilary J. Allen, Professor of Law at American University Washington College of Law. 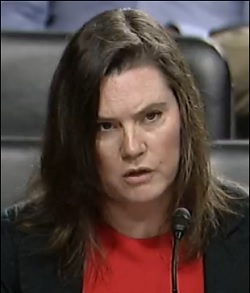 Professor Allen’s research focus is in the area of financial stability regulation. She is the author of Driverless Finance: Fintech’s Impact on Financial Stability, released by Oxford University Press in January. Professor Allen also worked in 2010 with the Financial Crisis Inquiry Commission to study the causes of the financial crisis of 2007-2008. She made the following key points at yesterday’s hearing, either in her verbal or written testimony:

“The problems at FTX were not a one-off, but part of a cascade of interconnected failures in the highly leveraged crypto financial system.”

“Another key flaw in the ‘this wasn’t about crypto’ narrative is that many of the problems at FTX arose because of a feature that is unique to the crypto industry: cryptoassets (like the FTT token) can be created out of nothing by anyone with computer programming abilities. I have previously explained that this unlimited supply of cryptoassets allows for significant leverage, making the crypto ecosystem very fragile. The unlimited supply of cryptoassets also ensures that frauds are particularly easy to perpetuate: when an entire industry is built on an asset type that can be manufactured at zero cost, has no fundamentals, and trades entirely on sentiment, traditional checks on fraud (like valuation methodologies and financial accounting) will inevitably break down.”

Crypto tokens “are minted out of thin air.”

“Crypto should also not have the CFTC [Commodity Futures Trading Commission] as its primary regulator. The CFTC has no statutory investor protection mandate, has limited experience regulating retail-dominated markets, and the application of the CFTC’s self-certification regime to crypto would allow an unlimited supply of cryptoassets to proliferate.”

Professor Allen’s slap down of the idea of allowing the CFTC to regulate crypto seemed to age Senator Cynthia Lummis (R-WY) by about 20 years. When Lummis took her turn at questioning the witnesses later in the hearing, her face showed serious signs of stress. That might be because the legislation she has co-introduced with Senator Kirsten Gillibrand (D-NY) to allow the CFTC to oversee crypto, was just exposed in the hearing as a sell-out to crypto interests. (See our earlier report: After Crypto Money Piled into Campaign Coffers of Senators Lummis and Gillibrand, They Introduced a Sweetheart Legislative Bill for Crypto.)

Another witness at yesterday’s hearing was Ben McKenzie, the actor and crypto researcher who has a book coming out next year with journalist Jacob Silverman, Easy Money: Cryptocurrency, Casino Capitalism, and the Golden Age of Fraud. McKenzie demonstrated an acute understanding of the fraudulent aspects of crypto, stating:

“ ‘Cryptocurrencies’ are not currencies by any reasonable economic definition, as they are unable to fulfill any of the three functions of money. They are a poor medium of exchange, unit of account, and store of value. Bitcoin cannot work as a medium of exchange because it cannot scale. The Bitcoin network can only process 5 to 7 transactions a second. By comparison, Visa can handle tens of thousands. To facilitate that relatively trivial amount of transactions, Bitcoin uses an enormous amount of energy. In 2021, Bitcoin consumed 134 TWh in total, comparable to the electrical energy consumed by the country of Argentina. Bitcoin simply cannot ever work at scale as a medium of exchange.”

The fourth witness, Jennifer J. Schulp, was another crypto-friendly narrator from a suspect nonprofit – the Cato Institute, which was previously secretly owned by the fossil fuel billionaires, the Koch brothers, and a handful of other men.

You can watch the full hearing at this link.