Congressman Brad Sherman Versus the Crypto Gang in Congress 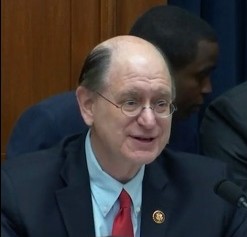 There’s a dangerous and growing threat to financial stability that is being fueled by crypto money pouring into the coffers of Republicans in Congress – particularly those members who sit on the House Financial Services Committee where crypto devotee Patrick McHenry (R-NC) will take over as Chair in January.

Last month, American Prospect’s David Dayen revealed that earlier this year when the crypto exchange FTX and other crypto firms were receiving inquiries from the SEC, Congressman Tom Emmer (R-MN) (the newly-elected Majority Whip) was the lead signatory to a March letter to SEC Chair Gary Gensler signed by four House Republicans and four House Democrats, effectively telling the SEC to back off. The letter also demanded answers to 13 questions, some of which had the appearance of simply trying to burden the SEC with nonsensical paperwork. For example, one question asked:

“Over the past five years, how many voluntary document requests has the SEC sent to individuals, project teams, entities, or the like regarding activities related to cryptocurrency, digital assets, or other uses of blockchain technology (Relevant Entities)? Please provide a year-by-year breakdown of these requests or an approximation if such a breakdown is not available.”

Dayen notes in the article that “…Emmer was the head of the National Republican Congressional Committee, the campaign arm for House Republicans, this year. The NRCC’s associated super PAC, the Congressional Leadership Fund, received $2.75 million from FTX in the 2022 cycle; $2 million from [FTX executive Ryan Salame] in late September, and $750,000 from the company’s political action committee.”

FTX has now collapsed; at least $8 billion of customers’ money is missing; and the co-founder and CEO of FTX, Sam Bankman-Fried, has been indicted on eight criminal counts by the U.S. Department of Justice.

But instead of being chastened by the experience, the members of Congress whose political campaign coffers are being enriched by the crypto cabal, are attacking the SEC for being asleep at the switch while they simultaneously compare crypto to great innovations, such as railroads, that experienced blips in their infancy. That narrative has now been repeated so often by so many Republicans in Congress that it has the hallmarks of a carefully-tailored script crafted by a crypto lobbyist and/or marketing firm.

Despite the brazen “embezzlement” of customer funds at FTX, and the testimony of John Ray III, the man put in charge of the bankruptcy proceeding, that wallets on blockchain holding looted FTX assets may never be discovered, Congressman Emmer had this to say last Tuesday at a hearing on FTX before the House Financial Services Committee:

“Fortunately, the immutable characteristics of public blockchains – that some people would care not to understand in this committee – allowed the crypto community to reveal Sam Bankman-Fried’s fraud and the on chain public record will assist law enforcement moving forward.”

The “crypto community” did not reveal any such fraud. A run on the exchange occurred following a news article by Ian Allison for CoinDesk that sparked panic about FTX. The run exposed the fact that funds did not exist to pay back customers.

“For five years I’ve been trying to ban American investments in crypto. I’m the only member of the House to get an F from the only crypto-promoting organization that rates members of Congress.

“My view is that we’ll view Sam Bankman-Fried as just one big snake in a crypto Garden of Eden. The fact is that crypto is a garden of snakes.

“Now, from the outside, crypto just looks like a non-fungible token. An electronic pet rock for the 21st Century. Something that might be good to invest in even though it has no apparent value because you might get someone else to buy it from you for even more.

“It puts the advantage right in the name: crypto – ‘hidden’ currency.

“Is there a big market for that? Is there a big advantage that crypto has over the U.S. dollar if it actually became a currency – which it’s not yet?

“Well, there are drug dealers, human traffickers, sanction evaders that will find that to be a good feature. And, as Sam Bankman-Fried would tell you, there’s a hell of a market for bankruptcy-court evasion. But the big market is tax evasion.

“And I know there are some on the other side who cheer every time a billionaire escapes taxes.

“The other announced purpose of crypto is to compete with the U.S. dollar as a world reserve currency, thereby enriching the corporate billionaire bros and taking thousands of dollars of advantage away from every American family. Because we benefit from being a reserve currency.

“Now, Sam Bankman-Fried – or should I say inmate 14372 – had one purpose in all of his efforts here in Congress. (Was a well-known figure. Only one wearing shorts.) His one purpose was to keep the SEC out of crypto. To provide a patina of regulation – baby regulation from the CFTC [Commodity Futures Trading Commission]. Well, I have one comment for my colleagues: Don’t trash Sam Bankman-Fried and then pass his bill.

“I fear that could happen because Sam was not the only crypto bro with PACs and lobbyists and there is no PAC or lobbyist here to work for efficient tax enforcement, or sanctions enforcement.

“Now, I’ve heard from some on the other side – criticizing the SEC. July, in this room, I criticized the head of enforcement at the SEC for not going after crypto exchanges. But the fact is – without objection I’d like to put in the record a letter signed by 19 Republican members designed to push back on the SEC – a brush back pitch if you’re familiar with baseball – attacking the SEC for paying attention to – and I’ll quote ‘the purported risks of digital assets.’

“And, I’d like to put in the record comments from eight members, made in this room, that were designed to attack the SEC as being a luddite and anti-innovation for their efforts.”