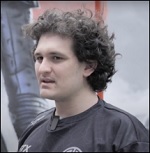 FTX, the second largest crypto exchange, is teetering near bankruptcy this morning; has shuttered withdrawals of money and crypto by its customers; and is dealing with investigations by the Securities and Exchange Commission, the Commodity Futures Trading Commission and the U.S. Department of Justice. At least one of those investigations is focusing on the potential misuse of customer funds between FTX and Alameda Research, a trading firm created by FTX founder and CEO, Sam Bankman-Fried. The Wall Street Journal reports that FTX has a “shortfall of up to $8 billion.”

A deal by the largest crypto exchange, Binance, to buy out FTX as it faltered, was scrapped yesterday after due diligence lawyers for Binance didn’t like what they saw.

As recently as January, FTX had a valuation of $32 billion. Its sophisticated investors include Sequoia Capital, BlackRock, Tiger Global Management,  SoftBank, Third Point, private-equity firm Thoma Bravo and – wait for it – the Ontario Teachers’ Pension Plan. Bloomberg News reports that Sequoia Capital has written down “the full value of its holdings in FTX” as the news on its future worsened this week.

Bankman-Fried, to an uncanny degree, used sports teams and famous athletes to promote his brand, which should have been an early red flag to regulators. (See our report: How Crypto Is Using the Behavioral Dynamics of Bernie Madoff’s Fraud.) The FTX.US website lists the following tie-ins, as well as others: 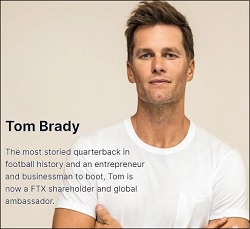 “Major League Baseball: In a first-of-its-kind partnership between a global sports league and a cryptocurrency exchange, the FTX patch worn by MLB umpires debuted at the ‘21 All-Star game and will be worn by all umpires at MLB regular season and post-season games.”

“FTX Field: With a number of members of the FTX team as University of California-Berkeley alums, we were thrilled to rename FTX Field at Cal Memorial Stadium.”

“Golden State Warriors: FTX became the Warriors’ official cryptocurrency platform and NFT marketplace in early 2022. The partnership marks the first international rights partner for the Warriors, where the team and FTX will have a visible international market presence, inclusive of logo and likeness.”

“Tom Brady: The most storied quarterback in football history and an entrepreneur and businessman to boot, Tom is now a FTX shareholder and global ambassador.”

“Trevor Lawrence: The NFL’s number one draft pick and one of football’s most exciting young stars joined FTX as a partner and ambassador in early 2021.”

“David Ortiz: Known for his big presence both on and off the field, the 3x World Series Champion, 10x All-Star and Boston legend — Big Papi — joined FTX to continue racking up ‘Moonblast’ home runs through his own crypto journey.”

“Udonis Haslem: 3x NBA Champion. Captain of the Miami HEAT. Udonis Haslem is the heart and soul of the 305. Through our partnership, UD and FTX will continue to educate the Miami community on crypto and drive impact through a number of charitable initiatives.”

The speed at which FTX has unraveled and the evaporated billionaire status of its founder, Sam Bankman-Fried, has had a dramatic and negative impact on other cryptocurrencies. Bitcoin traded as low as $15,550 yesterday, its lowest level in two years.

Publicly-traded crypto related companies were also deeply impacted. Crypto exchange Coinbase closed down 9.54 percent yesterday on Nasdaq. Coinbase went public on Nasdaq through a direct listing on April 14 of last year. On its first day of trading it closed at a share price of $328.28, giving it a market capitalization of $85.8 billion. In a traditional Initial Public Offering, early investors and company executives are not allowed to sell their shares for several months under a so-called lockup period. There’s no such prohibition in a direct listing. According to an SEC filing, Coinbase’s Chairman and CEO, Brian Armstrong, sold 750,000 shares on April 14 at an average share price of $389.10, raising approximately $291.8 million for himself. Since then, Coinbase has been on a steady descent. At yesterday’s closing price of $45.98, it has lost 73 percent of its market value from its closing price on its first day of trading. Its CEO, on the other hand, did very nicely for himself.

Another publicly-traded company taking a hit from the FTX fallout yesterday was Silvergate Capital, which fell 12 percent to close at $34.69 on the New York Stock Exchange. (You need to put down any hot liquids you may be holding before you read further.) On August 1 we reported the following about Sivergate Capital:

“FDIC-insured Silvergate Bank is part of the publicly-traded Silvergate Capital Corp., (ticker SI). Silvergate’s website says this about its hot pursuit of crypto: “We began pursuing digital currency customers in 2013 and have been deliberate in our approach to serving this community since then. Today, we have 1,300+ digital currency and fintech customers that are using our platform daily to grow and scale their businesses.”

“Silvergate Capital’s 10-K (annual report) for the year ending Dec 31, 2021 that it filed with the Securities and Exchange Commission acknowledged this about the crypto market that it has so deliberately decided to pursue:

‘The characteristics of digital currency have been, and may in the future continue to be, exploited to facilitate illegal activity such as fraud, money laundering, tax evasion and ransomware scams; if any of our customers do so or are alleged to have done so, it could adversely affect us…’

“Silvergate’s 10-K also states that ‘Deposits from digital currency exchanges represent approximately 58.0% of the Bank’s overall deposits and are held by approximately 94 exchanges.’

“Let’s pause for a moment to digest that last statement: More than half of a federally-insured bank’s deposits are tied to crypto while federal regulators are twiddling their thumbs and letting it happen. This news comes despite the fact that legendary investor Warren Buffet has called the largest cryptocurrency, Bitcoin, ‘rat poison squared’; global economist, Nouriel Roubini, told the Senate Banking Committee in 2018 that ‘Crypto is the Mother of All Scams and (Now Busted) Bubbles While Blockchain Is The Most Over-Hyped Technology Ever, No Better than a Spreadsheet/Database.’ More recently, Bill Gates, co-founder of Microsoft, one of the most valuable tech companies in the world, stated that cryptocurrencies are ‘100% based on greater fool theory.’ And just this past June 1, more than 1,600 scientists and software engineers wrote to Committee chairs in Congress to warn that both crypto and blockchain are shams.”

The longer U.S. regulators take to finally rein in crypto scams, the bigger the hit will be to the reputation of the U.S. as a legitimate and safe place to invest and trade in regulated markets.